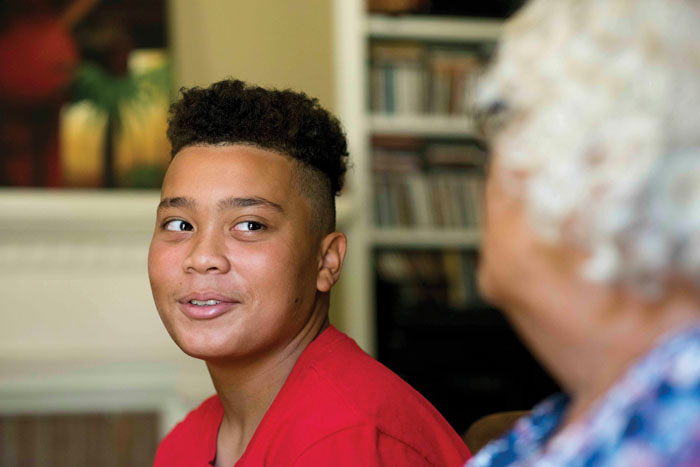 'You have the expectation in your seventies you will do what you want to do. Now our first priority is Elijah,' Beth says. JON C. LAKEY / SALISBURY POST 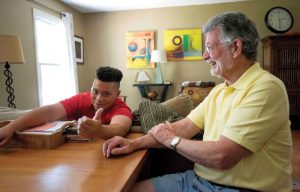 Bob Foreman (right) and his wife Beth (off camera) talk about the pros and cons of raising their grandson, Elijah (left). JON C. LAKEY / SALISBURY POST

At the Rowan Opioid Forum on May 15, Dreamland author Sam Quinones stated that grandparental custody is “skyrocketing” due to addiction.

Senate Bill 1091, “Supporting Grandparents Raising Grandchildren Act,” made its way to the President’s desk on June 26. The bill says between 2009 and 2016, the incidence of parental alcohol or other drug use as a contributing factor for children’s out-of-home placement rose significantly.

Local attorney Mary Blanton agrees. Blanton often serves as attorney for grandparents seeking custody of their grandchildren. While she has no hard data, she says over the past five years, there’s been a significant increase in the number of cases her practice has handled.

The leading causes, she says, of grandparents or other relatives — and sometimes unrelated third parties — are parents voluntarily leaving a child for a significant period of time due to substance abuse; mental health issues; and law enforcement and/or social services intervention with the children, among others.

Judge Beth Dixon, who has served the District Court for over 18 years, says that although the opioid epidemic has just reached public awareness, it’s been evident in the court system for over a decade. She says initially grandparental custody cases were due to parents’ inability to provide for their children. Now it’s predominantly substance-related.

Marvin Moore, principal at Isenberg Elementary School, concurs. He has a significant number of students who live with grandparents or other relatives.

“What I’m noticing here in our building, you’re seeing grandmom, auntie, cousin, more and more kids being displaced from their parents than ever before.”

In the seven years he’s served at Isenberg, the number, he says, has grown incrementally. He notices a couple of other causes not mentioned by those in the legal community, including incarceration. He observes more women are being incarcerated than before, which of course can devastate a single-parent household, he says. He notes that “back in the day” kids went to live with others due to poverty or a parent’s inability to maintain a household. Today the reasons are much more complex.

How custody is changed.

Generally kids go to live with grandparents in one of two ways. If DSS has intervened in the home situation because of abuse or neglect, the grandparents may be called in to care for the child.

The goal of Child Welfare Court — those cases where DSS is involved — is to eventually reunify the child with the parent, Judge Dixon says. A judge may work with a family for years to revisit efforts to reunify.

In Civil Court — those cases involving a private attorney — she says once the custody is awarded and visitation is worked out, the situation is considered final.

“Every case is about ‘that child’ and what’s best for his interests. The law calls that the ‘Polar Star,’” Dixon says. “As far as the best case scenario, if the child can’t be with the parent, that (grandparents) is the next best thing. You’re maintaining family relationships, maintaining family traditions, preserving the child’s feeling of who he is.”

Some grandparents, she says, want to adopt the grandchildren. Others want just to have custody and leave hope available to the parents for regaining their children. In some families, Dixon says, grandparents share — as in maternal and paternal grandparents having joint custody. She’s seen it happen and says it seems to be working well.

Blanton says grandparents may have a better shot at custody than other unrelated third parties, such as boyfriends, because they would be more likely in the judge’s eyes to have long-standing relationships with the child.

Of course grandparents or others can care for the children without legal custody. But it’s tricky, all sources agree, as HIPAA laws mandate who can and cannot seek medical care for children. Schools are required by law to share information with those who have a legal right to see it.

Many of Moore’s students are living with other family members, and these may or may not be grandparents. It’s been his experience that oftentimes the student is more stable with a grandparent because at their age, grandparents often have more established resources to offer the child. He observes that when a child goes to live with an aunt or other contemporary of the parent, they may be in a similar situation to the parent, and vulnerable to the factors that led the parent to lose custody in the first place. First among those is poverty. When this happens, the child may move from one home to another to another.

“If they go to live with someone who is not far from the situation they are in themselves, the likelihood of the child staying there for any length of time, is not good,” he says.

Effect on the children.

Multiple moves can seriously affect a child, he says. “Kids who live in transition for the most part are pretty much independent kids — they have to be. They grow up faster. Perhaps their innocence has not been preserved. Their sense of innocence is not there. They are much more aware of their surroundings because they’ve had to be — because of survival.”

“With mental health, the product is they are living with the grandmother. The thing that makes it hard is ‘the why.’ The work is always in ‘the why.’ ‘Why are you here?’ That’s the thing I try my best to understand is ‘the why.’ It’s the only way we can be of help.”

“The kid is already thinking something is wrong if I’m not with my mom or dad,” he said. “I truly believe, these are my thoughts, if the child gets a lot of love, whether it’s custodial or non-custodial, they are more resilient.”

Fortunately, according to Dixon, many children are happy in the custody of their grandparents.

“Truly if it weren’t for grandparents, our foster system would be overrun,” she says.

Blanton looks forward. “…And I wonder about the future. Will there be any grandparents stable enough in their own lives that they are willing and able to step in to help children in another generation?