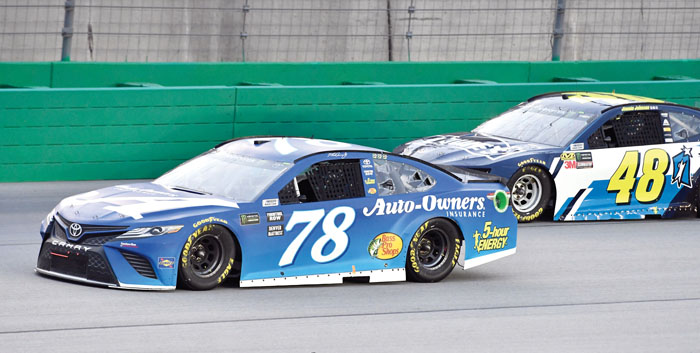 Truex’s No. 78 Toyota Camry appeared even more dominant than last July as he led five times for 174 of 267 laps and swept the first two stages from the pole. The defending Cup champion was always in contention in the 400-mile race, even while trailing. He proved it at key moments late, overtaking Keselowski on lap 201 and Busch 23 laps later to become Kentucky’s first back-to-back winner, earning his fourth victory this season and 19th of his career.

Ryan Blaney and Keselowski were next in Fords, followed by Kyle Busch (Toyota) and Kevin Harvick (Ford).

Dominant as Truex was a year ago in leading 152 of 274 laps, Busch and Keselowski loomed as favorites after combining for five victories in the previous seven races. Keselowski’s knack for winning this race in even-numbered years was especially compelling, and for a moment it looked like he might do it again with a bold rush off pit road to claim the lead entering the final segment.

Truex soon took care of that before Busch grabbed the lead on lap 210, a brief edge as the defending Cup champion took over for good 14 laps later.

Truex’s dominant run to victory last July provided an opening some hoped might expand membership in Kentucky Speedway’s exclusive winner’s club. He turned out keeping things the same by taking control when he wanted.

It was that way all night for Truex, who led 51 laps to win the first stage and led 118 after claiming the second. Even when he trailed, it wasn’t by much as he stayed close enough to make a run.

Rounding out the top 10 were Kurt Busch, Erik Jones — who started second in a Toyota — Aric Almirola, Kyle Larson and Joey Logano. Larson ran in the top five for much of the night, an impressive performance considering he started from the back of the field as penalty for missing driver introductions.