Other Voices: Give fighting dogs a second chance 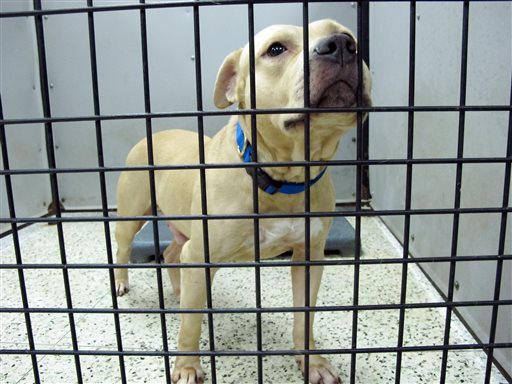 A dog seized during the second-largest dog fighting bust in U.S. history in 2014 sits in a pen at a kennel in Jacksonville, Fla. Police detectives and prosecutors around the U.S. say that despite being banned in all 50 states, the ancient blood sport of dogfighting is thriving in the underground, with hundreds of thousands of dollars at stake on big matches. investigators: the three largest dogfighting busts in U.S. history have occurred since 2009. But state laws still require no minimum mandatory jail time, so while arrests and convictions can be disruptive to dogfighting rings for a short while, the practice continues to flourish. (AP Photo/Jason Dearen)

Dogfighting is a felony in all 50 states because the blood sport — usually accompanied by heavy wagering — is cruel to dogs. Yet in North Carolina most dogs rescued from such operations face an even harsher fate. Those that show scars and wounds from fighting are deemed dangerous and usually euthanized.

Executing the victims is a paradox at the center of an Orange County dog fighting case that raises questions about whether the state’s law is too rigid and what options might be available to spare fighting dogs.

The case and its issues were described in a recent report by Christy Kuesel of The Durham Herald-Sun. The case began with a drug raid on a Rougemont property March 2. Authorities found 30 pit bulls as well as fighting pit and animal records.

The dogs’ owner, Daniel Isiah Crew Jr., was arrested a month later on multiple counts of dogfighting and cruelty to animals. The dogs have been held since at the animal shelter in Chapel Hill as evidence.

Under state law, all the fighting dogs are deemed “dangerous dogs” and subject to being euthanized. But municipal and county governments are free to adopt their own programs for controlling dangerous dogs. That’s what happened in this case.

Orange County Animal Services and the American Society for the Prevention of Cruelty to Animals jointly evaluated the dogs. Eight have been found suitable to be spared and adopted.

Dr. Pamela Reid, vice president of the ASPCA Anti-Cruelty Behavior Team, said, “The ASPCA believes that all dogs, including dogs seized in suspected dogfighting cases, should be viewed as individuals and carefully evaluated to determine the most appropriate and humane course of action.”

However, she added, that not all dogs can or should be saved. She said, “Some dogs exhibit highly aggressive behavior and we feel humane euthanasia is an unfortunate but necessary step to safeguard the public and end the suffering of these animals, who have been exploited by individuals for personal, criminal gain.”

That is a humane approach, but not one without risks. Euthanizing dangerous dogs isn’t necessarily heartless. It’s intended to protect people and other dogs. And eliminating dogs trained to fight can be seen as part of the price of cracking down on dogfighting itself.

Nonetheless, there is evidence that such dogs can be trained to be safe companions. The ASPCA evaluated 49 dogs involved in the dogfighting case of former NFL quarterback Michael Vick and found that all but one could be safely adopted or kept under animal sanctuary conditions.

Bob Marotto, director of Orange County Animal Services, said his agency’s experience with assessing the 30 dogs has shown the need for more flexibility in determining whether a dog is dangerous.

“This experience has certainly prompted me and others to wonder whether or not North Carolina’s dangerous dog law could be written in s way that is not so damning for dogs that come out of these circumstances,” he said.

Orange County authorities have gone to great lengths to prosecute dogfighting and provide a second chance for some of the dogs involved in the Crew case.

State lawmaker should do the same. State lawmakers should study the extent of dogfighting in North Carolina — one of the top states for this vicious activity. Then they should assess what can be done to end dogfighting without ending the lives of its victims.