Greinke again rules on road as Diamondbacks shut out Braves 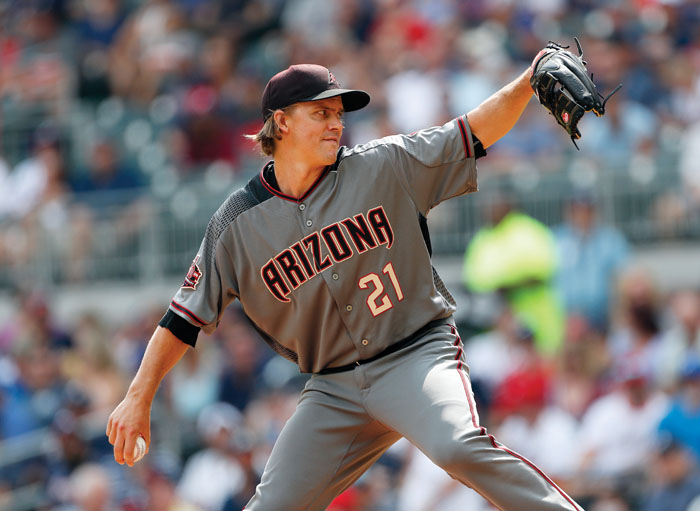 Greinke added another road win to his strong first half by allowing only four hits in 7 2/3 innings, extending Atlanta’s offensive slump, and the Diamondbacks shut out the Braves 3-0 on Saturday.

“He was fantastic,” Lovullo said. “Our guy, our All-Star goes out there and pitches into the eighth inning and really was in control every inning.”

Greinke (10-5), named to the NL All-Star team on Thursday as a replacement for Chicago’s Jon Lester, has won five straight decisions. The 34-year-old right-hander has been especially strong away from home, winning five straight road starts since June 8.

Greinke had seven strikeouts, did not walk a batter and allowed no more than one baserunner in any inning.

Even though he has not lost since June 13 against Pittsburgh, Greinke said he felt stronger than in other games, including his last start against San Diego.

“It felt good from the get-go,” Greinke said. “Way different from the last game. … My fastball was really good today. That kind of made all the other pitches better.”

Ketel Marte hit a sixth-inning homer for Arizona, which has won the first two games of the three-game series and has matched its 2017 team record of 53 wins before the All-Star break. The Diamondbacks began the day one-half game behind the first-place Dodgers in the NL West.

“I’ve asked these guys openly to make sure they come out and play good baseball before the break and coming out of the break,” Lovullo said. “It’s very important to us. I’m proud of them. They’re executing and playing good baseball. That’s the bottom line.”

The Braves, who have lost eight of 10, remained 1½ games behind Philadelphia in the NL East.

An offensive slump is a big reason Atlanta fell out of first place this week after holding at least a share of the division lead since May 31. The Braves have scored no more than two runs in six of their last nine games.

“You know you’re going to go through this,” said Braves manager Brian Snitker. “We went a long time without experiencing it. We’re in a rut here, but you look up and we’re still in the thick of it. We’re still close.”

Brad Boxberger pitched around a one-out single by Nick Markakis in the ninth for his 24th save.

BOSTON (AP) — Xander Bogaerts hit a game-ending grand slam with one out in the 10th inning, and J.D. Martinez hit his major league-leading 29th homer to carry the Boston Red Sox to a 6-2 victory over the Toronto Blue Jays on Saturday.

Martinez increased his major league-leading RBI total to 80 with a solo shot and red-hot Mookie Betts extended his hitting streak to 12 games with three singles to raise his majors’ best average to .362 for Boston.

The AL East-leading Red Sox had their 10-game winning streak halted Friday. They haven’t lost two straight since June 19 and 20.

Betts reached on error against Chris Rowley (0-1) when shortstop Gurriel, who moved there in the top of the inning, had his grounder go right through his legs. Brock Holt had a hit-and-run single and Martinez was intentionally walked before Bogaerts hit his shot to left-center.

Craig Kimbrel (2-1) pitched a hitless 10th for the victory.

CHICAGO (AP) — Jorge Bonifacio homered for the first time since he was suspended for testing positive for a performance-enhancing substance, and Kansas City beat Chicago for just its second win in July.

The 25-year-old Bonifacio broke into the majors last year, hitting 17 homers in 113 games for Kansas City. But he missed the first part of this season after a positive test for Boldenone, resulting in an 80-game suspension.

Duffy (5-8) struck out eight while pitching seven innings of four-hit ball. He tossed six scoreless innings at Minnesota on Monday night, but left with a no-decision after the Twins rallied for a 3-1 win.

The NL East-leading Phillies have scored only 24 runs in their past nine games.

Nola (12-3) needed 31 pitches to get through the first. After he loaded the bases with none out, one run scored on a groundout, and another came home on Martin Prado’s two-out single. In that one inning, Nola surrendered as many runs as he had given up in his previous three starts combined.

Cole (10-2) allowed one run and three hits with four walks after being activated from the bereavement list prior to the game. He threw six shutout innings in his last start Monday against Oakland.

Wilmer Flores, Jose Reyes and Kevin Plawecki each had two hits as the light-hitting Mets scored seven runs for the first time since June 24. New York came into the game last in the National League in batting average and was tied with San Diego for the third-fewest runs scored in the majors.

Wheeler (3-6) was brilliant for seven innings before tiring in the eighth in his longest outing since June 19, 2014. He struck out seven and allowed just one hit through the first five innings.

C.J. Cron hit a two-run homer and Jesus Sucre, who entered in the sixth for injured catcher Wilson Ramos, drove in two runs for Tampa Bay. The Rays posted season-highs in runs and hits (20) after entering the game 2-34 this season when trailing after six innings.

PITTSBURGH (AP) — Starling Marte and Gregory Polanco hit back-to-back homers in the first inning, and that was enough to push Pittsburgh victory over the Milwaukee in the first game of a doubleheader.

Marte sent an 0-1 pitch from Chase Anderson (6-7) over the center field wall to put the Pirates ahead 1-0. Polanco then drove Anderson’s 3-2 offering over the wall in right for his 15th long ball.

PITTSBURGH (AP) — Starling Marte and Gregory Polanco hit back-to-back home runs for the second time on the day, and Pittsburgh won the second game of a doubleheader over Milwaukee.

With the Pirates leading 3-0 in the eighth, Marte hit his 13th homer over the left-field wall before Polanco hit his 16th over the wall in right-center to make it 5-0.

CLEVELAND (AP) — Austin Romine came all the way around to score when Cleveland committed two errors on his routine double in the seventh inning, and the New York Yankees edged the Cleveland Indians 5-4 on Saturday night.

Didi Gregorius hit a three-run homer and Greg Bird added a solo shot for the Yankees, who moved 30 games over. 500 and kept pace with the AL East-leading Boston Red Sox.

Indians All-Star Jose Ramirez belted his 29th homer, giving the third baseman as many homers as he had all last season — and tying Mickey Mantle’s record for the most by a switch-hitter before the break.

Yankees manager Aaron Boone missed all the action. He was ejected in the sixth inning following another strange play.

Giancarlo Stanton swung and missed at 0-2 pitch that appeared to glance off the slugger’s hand. Boone argued that it should have been a foul ball, and was tossed after an animated argument. By rule, a strike is called even when the ball hits a batter while swinging.

Yankees: C Gary Sanchez (right groin strain), who has been sidelined since June 25, begins a minor league rehab assignment with Triple-A Scranton/Wilkes-Barre on Sunday. Barring a setback, Boone plans to have him catch New York’s first game after the All-Star break on July 20 against the Mets.

Indians: LHP Andrew Miller pitched live batting practice at Double-A Akron as he moves closer to a return. The elite, late-inning reliever has been sidelined since late May with inflammation in his right knee. Miller will likely pitch in some minor league games during the All-Star break.

Cleveland catcher Yan Gomes has been named to the American League All-Star team as an injury replacement for Tampa Bay’s Wilson Ramos. This is Gomes’ first All-Star trip.

Indians All-Star RHP Trevor Bauer (8-6, 2.23 ERA) takes on RHP Masahiro Tanaka (7-2, 4.68 ERA) in the series finale. Bauer has made seven straight quality starts with at least eight strikeouts and no home runs allowed, one shy of Pedro Martinez’s record set in 2002. Bauer will only pitch in Tuesday’s All-Star game if it goes to extra innings.