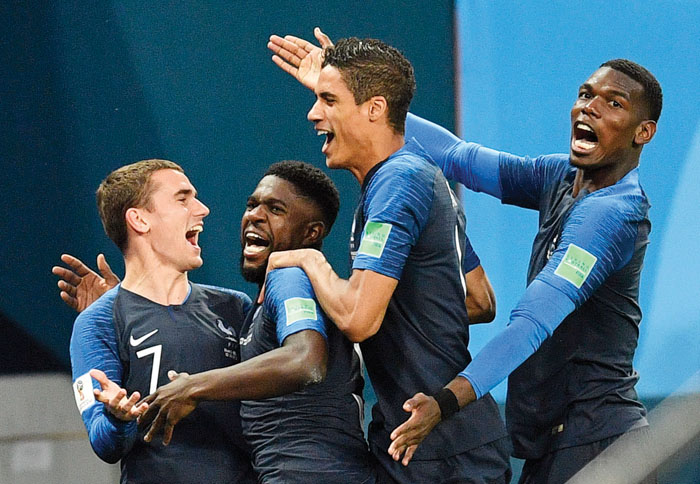 MOSCOW (AP) — France is the established power with a young team full of speed and skill. Croatia has the veterans that have shown they can never be counted out.

The two sides will meet on Sunday in the World Cup final, with France going for its second title in its third final in 20 years. Croatia, a country that only gained independence in 1991, will be playing in its first.

“Tradition is there to be demolished,” Croatia coach Zlatko Dalic said Saturday. “I’m not interested who is the opponent.”

Most consider France to be the favorite for the match at the Luzhniki Stadium, just like two years ago when the country’s national team faced Portugal in the European Championship final at home.

But perhaps feeling complacent after beating Germany in the semifinals, France flopped.

“I don’t think it’s going to happen again,” said France captain Hugo Lloris, who has been stellar in goal during this year’s tournament. “We are far from thinking on our side that we have already reached the goal.”

Lloris was the goalkeeper in that 1-0 loss in Paris, facing a Portugal team that had reached the final after some extra-time victories.

Croatia has done the same this year, needing penalty kicks to beat Denmark and host Russia before defeating England in extra time in the semifinals.

France coach Didier Deschamps has made some changes to his team, however. Fourteen, to be exact, from the 23 players who made up the squad two years ago.

Another factor in France’s favor is rest. The French had only two days of rest between the Euro 2016 semifinals and the final. This time, they have four full days to recover, one more than Croatia.

“A lot of things have changed,” Lloris said. “Especially when it comes to recovery and preparation time.”

Croatia has also played a lot more soccer in its six matches in Russia. With its last three matches going to extra time, the team has played a full 90 minutes more than France. There was also the added stress of two penalty shootouts.

That’s all behind them.

“Now, there is no pressure,” Dalic said through a translator. “Simply this is the greatest moment in the life of all of us. We have come here to enjoy the final.”

Croatia has not beaten France in five games since being accepted as a FIFA member federation in 1992.

The first match was the most momentous — a 2-1 win for France in the 1998 World Cup semifinals at Stade de France outside Paris.

Both teams were unbeaten in the group stage, and France has trailed for only nine minutes in the entire tournament.

Argentina’s 2-1 lead in the second half of a round-of-16 game was wiped out by defender Benjamin Pavard’s long-range shot. Kylian Mbappe then exploded for two quick goals in the 4-3 victory.

Croatia’s 3-0 win over Argentina was a standout performance in the group stage. The team also never trailed in wins over Nigeria and Iceland.

It’s been different in the knockout rounds. Croatia conceded the opening goal in each game before rallying to advance.

ST. PETERSBURG, Russia (AP) — For Belgium and England, the third-place match at the World Cup was more like a dress rehearsal for future finals.

At least they hope.

The Belgians earned their best World Cup finish by beating England 2-0 on Saturday in a match both saw as the start of a push for the European Championship title in 2020 or the World Cup in 2022.

“With this winning mentality you can win trophies,” said Eden Hazard, who scored Belgium’s second goal. “In two years, in four years, we will be better. We have young players. They are very good also in the team. They push all of us.”

Thomas Meunier and Hazard both scored at St. Petersburg Stadium in a match between the two semifinal losers.

France and Croatia will play in the final on Sunday at the Luzhniki Stadium in Moscow. The French beat Belgium on Tuesday in the semifinals, while the Croats defeated England on Wednesday.

England matched its best World Cup result — fourth in 1990 — since winning the tournament for the only time in 1966.

Both Belgium and England were playing for the seventh time in 26 days, but the Belgians entered the match with an extra day of rest.

Meunier’s goal matched a World Cup record for Belgium by having 10 different players score in a tournament, something only done before by France in 1982 and Italy in 2006.

Meunier scored in the fourth minute, knocking a cross from Nacer Chadli past England goalkeeper Jordan Pickford. Hazard added the other off a pass from Kevin De Bruyne in the 82nd.

Toby Alderweireld denied England’s best chance of the game, sliding on the goal line to clear a shot from Eric Dier.

Belgium’s previous best finish at the World Cup was fourth, but the team outplayed England in the midfield to go one better this time.

The Belgians could easily have scored more, with Pickford making a good save to stop a shot from De Bruyne in the 11th and Alderweireld volleying narrowly over the bar in the 35th.

England made set pieces the cornerstone of its run to the World Cup semifinals and created chances for Harry Maguire and Dier in the second half. Neither hit the target with their headers.

It was the second time England and Belgium met in this year’s tournament. In the group stage, both teams had already qualified before Belgium’s 1-0 win in Kaliningrad.

England coach Gareth Southgate made five changes to face Belgium, but Danny Rose and Fabian Delph made little impact while Dier started slowly but threatened in the second half.

Phil Jones failed to intercept the pass which led to Hazard’s goal.

Kane is still placed to win the Golden Boot with a tournament-leading six goals ahead of Sunday’s final.

Kane last scored in England’s win over Colombia in the round of 16. On Saturday, he slipped as he shot wide in the first half, then failed to make contact with Jesse Lingard’s cross early in the second.

Romelu Lukaku couldn’t add to his four goals for Belgium and was substituted shortly after misjudging a through ball by De Bruyne.

The next major tournament is the 2020 European Championship, which will be played at venues across the continent but with the semifinals and finals in London at Wembley Stadium.

England defender John Stones said that could be a boost after the surprise run to the semifinals in Russia prompted a surge in support for the team at home. But Southgate said England still has a long way to go.

“We’ve finished in the top four, but we’re not a top-four team yet,” Southgate said. “Against the very best teams, we’ve come up short.”

James Ellingworth is at https://twitter.com/jellingworth