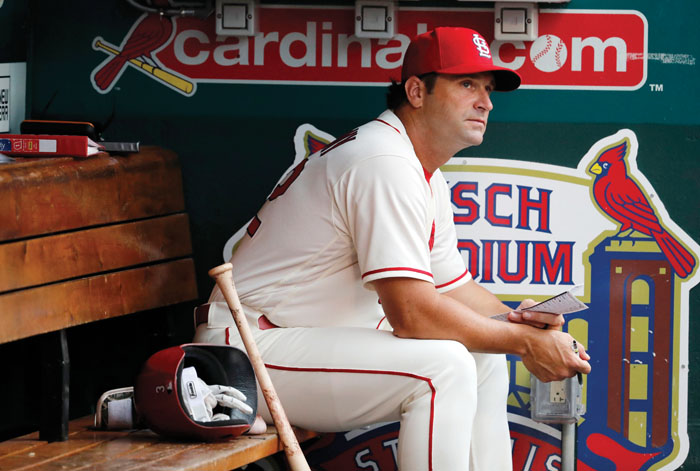 St. Louis Cardinals manager Mike Matheny sits in the dugout before the start of the fourth inning of a baseball game against the Cincinnati Reds, Saturday, July 14, 2018, in St. Louis. (AP Photo/Jeff Roberson)

ST. LOUIS (AP) — The St. Louis Cardinals have fired manager Mike Matheny during his seventh season with the team hovering around .500.

The Cardinals announced Matheny’s firing after an 8-2 loss to the Cincinnati Reds on Saturday night, a defeat that dropped St. Louis to 47-46 and seven games back of the NL Central-leading Chicago Cubs.

Matheny went 591-473 as manager, and his tenure included a loss to the Boston Red Sox in the 2013 World Series. Matheny was a Gold Glove Award-winning catcher with St. Louis from 2000-2004 before getting his first managerial job with the club prior to the 2012 season.

The Cardinals made the playoffs in Matheny’s first four seasons before missing the past two postseasons.

ST. LOUIS (AP) — Jose Peraza’s best game at the plate turned out to be Mike Matheny’s last in the Cardinals’ dugout.

Peraza had a career-best five hits, Scooter Gennett drove in two runs and the Reds waited out a pair of rain delays before beating St. Louis 8-2 on Saturday night.

The Cardinals fired Matheny, who was in his seventh year as manager, after the game.

“I felt good,” Peraza said. “I just swung the bat and something happened.”

Following the two delays that totaled 2 hours, 43 minutes, Cincinnati trailed 2-0 after five innings before rallying for eight runs in its final four at-bats.

“This one just got away,” Matheny said. “You’ve got a team that’s swinging the bats very well over there.”

and not letting you get away with many mistakes.”

Gennett hit a 100 mph fastball off Jordan Hicks (3-2) to right field for a single to drive in Billy Hamilton with the bases loaded in the seventh inning to put the Reds ahead 3-2.

Peraza’s 5-for-6 performance came after he had registered four hits on four previous occasions, most recently on April 27 at Minnesota. He tied the game at 2 in the seventh when he singled on a chopper up the middle that bounced off Hicks’ pitching hand to drive in Dilson Herrera.

Cincinnati has won three straight against St. Louis after having dropped 13 in a row to the Cardinals. The Reds are 21-9 since June 10.

“It kind of goes back to when we won two out of there against Atlanta on the road,” Cincinnati manager Jim Riggleman said. “We’ve played some good series against first-place clubs, playoff teams.”

Hicks allowed four runs on four hits, a walk, and one hit batter while recording just one out in the seventh inning.

“That game’s definitely on me,” Hicks said. “I’m supposed to come in and be lock down and that wasn’t the case today.”

Austin Brice (2-2) retired both batters he faced in the sixth after replacing Kyle Crockett, who opened the inning.

Gennett hit a double to left field off Mike Mayers in the sixth inning to score Joey Votto. He has 44 RBIs in 83 career games against St. Louis.

Jack Flaherty allowed two hits in five scoreless innings. He returned following a 52-minute rain delay after the first inning, but was removed from the game after play was halted for 1 hour, 51 minutes after the fifth.

Matt Carpenter hit his 18th home run of the season in the first inning. It was his 19th career leadoff home run and fourth in 2018. He has 36 extra-base hits since May 15.

Yadier Molina started his 1,801st game at catcher to move past Tony Pena into eighth place in combined regular season and postseason starts behind the plate.

Reds: RF Scott Schebler departed in the sixth inning after running into the right-field wall after catching Molina’s fly. “I think he’s going to be all right,” Riggleman said. “It was pretty sore but we’ll probably stay away from playing him tomorrow.”

Cardinals: OF Tyler O’Neill began a 20-day injury rehabilitation assignment with Triple-A Memphis, where he went hitless in three at-bats Saturday with a strikeout at Omaha. O’Neill has been sidelined since July 5 with a left hamstring strain.

RHP Anthony DeSclafani (4-1, 4.43) will face RHP Miles Mikolas (10-3, 2.65). DeSclafani has won his last four decisions and is 5-1 with a 2.30 ERA in eight career outings against the Cardinals. Mikolas will represent the Cardinals at the All-Star Game at Nationals Park on Tuesday but will not pitch.

Greinke again rules on road as Diamondbacks shut out…