A man and his flying machine: 94-year-old Chuck Campbell builds an airplane 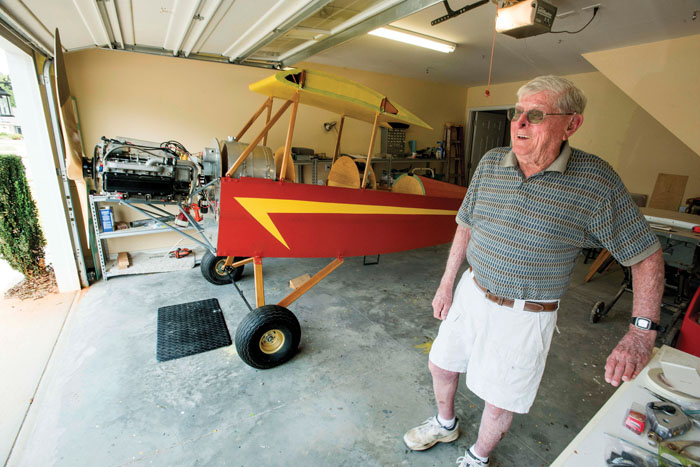 JON C. LAKEY / SALISBURY POST Chuck Campbell, 94-year-old, is nearing completion of his 10 year build of a homemade wood and fabric Pietenpol Air Camper in his garage at his home in Salisbury. Friday, July 13, 2018, in Salisbury, N.C.

SALISBURY — Chuck Campbell talks matter-of-factly about this project in his garage.

All it is, he explains, is wood, metal, fabric, instruments, wheels, a highly modified Corvair engine and high aspirations.

It’s then you have to remind yourself that Campbell is 94 and finds himself on the home stretch of building an airplane — his homemade version of a 1929 Pietenpol Air Camper.

“You get a set of plans and you start cutting wood,” Campbell says, describing how it all started some 10 years ago.

Campbell lives off a cul-de-sac in the quiet, 55-and-older subdivision of The Gables at Kepley Farm. It’s not really a place where you expect to see the fuselage of a plane when your neighbor opens up his garage door.

But there it is, painted in red and yellow with its wooden propeller ready to spin into action. Save for the wings, which are in storage elsewhere, and the tail pieces in a closet, the little tail-dragger looks almost ready for flight.

“Everything is built,” Campbell says, “it’s just a matter of finishing parts and putting it all together.”

Right now, Campbell is working on the cowling over the engine, “which is very, very important,” he says. Windshields for the pilot and passenger also have to be installed.

He has a target date of completing his plane this fall, and Campbell, a World War II Naval aviator, promises he will be the flyboy.

“I plan to fly it, if I can get it done before I die,” he says. “When I finish this airplane out here, I will have to get rechecked to make sure I’m safe.”

After a fellow pilot confirms and signs off on Campbell’s ability to fly, the plane itself will have to be examined by a certified inspector for its air-worthiness. As soon as the plane passes the inspection, Campbell plans to take off on his Pietenpol’s maiden flight.

“When he signs his name, I will get in it and get going,” Campbell says.

What makes Campbell’s building of an airplane more impressive is that he has worked entirely from plans sent to him from the Pietenpol company. This is not a kit he has been putting together, rather something he has constructed from scratch.

While it is based on Bernard Pietenpol’s original 1929 design, which relied on a Ford Model A engine, this plane has Campbell’s own tweaks and preferences, making it one of a kind.

“I knew I wanted to build one, and it seemed the easiest,” Campbell says.

Pietenpols are high-wing monoplanes — a parasol wing above the fuselage. “They claim that’s the most stable kind of aircraft,” Campbell says.

The single-prop plane has tandem seats, with the passenger in front, closest to the nose, and the pilot behind. It’s an open-air cockpit, another reason Campbell doesn’t want to take his first flight in the winter.

Campbell isn’t happy with where he has put the foothold to help him swing into the tight cockpit. He acknowledges getting in won’t be easy period.

The plane’s wingspan is 22 feet, but he’ll attach the finished wings later, when the day comes that the fuselage is loaded onto an open trailer and taken to an airport.

Lengthwise, the Pietenpol is about 17 feet and just fits in the garage.

Campbell’s garage has cluttered work spaces on both sides of the plane. The concrete floor is dotted with paint. Campbell has used exterior house paint, applied with a foam brush.

The entire frame was covered with Dacron fabric and shrunk with a hot clothes iron. The wings and tail pieces were then rib-stitched.

The Corvair engine is horizontal, air-cooled and about 100 horsepower. Campbell expects the plane to have a cruising speed of about 75 knots, or 80 to 82 mph.

The front wheels are about the size you might find on a small lawn tractor. He purchased them from a guy in Texas.

The cockpit includes a tachometer, altimeter and readouts for air speed, oil temperature, exhaust and voltage. “People tell me I have too many instruments for this airplane,” Campbell says.

A middle stick controls the plane’s elevators and ailerons.

“I learned to fly with one like that,” Campbell says.

The cockpit also includes the throttle, fuel control and foot pedals. Campbell designed the 20-gallon fuel tank, which filled will give him about four hours of flight time.

Campbell estimates his plane will weigh about 1,200 pounds.

Campbell grew up in Carrboro, graduated high school at 17, entered the Navy on July 25, 1941, and by age 19, he was the youngest graduate of Navy Flight School.

He held that distinction until later-to-be-President George H.W. Bush came along and topped him by five months.

“There was some shooting and bombing in there,” he says modestly of those days.

His active duty ended on Christmas Day 1945, but Campbell would serve for decades to come in the Naval Reserve and the Army National Guard. He was called back to active duty during the Korean War to be a flight instructor in Pensacola, Florida.

All told, Campbell served more than 40 years in the military. He estimates he logged 8,000 or more military and civilian flight hours since he began flying.

Campbell says he left the Navy Reserve only because he had nowhere to go after being a senior commanding officer in Norfolk, Virginia. He resigned and joined the Army National Guard, for whom he learned to fly helicopters.

Before his military retirement, Campbell was the oldest helicopter pilot in the N.C. National Guard.

Apart from his reserve obligations, Campbell attended the University of North Carolina at Chapel Hill for four quarters after World War II. He and his wife, Mary, left for California immediately after their marriage in 1947, and Chuck enrolled at Northrup Aeronautical Institute in Hawthorne.

A recession hit in 1949, and the couple returned to North Carolina. After his active duty service during the Korean conflict, Campbell started a long career as a technical writer for Western Electric in Winston-Salem.

He took an early retirement at 59, then flew a Beechcraft Baron for Wilco in Winston-Salem, transporting company officials on business trips.

Chuck and Mary Campbell, a nurse trained at Duke University, later flew for a private air ambulance company out of Walnut Cove. The couple had six children, though a son died soon after birth.

Campbell’s passion for flying hit a roadblock when he suffered a heart attack in 1990, and he hasn’t flown a lot since.

His other pastimes have included golf — he has shot his age twice in the past — and he and Mary spent a lot of time traveling across the country in their RV.

Campbell says he rebuilt an airplane “years and years ago.” He stripped the Piper “down to nothing and started all over again with it.”  After his heart attack, he sold that plane to a man in Canada.

His construction of the Pietenpol started at the Campbells’ previous home in Winston-Salem. His son Joel helped cut the Douglas fir strips for the airplane’s frame. Other close relatives have pitched in throughout the building process, making the plane part of the family.

Chuck began the project in a small workshop underneath the Winston-Salem house, then moved things to the garage.

As Mary’s health declined, Chuck and Mary moved to The Gables in Salisbury in 2013. The airplane under construction moved with them.

Mary Campbell died in 2014, just weeks short of the couple’s 67th wedding anniversary. Today, Chuck’s daughter visits her father daily and keeps up to speed with the airplane’s progress and Chuck’s dog, Pippa.

A member of the local Experimental Aircraft Association chapter, Chuck looks forward to the day his fellow pilots can look the plane over at Mid-Carolina Airport.

“I’m hoping they’ll get excited when I take it up there ready to go,” Campbell says.