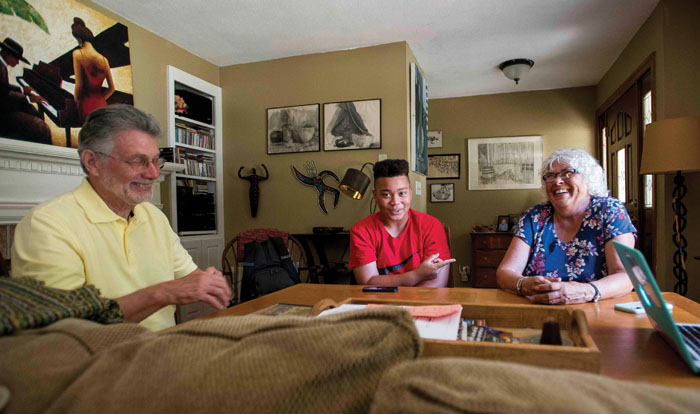 The Census Bureau’s most recent numbers, from 2014, say that one in ten grandparents in the nation – seven million of 65 million – are raising grandchildren. 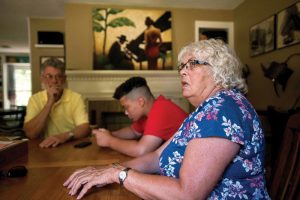 “What we’ve had to get used to is the technology,” Bob says. “We don’t see it as important as he does.”
JON C. LAKEY / SALISBURY POSTBeth and Bob Foreman’s grandson Elijah came to live with them when he was three years old.

It was December 2008, and both Beth and Bob worked in the school system. School was just closing for Christmas. They had two weeks to find a daycare center and make arrangements to raise more children before they returned to work in January.

The Foremans received custody of Elijah and his brother David in August 2009. David is now older but Elijah still lives with his Gramps and Grandma.

The interval, the nine months between receiving the boys and having legal custody, had its challenges. Grandparents who are raising their grandchildren but don’t have custody of them can’t seek medical care for them without written permission of the parent. Schools can’t communicate with grandparents who don’t have legal custody because of confidentiality laws.

“We had some advantages,” Beth starts. “Bob was a magistrate when we lived in New York, and he is familiar with how courts work. I had knowledge of DSS through my job. That was helpful. Even having that knowledge, though, things were challenging…”

Bob finishes her thought. “It would be more daunting for a family who didn’t have our knowledge.”

The Foremans have been careful, even in the toughest times, to maintain a relationship with their daughter, Elijah’s mom. They say this helped all around.

“You’re walking a fine line,” Beth explains, “to do what we need to do for them (the children) and not portraying to the world that your own child has challenges. You want to do the best for everybody, but you don’t want to paint your child as a bad parent, or a bad person.”
Bob adds on: “Whenever we’ve been asked, ‘what is your relationship with your child,’ …we’ve maintained contact even in times when we were frustrated.”

There are two ways grandparents can get custody of their grandchildren, according to local attorney Mary Blanton. Blanton often serves as attorney for grandparents in custody cases.

When DSS must remove a child from the home due to abuse or neglect, NC law mandates they look to extended family first. Grandparents can acquire custody of their grandchildren through this difficult path.

In those cases where DSS is not involved, grandparents who want custody must attain an attorney. Sometimes the parent agrees to relinquish the child. If the parent does not readily give up custody, the grandparents must try, through the attorney, to convince the judge the children will be better served in the grandparents’ home. This can be expensive, usually costing between $5,000 and $10,000.

The Foreman family did hire an attorney, but their daughter agreed for them to have custody of Elijah and David, which definitely made things easier, they say.

“The expense is a significant challenge for grandparents who don’t have the assets to pursue that,” Bob Foreman said. “We were fortunate to have the resources.”

“I think, for me, the biggest challenge has been because we’re active people, keep up the activities that are important for us, while keeping the activities valuable for a child. We are older than Elijah’s peers’ parents, so we parent very differently,” Beth said. “As you age, you have plans for your future. Those plans changed drastically. It’s rethinking and recalibrating your life. We thought we were going to be in the Peace Corps at this stage in our life.

“We’re fortunate and grateful we’ve been able to provide for the boys. We’re also grateful our health has been good. That would impact what we could and couldn’t do. You have the expectation in your seventies you will do what you want to do.

Now our first priority is Elijah.”

Bob has similar thoughts. “It can be hard because having raised three children, we are in a whole different timeframe. Pop culture has changed – technology has come along. There was a style we used with our own children. Discipline has evolved over time.

“What we’ve had to get used to is the technology,” he says. “We don’t see it as important as he does.”

Beth elaborates. “Family values haven’t changed. But there has been some loosening in our parental style. We are still cautious, but we’re not new parents. We’re definitely not as strict with Elijah as we were with our kids.”

Looking back, Beth wishes the community had one thing: a centralized source for grandparents to turn to for resources, whether they need advice on attaining custody, seeking medical insurance, educational resources, or counseling for the children. Grandparents, she says, are “on their own” in figuring out where to turn to get help for their grandchildren.

Elijah, 13, says growing up with grandparents is a little different.

“You see everybody else with their real parents and I’m with my grandparents. I get frustrated sometimes.

“At baseball games, they’re not quiet like the other parents. OMG, she’s like, ‘Elijah! You were supposed to catch that!’ Its so embarrassing.”

Elijah is biracial and shares a little exasperation with having two white grandparents.

“I’m a mixed kid. I like to wear what black people wear. They buy me what white people wear — and when we were driving home from the beach I was listening to NBA YoungBoy and I know Grandma was thinking, like, ‘what is this music?’”

“That’s been an education for us,” Bob says. “Because of having this opportunity of raising them, we’ve done a lot more reading and discussing about race, what’s happening now. It’s really important they understand.”

Elijah cites another example. “We went to Atlanta and I got to go to a black barber shop instead of my grandparents’ salon. It was great!”

Yet, in some ways, Elijah says, growing up with grandparents can be better. He says he gets a lot more things, and he is spoiled. The family went to the beach for a whole week last week. He has friends who can’t do that.

Elijah is a talented baseball player, the grandparents say, and this has afforded them the opportunity to meet younger parents and try to keep up.

“Because he’s been so involved in sports, we’ve met other parents. It’s been valuable. They’ve shared things with us that we didn’t know because they are younger.”

Elijah’s a little protective of his grandparents.

“When I see Gramps carrying the ladder, I think, ‘Don’t fall,’ or see Grandma working in the garden,” he says. “They are older and something could happen.”

“But you don’t come help!” Bob laughs. Elijah laughs, too.

But then he turns serious. “Without them it could have been really bad. Like maybe I could have been homeless for a few days, or not have a roof or phone, or TV, or trumpet or baseball. I’d really have to work hard to have an education or play baseball or have stuff.”

Elijah is a decent student, Beth says, and although his grades could be better, he is respected in the classroom. Education is a big family value in their home.

One concern for custodial grandparents, Beth says, is the rest of the family. A grandchild in the home typically receives more from grandparents for a birthday than grandchildren who live with their own parents. And the other adult children have the potential to feel jealous of the time the grandparents spend with the grandchild in the home. They’re lucky, she says, that their other adult children have been very supportive, concerned only for the toll on the Foremans in raising kids at their age.

Today it’s been ten years since the Foremans received custody of the boys. In the interval, David went back to live with his mother. In recent months the boys’ mom has had some health issues. She and David have moved back home to Beth and Bob’s house. It’s a full house, but “everyone manages,” Beth says with a smile. Elijah smiles, too.