Syndergaard wins for Mets in return from disabled list 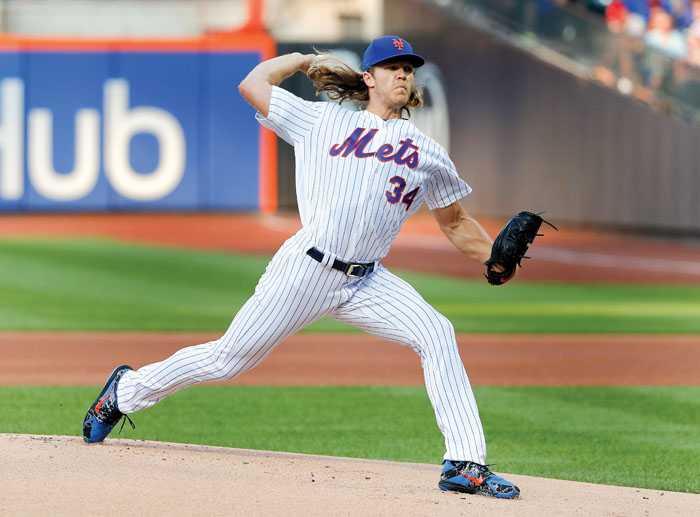 NEW YORK (AP) — Noah Syndergaard pitched out of trouble in a rusty return from the disabled list and helped himself with an RBI single as the New York Mets beat the Washington Nationals 4-2 on Friday night.

Amed Rosario tripled and doubled, both times over Bryce Harper’s head in center field, and the Mets won for only the sixth time in their last 26 home games. Brandon Nimmo had three hits for New York, which built a three-run cushion in the first inning against struggling starter Tanner Roark.

Roark (3-12) became the first 12-game loser in the majors this season. He allowed four runs and eight hits in five innings.

After missing seven weeks with a strained ligament in his right index finger, Syndergaard (5-1) came out firing 99 mph fastballs.

BOSTON (AP) — Kevin Pillar had four hits and Justin Smoak had three, including a pair of homers, and they drove in four runs apiece to help Toronto snap Boston’s 10-game winning streak.

Dwight Smith Jr. also homered for Toronto, which won for the second time in six games. Jake Petricka (1-0) pitched two innings of shutout ball in relief of Ryan Borucki, who lasted just three-plus innings but left with an 8-6 lead.

Mookie Betts had three hits, including two triples, to raise his major league-leading batting average to .357.

MIAMI (AP) — Aaron Altherr drove in his first run of July and later started a sensational relay to protect the lead, helping Jake Arrieta and Philadelphia top the Miami.

Arrieta (7-6) pitched seven innings of three-hit ball. Victor Arano got three outs and Pat Neshek finished the three-hitter for his first save.

Bieber (5-1) was removed after Tyler Wade’s leadoff double in the eighth and Cleveland leading 6-3. Brett Gardner’s RBI groundout cut the lead to two and set up a tense ninth inning.

Closer Cody Allen, who allowed a career-high six runs in the ninth inning against Cincinnati on Tuesday, gave up Giancarlo Stanton’s leadoff homer but recorded his 19th save in 20 chances.

The fourth-place Pirates have won five of their last six. First-place Milwaukee has lost four of five and its lead has been cut to a half-game over the Chicago Cubs.

MINNEAPOLIS (AP) — Joe Mauer homered and drove in four runs, Jake Cave had three hits and a pair of RBIs, and Robbie Grossman added three hits for Minnesota, which has won eight of nine games on its homestand.

Jesse Winker reached base four times and drove in three runs for the Reds, who won their second in a row against St. Louis after breaking a 13-game losing streak to the Cardinals on June 10.

Both teams used emergency starters but neither made it through five innings. Seattle’s Christian Bergman (0-1), a former Rockies pitcher, gave up five runs in 4 1/3 innings and left during Colorado’s four-run fifth inning.

Both teams began the week in first place but have since fallen out. The Diamondbacks began the night a half game behind the Dodgers in the NL West. The Braves fell 1 ½ games behind NL East-leading Philadelphia.

Godley (11-6) gave up three hits in the first, including Kurt Suzuki’s run-scoring single. He allowed only two hits over the next five innings and struck out seven overall.

Brad Boxberger struck out the side in the ninth for his 23rd save.

HOUSTON (AP) — Dallas Keuchel pitched six strong innings, three relievers completed the seven-hitter and Alex Bregman provided the offense by setting a career high with his 20th homer to give Houston a win over Detroit.

Keuchel (7-8) allowed six hits and struck out four to win his fourth straight decision after dropping the previous three. Tony Sipp and Brad Peacock pitched the seventh and eighth innings before Hector Rondon walked one in the ninth for his eighth save.

The Astros got to former teammate Mike Fiers (6-6) early. George Springer hit a leadoff single before the two-run shot by Bregman, which bounced off the wall above the Crawford Boxes in left field, made it 2-0.

Ronny Rodriguez had two hits for the Tigers, who went 1 for 9 with runners in scoring position to lose their fifth straight game.

CHICAGO (AP) — Leury Garcia had three hits and three RBIs, All-Star Jose Abreu homered for the first time in July and Chicago beat Kansas City. Joakim Soria pitched the ninth for his 14th save in 17 chances.

James Shields (4-10) pitched five-hit ball into the seventh inning as the White Sox earned their second straight win after a six-game slide.

Whit Merrifield had two hits and scored two runs for Kansas City, which has dropped 12 of 13. Brad Keller (2-4) was tagged for five runs and seven hits in 2 2/3 innings.