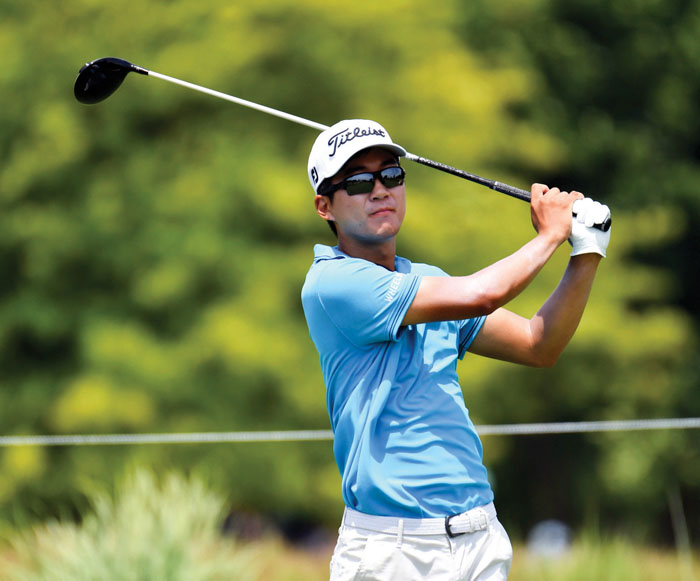 Michael Kim tees off on the ninth hole during the first-round of the John Deere Classic golf tournament Thursday, July 12, 2018, in Silvis, Ill. (Todd Mizener/The Dispatch - The Rock Island Argus via AP)

SILVIS, Illinois (AP) — Michael Kim took a four-shot lead Friday at the John Deere Classic in the Quad Cities, which was suspended twice because of weather concerns.

Kim, who is winless in 84 career PGA Tour starts, was 16 under through 35 holes, with the second round to be completed Saturday morning.

Kim birdied eight of his first 14 holes without a bogey to race past first-round leader Steve Wheatcroft, who shot 68. Wheatcroft was 12 under along with David Hearn (64) and Johnson Wagner (66).

Francesco Molinari was 11 under along with Matt Jones and Bronson Burgoon, who made two eagles on Friday and was 8 under for the round with three holes to play.

The 24-year-old Kim, a former standout at Cal, Kim, pushed his lead to three shots by hitting a wedge from 111 yards to within 5 feet for birdie on the par-4 13th.

Hearn has had an up-and-down year, missing eight cuts. But his irons have been dialed in at TPC Deere Run. He birdied three of the four par-3s on Friday.

“I think I just have good feelings around this golf course. I’ve always enjoyed playing it. I am putting the ball in play off the tee, which isn’t as hard here as some of the other golf courses we play. But when I am doing that, I’m giving myself good chances for birdie,” Hearn said. “The putter has been hot.”

Wheatcroft, who led on Thursday after the best round of his career, made three bogeys on his back nine. But he’s still in position for his first top-10 finish of the season.

“Just need to tighten things up a little bit, and hopefully a good night of rest and get hydrated here and we’ll come back out (Saturday),” Wheatcroft said.

Molinari got his first official PGA Tour win two weeks ago at the Quicken Loans National outside Washington, and the Italian continued his strong play at TPC Deere Run with rounds of 6-under and 5-under.

Renowned for his ball-striking, Molinari hit 12 of 14 fairways and 14 of 18 greens in regulation both Thursday and Friday.

“I’m happy, yeah. The game is still there. I think I can hit my irons a little bit better, especially the wedges. (Thursday) and (Friday have) been OK, but not great, so there is room for improvement,” Molinari said.

Local favorite Zach Johnson, who won at the Quad Cities in 2012 and has seven top-5 finishes at TPC Deere Run, shot a 70 to move to 3-under, just inside the projected cut line.

Friday’s round was delayed by nearly an hour because of poor weather. It was resumed and then called because of another batch of storms that descended on the area.

SYLVANIA, Ohio (AP) — Brooke Henderson has struggled in her past two appearances at the Marathon Classic.

The 20-year old Canadian finds herself tied for the lead after two rounds of the tournament following a bogey-free 5-under par 66 on Friday to move into a tie with Caroline Hedwall. Both are at 9-under 133 through 36 holes.

“It’s just fun to be in contention again and to see your name at the top of the leaderboard, it’s exciting, and hopefully good things will happen,” Henderson said.

Henderson, who won earlier this season in Hawaii and has six career victories, missed the cut last year at Highland Meadows and finished tied for 38th in 2016.

She shot a 3-under 31 on the front nine and then birdied the final two holes, both par 5s, to move into a tie with Hedwall.

“To finish birdie-birdie was really important, and it’s fun to see your name at the top,” Henderson said. “I’m excited to be in the final group.”

Hedwall, who played in the morning on Friday, is looking for her first LPGA Tour victory. This is the first time since the 2015 Handa Australian Open that she has held the lead after 36 holes.

“I’ve been in this situation, and I mean, it was a long time ago, though,” said Hedwall, who shot a 4-under 67 on Friday. “I’m just looking forward to the weekend. This is obviously what you practice and work hard for, to be in contention.”

The 29-year-old Swede has matched a career high for the lowest 36-hole score of her career, which was in Australia. Like Henderson, she also birdied the last two holes to move to the top of the leaderboard.

Thidapa Suwannapura was one shot back and defending champion I.K. Kim was three strokes behind.

Sei Young Kim, who shot an LPGA Tour-record 31-under to win last week’s event in Wisconsin, was eight shots back after a 1-over 72 on Friday.

Daniela Darquea had a hole-in-one on No. 6 from 169 yards out. She joins Nasa Hataoka as the only players on the tour this season to record multiple aces.