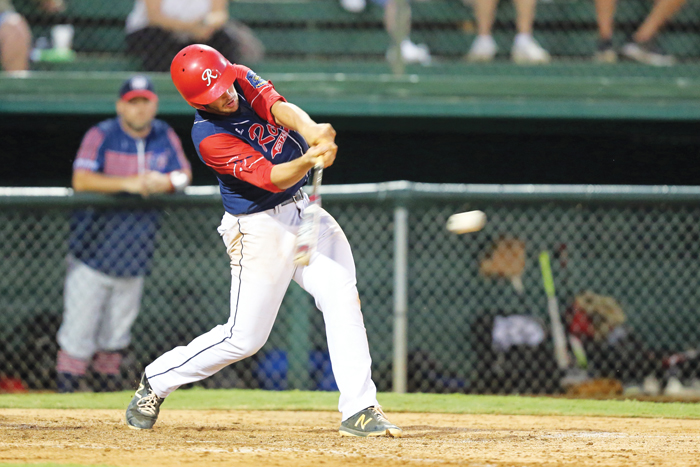 James Sipes/for the Salisbury Post ... Chandler Lippard had two hits and drove in all three of Rowan’s runs during Friday night’s American Legion loss to High Point. The Area III semifinal series is now tied at 1-1, with Game 3 tonight in Thomasville.

Post 342’s 11-game winning streak is history — and so is its advantage in this Area III semifinal series with High Point.

“We just weren’t on tonight,” first baseman Chandler Lippard said at serene Newman Park, moments after Rowan’s 7-3 Game 2 loss allowed the visitors to square the best-of-five series at a game apiece. “I don’t think we were focused, mentally. We were just going through the motions.”

It showed. Rowan (26-7) committed four more errors — that makes nine in the past two games — and yielded four unearned runs. The series shifts to Thomasville’s Finch Field for Games 3 and 4 tonight and Sunday.

“It’s concerning to give up 10 unearned runs in two games,” coach Jim Gantt said after Rowan lost for the first time since June 21. “But bad counts, walking people and throwing the ball around was the difference.”

“Drawing even — that’s what we aimed to do,” Shore said. “This place is sort of cursed for the visiting team. Rowan County has always had good coaching and good players, but they also have some kind of magic working for them, especially in the late innings.”

There was none of that ju-ju in the air last night. Facing winning pitcher Tyrese Hearst and reliever Jake Stroud, Rowan managed six hits and drew four walks. But for the second straight night, its downfall was a defense that had too many holes to stay afloat.

“Errors just killed us tonight,” said Lippard, who botched a sixth-inning pickoff play when he skipped a throw past second base and into left field. “It’s the same old thing — you’ve got to be ready for the next play.”

Lippard prevented a couple more Rowan blunders with error-saving scoops at first base and has been a dependable two-way player this season. His two-run double in the last of the first delivered the game’s first runs and his two-out, run-scoring single to right drew RC within 4-3 in the fifth. But for the most part, Hearst kept Rowan guessing and stayed out of harm’s way.

“He commanded his fastball and controlled the plate,” said High Point catcher Avery Cain, the Ledford High graduate who will join Hearst at Winston-Salem State next season. “His curveball was sharp and he was able to fill up the zone.”

Gantt felt Rowan had some ill-advised approaches against Hearst. “He kind of slowed his body down and fooled us with some change-ups,” the coach said. “We had some hittable pitches, but we swung at the bad ones and took the good ones. I don’t understand that.”

“He had a lot of bad counts,” Gantt said. “I thought he threw too many pitches and worked from behind too much. That’s a recipe for disaster.”

Despite all the questionable plays, Rowan was still only a run down entering the top of the sixth inning. Southpaw Daniel Sell spelled Holshouser and faced five batters. Three scored to stretch High Point’s lead to 7-3. Rowan managed to put a runner on base in both the sixth and seventh frames, but surrendered quietly.

“It just wasn’t our night,” Lippard explained after the crowd quickly dispersed. “We were too laid back. We took the early lead and didn’t keep pressing. It gave them a chance — and that’s always dangerous.”

NOTES: Games 3 and 4 in Thomasville are 6 p.m. starts. … Lippard collected all three Rowan RBIs and leads the team with 39. His first-inning double was Rowan’s only extra-base hit. … Cain’s two-out, two-run single in the third gave Post 87 a 3-2 edge it never relinquished. … Hearst (4-1) beat Rowan for the second time this season. On June 10 at Newman, he allowed just one hit and an unearned run over five innings in a 6-2 High Point victory. … Tonight’s pitching matchup pits Rowan’s Daniel Durham (3-0) against HP’s Landon Smith, a left-hander out of UNC-Pembroke.