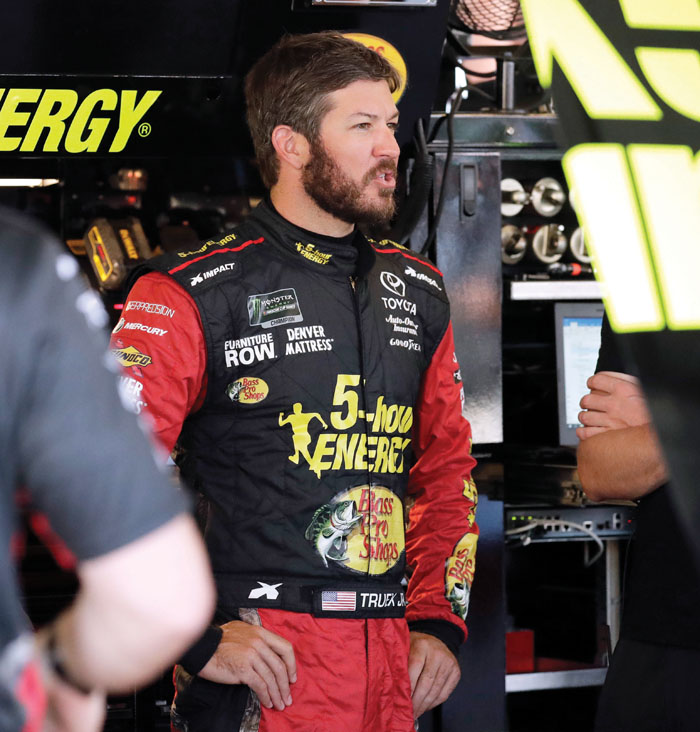 AP Photo/Nam Y. Huh Martin Truex Jr., talks to his crew in his garage during a practice session for the NASCAR Cup Series auto race at Chicagoland Speedway on June 30. The series is in Kentucky this weekend.

The biggest challenge is a demanding screening process.

Just four NASCAR Cup Series drivers have won the seven 400-mile events at the 1.5-mile tri-oval. Brad Keselowski and Kyle Busch have combined for five wins and were favored here last July, but Martin Truex Jr. got the victory on the way to the series championship. Matt Kenseth, the 2003 Cup champion, won here in 2013.

Considering how points leader Busch, second-place Kevin Harvick — who has five consecutive top-10 Kentucky finishes — and Truex have combined for 13 wins this season, the Kentucky Speedway club might stay the same Saturday night.

At the same time, Erik Jones’ victory at Daytona offers hope that a new face might emerge if everything falls right. Truex won the pole on Friday, but Jones joined him on the front row.

“We ran well here last year finishing sixth and you can look back on your notes and say, ‘OK, this is what we did to get to this point,’ or that point and that makes things quite a bit easier from a driver’s standpoint,” Jones said. “Just having that notebook mentally and physically has been a pretty big advantage.”

Whether it’s enough to overcome the Kentucky dominance of Busch and Keselowski remains to be seen.

Busch, Jones’ teammate with Joe Gibbs Racing, has seven victories across all three NASCAR national series at Kentucky. He won most recently in 2015 on the way to the Cup title. He has the top driver rating (125.9) at Kentucky, with two wins, five top-fives and six top-10s in the Cup races. And he enters tied with Harvick with a season-best five wins this season.

Keselowski meanwhile is looking to continue his pattern at Kentucky in even-numbered years, winning in 2012, ‘14 and ‘16.

“I didn’t know how many people believed in numerology in this sport or in this world until I came to Kentucky this year,” Keselowski joked. “I’m not a numerology person, but I appreciate those that are.”

Truex is looking for more of the same from last year, when he led 152 of 274 laps and won under caution. He has won three times already this season and is just 120 points behind Busch in third place.

“To be able to come here last year and get our first win at this track was huge,” Truex said. “We’ve been strong here the last couple of years and hopefully we can figure out how to race up front again all night tomorrow night and have a shot at winning at the end.”

Several other drivers also could get in the mix.

Harvick has five top-10s at Kentucky. Joey Logano has four top-10s, including eighth last year, but will start 19th. Ryan Blaney, 11th in points and hungry for his first win this season, also could break through.

“I’ve enjoyed this race track, whether it was before it got repaved or now,” said Blaney, who will start seventh. “They’re a lot different, the two, and it’s pretty neat that Brad and Kyle have been able to win on both configurations pretty easily. I feel like our team is pretty close to where it needs to be.”