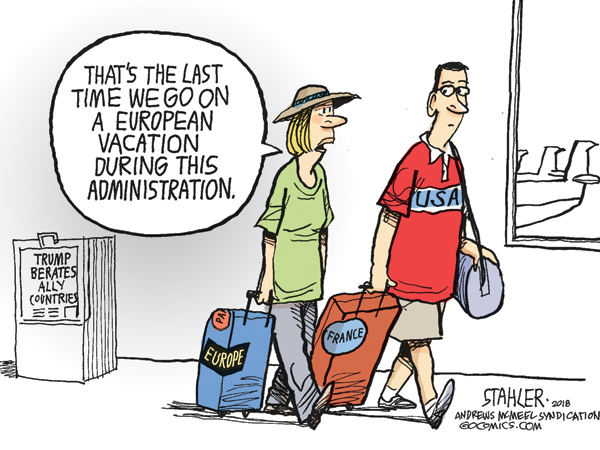 You are so wrong. Capitalism can and has gone much too far, in giving all of the money and power to the wealthy and corporations at the risk of leaving a majority of people destitute.

Social Security is a good example of socialism in the US, and the GOPers continue to try to kill it. A little more democratic socialism and a lot less capitalism would be a welcome change for most of us.

Before using Latin America as an example of failure of socialist leanings, please read “The Shock Doctrine” by Naomi Kline and “Confessions of an Economic Hit Man” by John Perkins. Granted, Perkins  has become a bit of a nut case, but that does not diminish his account of his involvement in the economic warfare waged against the emerging leftist economies in the latter years of the 20th century.

If only we could find a way to examine and debate the realities of what brought us to the place our political world is in 2018 in contrast to the hyperbolic rantings of both sides as “Fear and Loathing in US Politics” plays out in the current environment.

It’s becoming increasingly apparent, though, that some do not want the freedom to choose and decide. Some do not want the responsibility to take care of themselves. They want some parent-like figure making the important decisions for them and providing for them. They are like children who yearn for freedom and responsibility, but do not know what to do with it. So they want that paternalistic government providing and caring for them like the parent unto the child.

Gosh, I’d hate to have an economic system in which the 1 percent owns the government and the middle class is disappearing. That would suck.

How many people are working in jobs they hate because it’s the only way they can get health insurance? One could argue that more people would take the chance on creative or innovative endeavors if an illness wouldn’t bankrupt them.

The top 10 Socialist countries are China, Denmark, Finland, Netherlands, Canada, Sweden, Norway, Ireland, New Zealand and Belgium. These countries have strong workforces. Creativity and innovation do not seem to be a problem.

Then pack up and find you a socialist country, because we will not allow it.

… My Turn, Bruce LaRue: In support of open borders … maybe

Love this. So true but I imagine you will have no support for this activity.

LaRue’s suggestion that the abolition of private property would be a logical or reasonable result of an open border policy is total nonsense, and even misconstrues what an “open border policy” means. Or perhaps he is demanding as a condition for his “support” this reduction to absurdity. His presupposition that his support is so valuable that he can set such terms is sheer arrogance.

It might also interest Mr. LaRue to know that in the EU, residents of a city can vote in municipal elections even if they are citizens of another EU country. With some restrictions they can even hold elected municipal offices. And yet the EU countries are still sovereign, they have simply made an agreement to interact in a certain way.

Political amnesia must be contagious among some Republicans. The current White House occupant is receiving similar treatment as his predecessor. A stated Republican objective was to make Obama a one-term president. The Grand Old Party did all it could to block and sabotage Obama’s progressive programs, some of which led to life-saving legislation.

The Democrats’ response to the current president is understandable. Until there is a resolution of the alleged collusion in the 2016 election, there will be doubt that the sitting president of our nation is legitimate.

It’s odd that Gowdy is concerned about the tearing of our national fabric while expressing impatience over the investigation of voter fraud and election tampering by a hostile foreign government. It was Gowdy who strung out the Benghazi investigation for months.

What does “make our country great again” mean? It’s already great and will be greater in spite of who occupies the White House.

Memory is such a fickle thing. The letter writer appears to have forgotten the almost-universal antipathy by and animosity from the GOP for anything President Obama did or even considered doing.

He also has forgotten that Rep. Gowdy presided over a two-and-a-half year, $7.8 million investigation into Hillary Clinton’s role in the Benghazi terrorist attacks — an investigation that was purposefully strung out as to affect the 2016 election, as Rep. Kevin McCarthy admitted to Fox News’ Sean Hannity. (So it must be true, right?)

The Dems want to take back control of our country for the Deep State’s agenda to enrich their own pockets? That’s exactly what the Republicans are doing for their agenda!

Mr. Tracy states: “Mr. Trump needs to man up to Special Council Mueller to show proof that he (Mr. Trump) is not guilty.”

Mr. Tracy seems to confuse the U.S.A. with Third World/communist countries that believe and enforce “guilty until proven innocent.” Have you considered a move to North Korea or China, Mr. Tracy? They love you liberal Democrats.

When we take back the House, Senate and White House, Democrats will do away with the filibuster and add four or five judges to the Supreme Court, and pack progressives on it. McConnell has shown us the way. May just pass single-payer health care for good measure. Republicans will never be able to take that away from the populace. Cheer up, lefties, our day is coming again.

… ‘This one’s for you, Mr. Peck’: Frances Shepherd’s trip to the Galapagos Islands

Great article, and it was fun to think back on my own high school years at East and Jerry Peck. He was a wonderful teacher. I had him for two years in biology and chemistry. Also had his awesome wife, Flo Breisch Peck for math and still consider her a good friend.

Thank you, Frances, for sharing your awesome experience and for remembering Mr. Peck.

Ms. Shepherd was a great science teacher. I am glad she had this opportunity.

Frances Shepherd, you have been an inspiration yourself to so many students and teachers, like myself — smiling and giving the Lord credit daily and during tough times … always empathetic to the current situation and leaving the conversation with something for us to think about, reminding us that we are so blessed. I’m so glad you were able to fulfill this dream.

Great story of a wonderful person who is passionate about life and science.

Make a campground for horse people with  20 to 30 campsites. We pay $42 a weekend at Uwharrie. That would be over a thousand dollars a weekend.

… Millions of Americans with dirty hands are spreading dangerous bacteria

Sad, isn’t it? After forgetting American history (sometimes, not learned to begin with) and forgetting how to use the English language (that previously parenthetically enclosed statement applying to this as well), the basics of hand washing are being ignored too.

Why is it these people keep getting released and not sentenced to time? We have one from our neighborhood under a half million dollar bond. He has been charged twice in one month and many times in other states. I know they will release him again. Where are all these Alford pleas? Lock them up and make our families safe.

… Inside the world of dog fighting: Rigorous training, vicious fights and big payoffs

Didn’t the FBI make dog fighting a top tier felony in 2015? They need to close legal loopholes by requiring all pit-fighting dogs to be banned from breeding and sales so they don’t boomerang into family neighborhoods.

There was a HEART Federal Bill introduced in April 2018 that needs to be revised to euthanize all fight-bust dogs immediately instead of fostering or re-homing them, which will cause a pit population explosion.

Bust dogs were/are never allowed to breed but, like all dogs, are spayed and neutered before adoption.

Euthanize all fight bust dogs? What? I have rescued numerous fight-bust dogs that have made good family members.

Bait animals die. Pit bulls rescued by misanthropes who want to adopt them out … were trained to kill and they will. If rescue angels would focus on sterilization of the paraphernalia dog fighters use — pit bulls, which have been bred for this purpose for centuries — dogfighting wouldn’t be more popular than it’s ever been before in history. It’s common sense.

The area where I live has often seen these dogs dumped after they are killed in these “fights.” Their broken bodies are heartbreaking. We rescued a bait dog quite some years ago, and he is, beyond a shadow of a doubt, the most loving and compassionate dog ever. Proof that, just like people, dogs can survive and learn to thrive after severe abuse

… Owner of Queen’s Gifts moving on to next chapter

Really going to miss Jane and her store. I could always count on her.

Best of luck to you, Jane, in this next leg of your journey. I will miss Queen’s and seeing your sweet smile.

He was a great man. He was always kind to everyone. He surely will be missed. God bless Becky, his wife, and his family.

I had the opportunity to coach on Carl’s staff at Louisiana Tech. He was the most detailed coach I had been around. Not only a good coach, but a good person.

Other voices: Rein in power to set tariffs