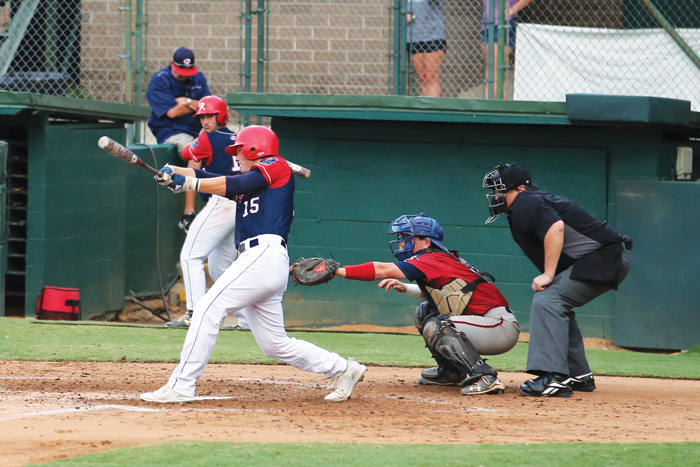 James Sipes/for the Salisbury Post ... Trevor Atwood gets a hit and drives in 2 runs for Rowan during Thursday night's playoff game against High Point at Newman Park. Rowan won, 9-6. July 12, 2018.

SALISBURY — The best thing about Thursday’s Area III semifinal series-opener at Newman Park is that it’s over.

“That was hard to watch,” coach Jim Gantt said after Post 342 hung on for a 9-6 victory over visiting High Point and drew first blood in the best-of-five series. “There wasn’t a lot of good baseball in that game.”

“I don’t think it’s common to see games like this, but when they happen everybody is shocked,” said Rowan catcher Trevor Atwood. “People think we practice every day and should make all of these plays. Tonight, we didn’t.”

Rowan used Atwood’s steamy, line-drive bat and another solid effort by right-handed pitcher John Owen to prevail. But truth be told, the locals tumbled down the stairs and somehow landed on their feet.

“That was ugly baseball. I’m sure Coach Gantt would say the same thing,” losing coach Rob Shore said after High Point (16-7), the No. 2 seed out of the Northern Division, made three costly errors and also surrendered six unearned runs. “John Owen was the difference. I would take him anytime. He works off the plate and makes you swing the bat. He did a great job.”

Owen persevered through six innings without yielding an earned run, yet trailed 3-2 when Rowan came to bat in the last of the sixth. His signature off-speed pitches were late for the party — arriving in the middle innings – but he became a seven-game winner when Rowan batted around and erupted for seven runs in the sixth.

“For the first three innings, I had to rely on my fastball,” Owen said after making 80 deliveries and allowing four hits. “I couldn’t get my curve and change-up to work. And against a team like this, you can’t try to just blow it past them. I had to keep working to figure it out.”

Owen struck out four, walked one, induced nine groundouts and retired 10 of 11 High Point hitters between the second and fifth innings. He set Post 87 down in order in the first, fourth and fifth. “Thank God for John Owen,” Gantt said.

Despite all the ugliness, it was a tense match throughout. Atwood gave Rowan its first lead when he pumped a two-run, second-inning single to center against HP starter Alec Hunter. “I kept fouling stuff off,” Atwood said. “I’m pretty sure I saw every pitch he had. I battled him and finally got one over the plate and made good contact.”

The guests reclaimed the lead with two unearned runs against Owen in the top of the sixth. The first scored when catcher Avery Cain reached on a leadoff error and Mark McLamb followed with an RBI-double into the left-field corner. Post 87 went up 3-2 when Jackson Leck pumped a two-out single to left.

Rowan tied the score against losing pitcher Connor Smith in the bottom of the sixth. Atwood jerked a first-pitch double down the left-field line and scored four batters later when CP Pyle coaxed a bases-loaded walk. Teammate Bryson Wagner’s bloop single to right made it 4-3 and when Cameron Graham’s slow grounder slipped through a drawn-in infield, RC had a two-run lead. Then everything got sloppy.

“We felt pretty good with a 3-2 lead in the sixth inning,” Shore said. “Then the circus broke out. It looked like the Ringling Brothers showed up in High Point uniforms.”

Two late-game errors — one on an outfielder’s overthrow and another when Cain fired a ball into center field — led to four more Rowan runs and a 9-3 lead. Wagner relieved Owen the High Point seventh and struck out the side, but not before Post 87 loaded the bases and cleared them on a bizarre, two-errors-on-one-swing mishap.

“We had a few errors,” said Wagner, who kept his office clean at second base and had five assists. “It was mostly lack of focus. We have to focus on every play, every time.”

Owen, more than anyone, was grateful when Wagner fanned Dalton Ward to conclude the debacle.

“It was crazy,” he said. “But in the end, everything kind of lined up for us tonight.”

NOTES: Atwood went 3-for-4 and drove in three runs, giving him 34 this season. … Hunter, who braided a lively fastball with a mesmerizing change-up, allowed two runs on two hits in five innings. He struck out nine and walked four. … Gantt said left-hander Maddux Holshouser (2-2) with start tonight. High Point will counter with Tyrese Hearst, a right-hander out of Winston-Salem State.