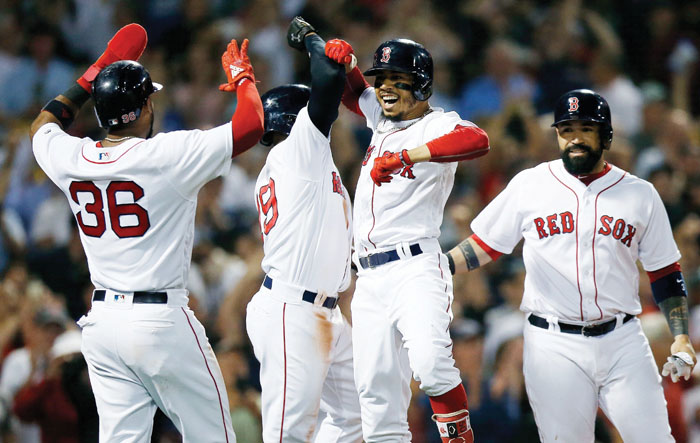 Boston has the longest current winning streak in the big leagues and hasn’t lost since getting routed 11-1 at Yankee Stadium on July 1. At 66-29, the Red Sox are 37 games over .500 for the first time since 1949.

All-Star lefty J.A. Happ (10-6) started strong for Toronto, striking out six and holding Boston to two hits before running into trouble and some misfortune in the fourth.

CLEVELAND (AP) — Aaron Hicks drove home Didi Gregorius from first base with a one-out double in the eighth inning off Cleveland ace Corey Kluber, sending New York to a win over the Indians.

Hicks drove a 3-2 pitch from Kluber (12-5) to deep center field, and Gregorius scored easily when the ball one-hopped the wall.

Brett Gardner homered twice and Gregorius also connected for the Yankees, playing at Progressive Field for the first time since last October, when they overcame a 2-0 deficit and won the AL Division Series.

Nick Martini had three hits and two RBIs for the Athletics, who improved to 19-5 in their last 24 games. They took three of four from the AL West-leading Astros.

Yusmeiro Petit (3-2) allowed one hit in 2 1/3 scoreless innings, and Lou Trivino worked the ninth for his fourth save.

Trevor Story homered for the Rockies, and Kyle Freeland pitched six-hit ball into the sixth inning. Scott Oberg (3-0) got two outs for the win.

Scherzer (12-5) didn’t dominate over his seven innings, but managed to tie Philadelphia’s Aaron Nola for the NL lead in wins. He struck out five, boosting his league-leading total to 182. Ryan Madson closed for his fourth save.

Taillon (6-7) surrendered one run on four hits with two walks. The right-hander struck out the side twice, once in the third inning and again in the fifth.

Making the most of a one-day stay in Baltimore, the Phillies got 12 hits off Kevin Gausman (4-7) while building a 5-0 lead.

against the team with the worst record in the majors. Alfaro, the No. 9 hitter, singled and scored in the third inning to help Philadelphia move a half-game ahead of second-place Atlanta in the NL East.

Pivetta (6-7) had a no-hitter through four innings and finished with seven strikeouts. The righty gave up three runs and five hits before being pulled with two outs in the seventh.

Seranthony Rodriguez worked the ninth for his ninth save.