Baby Braves looking to shake out of midseason swoon 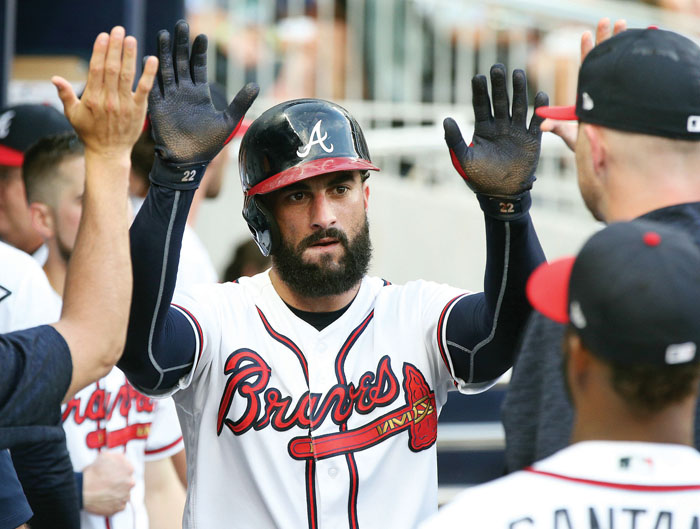 Atlanta Braves' Nick Markakis is congratulated after scoring against the Toronto Blue Jays during the second inning of a baseball game Wednesday, July 11, 2018, in Atlanta. (Curtis Compton/Atlanta Journal-Constitution via AP)

ATLANTA (AP) — As well as things have gone for the Atlanta Braves in the season’s first half, lately there are troubling signs that something is not right.

Or maybe a lot of things are not right.

The Braves have lost six of eight games and this week briefly fell out of the NL East lead for the first time since May 30. They moved back into a first-place tie with Philadelphia with Wednesday night’s win over Toronto. Atlanta was off Thursday before Friday night’s opener of a home series against the Arizona Diamondbacks.

The Braves are looking to regain their momentum entering next week’s All-Star break.

“We’ve just have to get back to getting the whole thing going,” Braves manager Brian Snitker said Wednesday. “We’re obviously struggling in a lot of different areas.”

Snitker was far from panicked. He believes the downturn can be easily explained as a part of the normal flow of a season and said, “I just think teams are going to do that.”

Even so, Snitker said he has examined all options, including tweaks to his lineup. General manager Alex Anthopoulos also has to look closely at the team’s recent downward trends as he considers possible trade options.

The Braves have interest in Baltimore’s Manny Machado but are seen as a long shot to acquire the All-Star shortstop. Anthopoulos has said the team is unlikely to give up top prospects for a short-term rental, and Machado is approaching free agency.

Anthopoulos may be more willing to trade a pitching prospect now that starters Sean Newcomb, Mike Foltynewicz and Mike Soroka have enjoyed success in Atlanta this season.

Trading a prospect for immediate help wouldn’t have been considered a likely move for Anthopoulos at the beginning of the year. The rebuilding Braves were expected to contend in a year or two. But now that the Braves have spent much of the season in first place, the timetable for aggressive moves may have changed.

Left-hander Luiz Gohara, who had been in the bullpen, was optioned to Triple-A Gwinnett after Wednesday night’s game. He is expected to use his time in Gwinnett to prepare for a possible spot in Atlanta’s rotation after the break.

The team earned the nickname “Baby Braves” thanks to key players including 21-year-old All-Star Ozzie Albies and 20-year-old left fielder Ronald Acuna Jr. When Soroka, another 20-year-old, was in the rotation, the Braves had the three youngest players in the majors. Gohara, 21, could add even more youth.

Two more important players are only 24 — Newcomb and shortstop Dansby Swanson. Foltynewicz is a first-time All-Star at 26.

With so much youth, growing pains were inevitable. Newcomb and Foltynewicz have each allowed five earned runs in two straight starts.

Hard-throwing left-handed reliever A.J. Minter has four saves but gave up four runs, three earned, while recording only one out in Tuesday night’s 6-2 loss to Toronto.

Meanwhile, leadoff hitter Ender Inciarte is hitting only .246, and Snitker pulled him from Sunday’s loss in Milwaukee for a lack of hustle. Inciarte was back in the lineup for the two-game series with Toronto.

Nick Markakis, selected to his first All-Star team at 34, Freddie Freeman and Albies have helped keep the team in first place.

Albies became only the sixth player in franchise history to hit homers from both sides of the plate in the same game on Wednesday night. He already has 20 homers, the most for a Braves player before the All-Star break since Andruw Jones hit 20 in 2006.

Snitker hopes Albies can be a model for teammates who are struggling after strong starts.