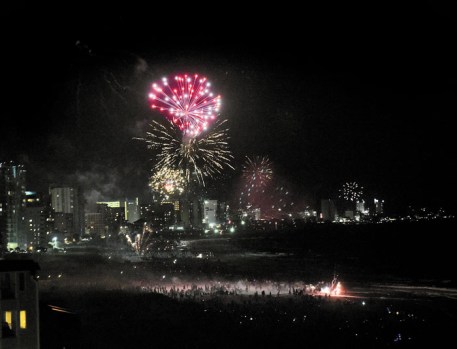 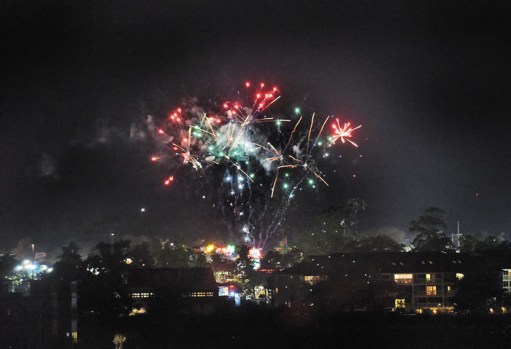 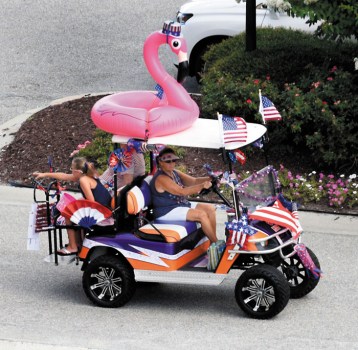 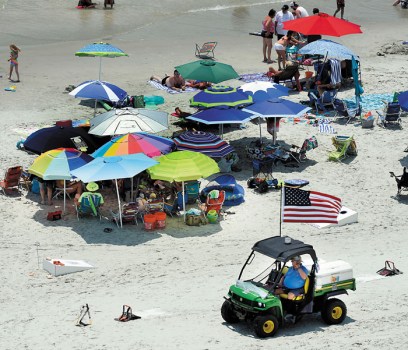 When tents aren't allowed, beachgoers put their umbrellas together to form a tent. Wayne HInshaw/For the Salisbury Post 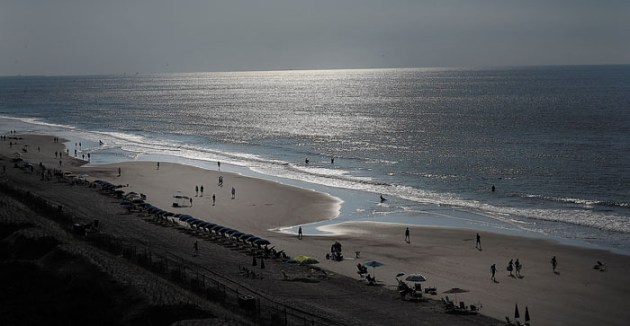 Sitting on the balcony of a condominium seven floors above the Atlantic Ocean at North Myrtle Beach (alias Windy Hill), feeling the ocean breeze, smelling the salty air, and hearing the roar of the breaking waves, I decided to scribble some notes while watching the people below.

All the friendly people below, the tall, short, skinny, fat, young and old, had one thing in common: They were all boiling under the 90-plus degree sunshine. Many looked like they had “cooked” too long and burned in a pressure cooker.

Would a little “sauce” (lotion) cool their bodies and stop the boiling pain? Maybe they would take their sunburned bodies home to enjoy a second week of vacation.

I am writing mostly one liners of what entertains me.

A young boy, maybe 7 or 8, uses his blue beach towel as a cape like Superman while jumping from the walkway steps. He learns he can’t fly.

Kids run with their boogie boards into the ocean.

In the 93-degree weather, a female jogger runs her course headed south.

A woman carrying a big red cloth bag stops to spray sunscreen on her “not so tan” legs. She has a green beach folding chair strapped to her back, increasing the level of difficulty of hitting her legs with spray sunscreen.

There is an elderly bald man walking straight out to sea. He is so far out maybe he is headed for Germany.

High school boys are tossing a football. Practice is only weeks away now.

There are many abandoned sand buckets in red and yellow waiting for someone to need them for the construction of a sandcastle.

A family of five heads over the hot sand for the beach. The father, struggling with his balance in the sand, is pulling a four-wheeler wagon piled high with chairs, a cooler and an umbrella. Mom wears a long black beach cover dress. The kids carry their own plastic shovels and pails.

Simple, real-life dramas are being acted out below. Children crying, families fussing, and some just taking naps under their umbrellas.

Heavy white thunder clouds are gathering in the sky to the north over Cherry Grove.

A fast, noisy, roaring Jet Ski pulls a bright yellow banana boat loaded with riders up and down the coast about a hundred yards out to sea. The skier makes a u-turn, leaving a curved white streak in the blue ocean, but only for a short moment.

Another big man carrying a cooler, maybe loaded with his favorite drinks, already has a much sunburned bare back, yet crosses the sand dunes to get more sun. A dermatologist might be needed next week.

Down the beach toward Cherry Grove, a lone gray-haired man flies the Stars and Stripes flag high over his umbrella. The wind holds the flag straight out at attention.

Tents are not allowed on the beach so some sun worshippers have devised a plan of putting four umbrellas together making a four-post tent.

Watching folks use a water hose to wash the sand off their feet when returning from the beach is pretty exciting on a slow day. Most hose their feet off. Some hose their heads, and some hose off all over. Some must have collected sand inside their swimsuits since they seem be hosing sensitive areas inside their suits. It looks like a decontamination line after a chemical spill.

There is a clever man with his collapsed umbrella and flag mounted on a wagon loaded with chairs. When he reaches his spot on the beach, almost in one motion, he pops up his umbrella and national flag and sits in his chair.

A bikinied woman pushes a two-wheeled cart with a pink and white umbrella down the beach selling Italian shaved ice.

Three elderly men show their patriotism by marching one in front of the other down the beach. One carries the Stars and Stripes. One carries the South Carolina flag and the third presented the black POW flag. The sun worshippers stop their sunning long enough to stand and cheer the men and flags.