Other voices: Rein in power to set tariffs 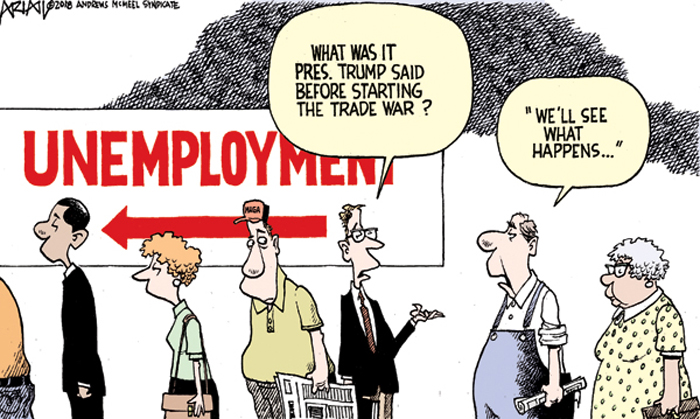 There’s been a lot of ink spilled over the past few months about trade wars. The president says they are easy to win, while others talk about how messy and expensive they can be countries, for alliances and for consumers.

We have a different thought. Trade wars can often start with something far short of a bang, in that the sky doesn’t collapse the first day that tariffs kick in. Instead, over time, expensive import duties can slowly choke off an industry’s or even an economy’s resilience.

If that seems like a trivial thought, consider several facts relevant to the trade debate now underway in this country. Let’s start with the small detail that Donald Trump justifies his tariffs — including those that kicked in late last week on $34 billion in Chinese goods — on national security grounds.

The president makes that claim for the simple reason the law requires it. That is to say, if he wants to unilaterally impose tariffs, he can do so by finding that the goods in question impair the country’s security interests. Under the Trade Expansion Act of 1962, the Commerce secretary has the authority to investigate and determine whether certain imports undermine national security.

One reason the president (through the Commerce secretary) was handed such discretion was that typically since the end of World War II, American presidents have looked for ways to expand the nation’s prosperity by capitalizing on the expansion of global trade. Congress often gets caught up in parochial politics, but the president usually has a more national outlook.

The upshot of this approach over the past several decades is that America has prospered. We’d argue that our prosperity is actually one of the best bulwarks of our national security. After all, one of the reasons why the United States can fund its military at a level in far excess of every other country is that the American economy has consistently led the world.

So it is of broad concern that we now see a trade war gathering steam. It is also of specific concern. The Brookings Institution estimates there are approximately 156,000 jobs in Texas alone that would be imperiled by Trump’s tariffs — something that should be evident to all North Texans after Toyota noted that the tariffs could add $1,800 to a price of a Camry.

What’s more, about 20 percent of the jobs in our economy are now tied to trade, up from about 10 percent in the early 1990s. So trade is not only important, it grows more crucial to our economy with each passing year.

Given that reality, as we dip into trade fights with a growing list of other countries, it is high time that Congress pushes forward new legislation to amend the president’s ability to impose tariffs at will. Tariffs are taxes by another name. And taxes shouldn’t be levied at the whim of one branch of government.