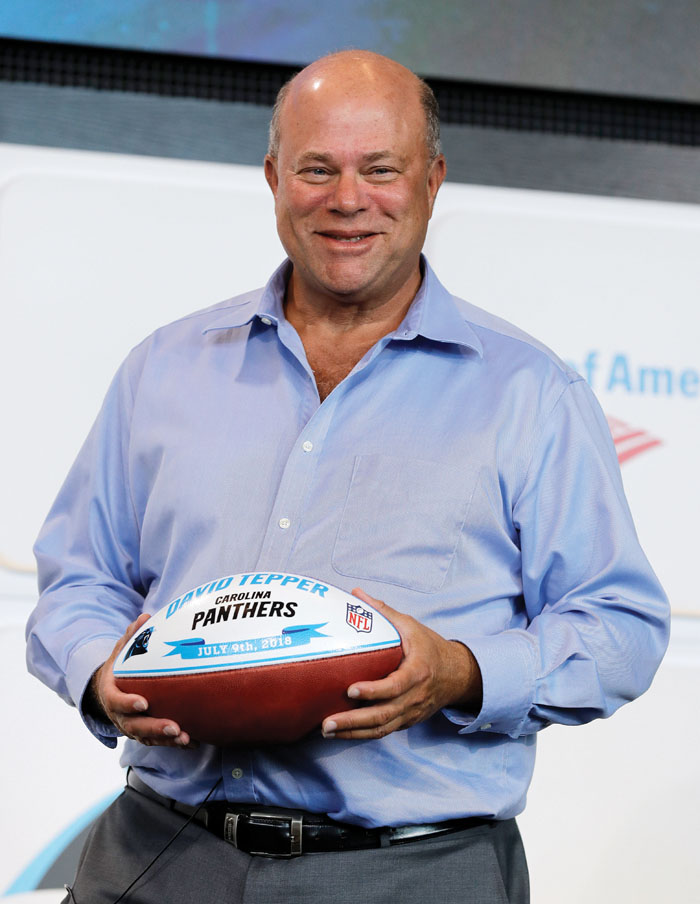 New Carolina Panthers owner David Tepper poses for a photo during a news conference at Bank of America Stadium in Charlotte, N.C., Tuesday, July 10, 2018. Tepper finalized his purchase of the team on Monday. (AP Photo/Chuck Burton)

CHARLOTTE (AP) — While new Carolina Panthers owner David Tepper would like the focus to be on his plans for the team’s future, he cannot completely put the franchise’s sullied past behind him.

Tepper has to keep the prominent statue of Panthers’ founder Jerry Richardson outside of the stadium as part of the NFL-record $2.2 billion deal he agreed to in June  after Richardson decided to sell the team in December amid reports of sexual and racial misconduct in the workplace.

Tepper said Tuesday when he was introduced as the team’s new owner that he’s “contractually obligated” to keep the 13-foot high statue of Richardson standing alongside two growling panthers where it is.

The league substantiated the allegations against Richardson following a six-month investigation and fined him $2.75 million.

Fans have expressed their desire on social media and sports talk shows to remove the statue, which was built in 2016.

And while Tepper said contractually he can’t do that, he spoke repeatedly about changing the environment of the Panthers workplace.

Tepper said there will be “no impediment” in employees feeling comfortable coming forward if they if they have any problems on the business side of the organization.

He wants to create an environment where “everybody feels safe like a family.”

Sports Illustrated reported in December, citing unnamed sources, that Richardson made sexually suggestive comments to women and on at least one occasion directed a racial slur at an African-American Panthers scout. The report states that he reached settlements that included non-disclosure requirements forbidding the parties from discussing the details.

“Listen, whatever was, was. This is now,” Tepper said. “This is going to be an open place. So there are not going to be non-disclosure agreements, no matter what, in this new place. That was then, this is now.”

The Panthers are only tied to Charlotte through June 2019 in terms of a stadium agreement, but Tepper reiterated the city is “the most logical place” to keep the team, although adding that a “redo” is necessary.

The Panthers and the city of Charlotte came to an agreement on improvements for the team’s stadium in 2013, calling for the city to contribute about $87 million for renovations to Bank of America Stadium in exchange for a six-year hard tether to keep the NFL franchise in Charlotte.

He said the Panthers are “falling behind a little bit” other teams in the league.

He is considering moving the team’s practice facilities to South Carolina, in part to keep both states interested in the team. The Panthers currently practice on three fields within walking distance to their downtown stadium.

Tepper said that valuable land could be used for developmental purposes.

Tepper, who grew up playing football, also said he wants more events at the team’s stadium, including high school state championship football games and the “right kind of concerts.”

He is excited about the football side of the team, praising two-time AP Coach of the Year Ron Rivera and his hiring of new offensive coordinator Norv Turner to replace Mike Shula.

“I’m not looking to do too much there,” Tepper said of the coaching side.

However, Tepper plans to hire a new team president to replace Danny Morrison, who left last year, and former COO Tina Becker, who resigned on Monday after seven months in the position. He said he has two replacement candidates in mind, both with some marketing background.

He also likes the makeup of the team’s roster with training camp right around the corner, citing how involved players are in the community and charity work.