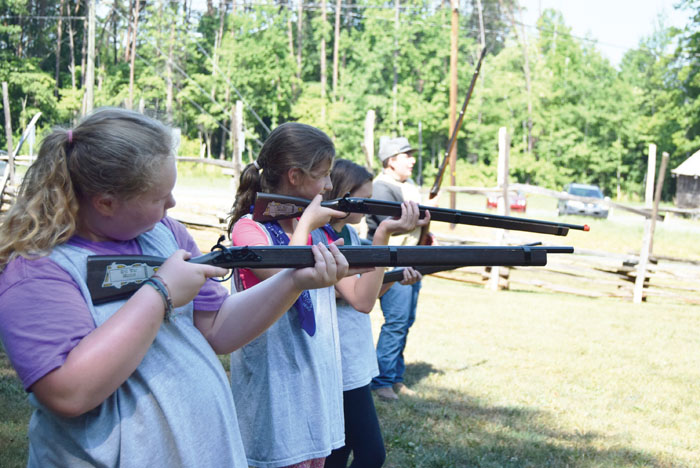 Students take aim during a skirmish at Civil War Camp. The group spends the week learning about life during the Civil War and its effects on the area. Rebecca Rider/Salisbury Post

GRANITE QUARRY — To the rest of the world, it’s 2018. But on the grounds of the Old Stone House in Granite Quarry, the clock was turned back to 1863, the height of the Civil War.

For the seventh year, the Rowan Museum held a Civil War camp for area middle school students. Museum Executive Director Aaron Kepley said students spent the week learning about life during the war and the history behind the conflict.

They learn how to drill with a rifle, participate in skirmishes in the woods, eat food cooked over an open fire and visit Salisbury’s National Cemetery.

This year, 12 students signed up for the camp. Kepley said the week had new offerings, such as an escape room and an increased focus on math and critical thinking. But by Wednesday, the teens were beginning to get antsy and “buck off authority.” It’s a fact that made Kepley laugh.

“They don’t quite realize that that’s actually pretty historically accurate,” he said.

By 1863, both armies were growing tired of the war, and soldiers became unruly and began deserting in droves.

But students still cited a positive experience. Campers said they enjoyed the chance to be outside and liked the variety the camp offered — as well as the illusion of a leap back in time.

“It’s not like any other camp I’ve been to before,” said Eva Lamanno.

This year is the final year for volunteer Simon Connely, one of the camp’s founders

“So we’ll be losing the guy who helped us start it,” Kepley said.

Connely was just a teenager himself when he heard Rowan Museum was starting a Civil War camp. In love with the era, he volunteered to help run it. He’s been involved ever since.

“It’s really enjoyable to teach (the kids),” he said. “You kind of live it with them.”

Connely is a second lieutenant and has been commissioned by the Army. Next summer, he’ll be deployed overseas.

In between all the fun activities, time spent together and taste testing, Connely, Kepley and others hope that students learn what it was really like for North Carolinians during the Civil War — the good and the bad.

“We don’t mince that slavery had a huge part in the start of the Civil War,” Kepley said. “Otherwise, this camp is perpetuating falsehoods, and we don’t want that. We want it to be real. The Civil War was hell, and we want them to know that.”