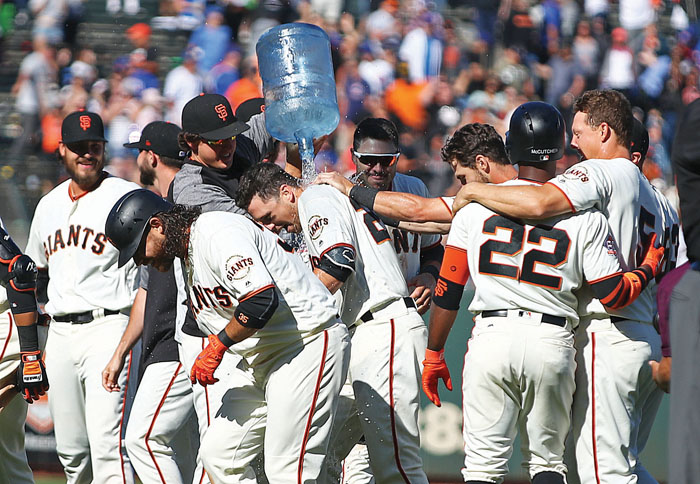 San Francisco Giants' Buster Posey has water poured on him as he celebrates after driving in the winning run against the Chicago Cubs in the 13th inning of a baseball game Wednesday, July 11, 2018, in San Francisco. (AP Photo/Ben Margot)

CLEVELAND (AP) — Jose Ramirez homered twice and drove in five runs as Cleveland took out some frustrations following a brutal loss with a 19-4 thumping of Cincinnati.

Ramirez hit a two-run homer in the first inning off Tyler Mahle (7-7) and connected for a three-run shot in Cleveland’s nine-run third. With the Indians up 17-0, the All-Star was replaced in the fifth inning by manager Terry Francona before he could inflict further damage.

It was a much-needed rebound by the AL Central leaders, who squandered a 4-0 lead in the ninth on Tuesday night, when Francona’s miscommunication with pitching coach Carl Willis on a choice of relievers helped the Reds rally for seven runs and stun the Indians.

Carlos Carrasco (10-5) reached 1,000 career strikeouts, and given the humongous lead, coasted through five innings for his second straight win since coming off the disabled list. Adam Plutko worked four innings for his first career save.

PITTSBURGH (AP) — Starling Marte hit a two-run home run and Trevor Williams combined with four relievers on a five-hitter as the Pittsburgh Pirates beat the Washington Nationals 2-0 on Wednesday.

Williams (7-7) won for just the second time in his past 10 starts, giving up four hits with three strikeouts and three walks.

Gio Gonzalez (6-6) remained winless since May 28 despite allowing just two runs, six hits and one walk while striking out four.

Richard Rodriguez, Edgar Santana, Kyle Crick and Felipe Vazquez followed Williams with one scoreless inning each. Vazquez earned his 20th save in 24 opportunities.

Colorado scored seven runs off Jorge De La Rosa and four more off Yoshihisa Hirano to bring on Descalso in the fourth. He had retired the first nine batters he faced his career but Nolan Arenado greeted him with an RBI single and Gonzalez followed with a two-run homer. Descalso was the first position player in franchise history to pitch more than one inning. Avila became the second.

MINNEAPOLIS (AP) — Brian Dozier hit a two-run home run, going deep for the second straight game to give Minnesota a boost on its way to a win over Kansas City.

Lance Lynn (7-7) recovered from a three-run homer by Salvador Perez in the first inning to win his second straight start for the Twins, who used the bottom third of their lineup to launch rallies in the second and the fourth against Royals starter Burch Smith (0-1).

Mike Moustakas homered twice for the Royals, who have the fewest home runs in MLB, but took the Twins deep five times over the last two games of this series. Kansas City has lost 23 of its past 27 games.

The Tigers, who struck out 14 times against five Tampa Bay pitchers, have lost four straight and 18 of 22.

Rookie left-hander Ryan Yarbrough (8-4) got the win after giving up one hit in three innings of relief. Sergio Romo pitched the ninth for his 11th save in 16 opportunities.

Brandon Belt drew a two-out walk from James Norwood (0-1). Andrew McCutchen then singled to bring up Posey, who ended the 4-hour, 30-minute game with San Francisco’s first run since scoring four in the first.

Cubs slugger Kris Bryant hit a two-run homer in his return from the disabled list, and All-Star Javier Baez tied the game with a solo homer to start the seventh.

BOSTON (AP) — Chris Sale struck out 12 in seven innings of shutout ball in his final start before the All-Star Game, and major league batting leader Mookie Betts had two more hits to lead Boston to its ninth straight victory over Texas.

Sale (10-4) allowed six hits and walked one to win his fifth straight decision and move the Red Sox 36 games above .500 for the first time since Bucky Dent homered into the net above the Green Monster in a one-game playoff to settle the 1978 AL East title.

Elvis Andrus had three hits for the Rangers, who struck out 18 times to lose for the fifth time in six games. Bartolo Colon (5-7) allowed four runs.

Craig Kimbrel struck out the side in the ninth for his 28th save, and his 19th in a row.

BALTIMORE (AP) — Greg Bird hit his first career grand slam to back a dominating pitching performance by Sonny Gray, and New York beat the Baltimore for a split of the four-game series.

Facing Dylan Bundy (6-9) in the third inning, Bird launched a drive off the right-field foul pole to put New York up 5-0. It was the second night in a row he homered and had four RBIs.

Gray (6-7) allowed three hits, walked one and struck out eight over six innings.

NEW YORK (AP) — Pinch-hitter Brandon Nimmo launched a three-run homer in the bottom of the 10th inning and New York got another dominant outing from All-Star Jacob deGrom in a 3-0 victory over Philadelphia Phillies.

Amed Rosario, who had two of New York’s four hits, began the winning rally with a two-out double off Mark Leiter Jr. (0-1) — the first hit for the Mets since the fourth inning. Jose Reyes walked and Nimmo drove Leiter’s next pitch well over the wall in right-center for his first career walk-off RBIs.

In his final scheduled start before heading to the All-Star Game next Tuesday in Washington, deGrom scattered five hits and matched his longest outing of the season. He struck out seven and lowered his major league-leading ERA to 1.68.

Robert Gsellman (6-2) pitched a scoreless inning for the win.

Rodon (2-3) allowed only two singles and a double while walking two and striking out a season-high seven though 7 1/3 innings. The 25-year-old left-hander, who spent the first two months of 2018 on the disabled list rehabbing from shoulder surgery, sparkled in just his seventh start this season.

Joakim Soria got the final four outs for his 13th save in 16 chances.

ATLANTA (AP) — Ozzie Albies snapped Atlanta’s power drought with two homers, and the Braves beat Toronto to move back into a tie for the NL East lead.

Mike Foltynewicz (7-5) and the Braves led 7-0 before Toronto scored five runs in the seventh on Justin Smoak’s leadoff homer and a grand slam by Devon Travis. But Albies hit a two-run shot in the eighth to help Atlanta hold on for just its second win in eight games.

Coupled with Philadelphia’s loss to the New York Mets, the Braves moved into a tie with the Phillies for the division lead.

Davis, who extended his career-best hitting streak to 13 games, put the A’s up 2-0 with a double in a three-run first. Pinder made it 6-0 when he connected off McCullers (10-4) for his ninth homer in the fourth.

MIAMI (AP) — Milwaukee slugger Jesus Aguilar was added to the NL All-Star team Wednesday night and then validated the selection with three hits and three RBIs, but the Brewers went 3 for 16 with runners in scoring position and lost 5-4 to the Miami Marlins in 12 innings.

Starlin Castro singled home the winning run with one out in the 12th.

Aguilar learned he won the online vote for the final NL roster spot, and he’ll also compete in the Home Run Derby next week in Washington. He doubled home a run in the first, singled in the fourth and hit a tying, two-run double in the eighth against Drew Steckenrider.

Aguilar came into the game leading the NL in homers, slugging and OPS. He has 67 RBIs and is batting .307.

Miami’s Garrett Cooper led off the 12th with a single against Jorge Lopez (0-1) and went to second on a groundout. Castro then grounded a single to left field and Christian Yelich’s throw home was off line, allowing Cooper to score standing up.

Miami took two of three in the series from the NL Central leaders.

The Marlins, who have the NL’s worst record, hit a new attendance low. The crowd of 5,265 was the smallest in the seven-season history of Marlins Park, and a few hundred fans remained at the finish.