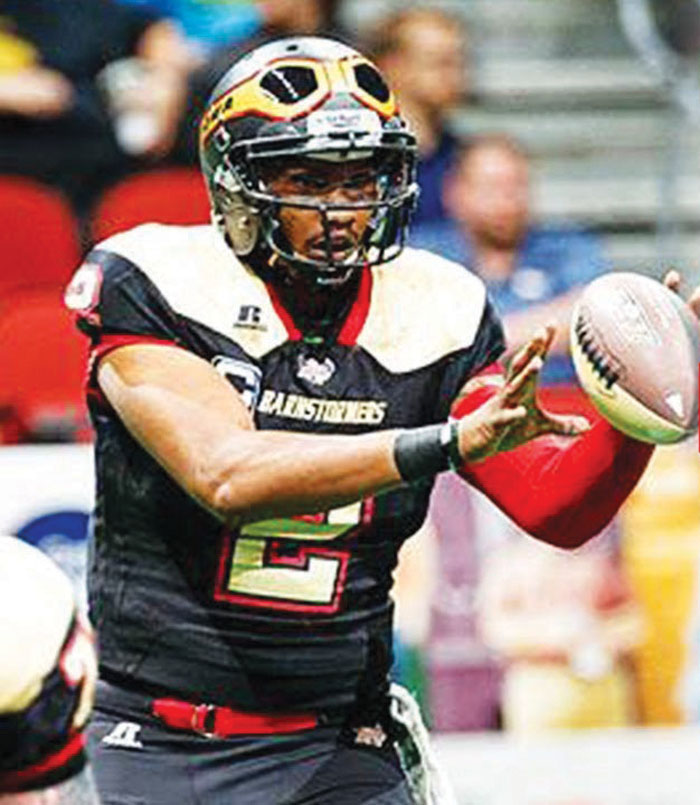 YouTube photo ... Iowa Barnstormers quarterback Drew Powell catches a snap from the center during a game this season in the Indoor Football League. Powell, a former Livingstone QB, led his team to its first-ever United Bowl championship on Saturday night in Des Moines.

DES MOINES, Iowa — During his four years as quarterback at Livingstone, Drew Powell lit up the record book, was team MVP and earned plenty of All-CIAA honors.

But wins were hard to come by and the only real shot at the CIAA championship game ended with a loss to Winston-Salem State at Alumni Memorial Stadium in his next-to-last game in 2015.

Powell, a 6-3, 220-pound lefty from Upper Marlboro, Md., is now getting fitted for a ring after leading the Iowa Barnstormers to the Indoor Football League’s United Bowl championship last Saturday night.

The Barnstormers defeated the Sioux Falls Storm, 42-38, for the team’s first title in its 23-year history. At the team’s celebration at the Wells Fargo Arena on Tuesday evening, Powell told the crowd just how he felt.

“I’ve had a lot of personal awards during my life, but I’ve never had a feeling of hoisting a trophy or putting a ring on my finger,” Powell said. “I just want to say thank you to my teammates for this.”

Powell, the league MVP after leading Iowa to a 12-3 record and home-field advantage throughout the playoffs, had his typical game in the United Bowl, completing 12 of 16 passes for 178 yards and four TDs. He also ran for 48 yards and a score.

And, most importantly, Powell led the Barnstormers on a five-play, 37-yard, game-winning drive in the final minutes. When running back Jamal Tyler scored from eight yards out, only 13 seconds remained in the game.

“I know the fans and everybody watching were biting their nails, but we felt confident the whole time,” Powell said, of the last drive. “We knew what we could do and felt confident that we had the right plays called and that we were going to execute, so it was like a normal drive, in any other game. For sure, we’ve had plenty of drives just like that one.”

The Barnstormers had never won the title, not even in the 1990s when the quarterback was Kurt Warner — who then went on to an NFL Hall of Fame career and Super Bowl championship with the St. Louis Rams in 1999. Powell deflects any comparisons, though there have been some.

“Winning the championship was big and Drew was a big part of that,” said Iowa coach Dixie Wooten. “Any time you mention Drew’s name with Kurt Warner, it’s an unbelievable situation for him as a man. We appreciate that Kurt Warner played here and we’re just proud to bring home a championship for all Barnstormer teams.”

No one is predicting a repeat of Warner’s career for Powell, but his MVP season could open some doors. In 12 regular season games, Powell completed 68 percent (154 of 226) of his passes for 1,604 yards and 34 touchdowns (only 4 interceptions). If the yardage sounds low, keep in mind that the field is just 50 yards. He also rushed for 939 yards and 23 more TDs.

He missed an Iowa game this season in order to attend a Canadian Football League minicamp and worked out for the Saskatchewan Roughriders. Although the Roughriders passed on his services, Powell returned to finish the IFL season with a bang.

“I received some from good feedback after the game Saturday night,” said Powell. “A lot of important people were here and I heard a lot of good things, so we’ll see. In this business, you might have a plan and the next day, something else pops up. You never know when your phone will ring, so it’s best to not get too excited about anything … but I do think I’ll have a couple of opportunities coming up. A couple of the CFL teams are now saying that they’re going to take another look at me and that’s a realistic statement. I’ve also gotten some positive feedback from some NFL scouts as well.”

And a new outdoor league is on the horizon — the Alliance of American Football (AAF) will begin play next spring. The eight-team league will have tryouts coming up in August at various sites, including Houston and Atlanta. Some big names have already signed on as head coaches, such as Steve Spurrier (Orlando), Brad Childress (Atlanta), Mike Martz (San Diego) and Mike Singletary (Memphis). Others franchises are in Salt Lake City, San Antonio, Birmingham and Phoenix. The league already has a TV partner — CBS Sports.

“If I don’t have something solid by then, I’ll probably look into that league as well,” said Powell. “Michael Vick is the offensive coordinator with the Atlanta team and that would be awesome to work with him.”

Powell’s parents, Edward and Lynne Powell, flew in from Maryland for the United Bowl, along with sisters, cousins and an aunt. The quarterback will head back to Maryland for most of the summer but will be in Charlotte as well, where he has a 2-year old son, “Little Drew.”

Powell has also had time to reflect on his time at Livingstone and his growth there under football coach Darryl Williams.

“Livingstone did a lot for me,” he said. “Honestly, they raised me there. I was 17 years old when I started at Livingstone, so I was still fresh, just a kid. That’s where I became Drew Powell. I started realizing that hard work pays off, with Coach Williams showing me the way, with the dedication that it takes, everything that it takes to be a champion. Unfortunately, we never got to that point at LC, but we were headed there. We never got to the championship game, but I learned a lot along the way and that definitely molded my career and the man that I’ve become today.”

“I expected him to do well,” said Williams. “He is a good, smart football player and hopefully, he’ll get a chance to further his career with even more opportunities — sometimes, it’s all about the timing. But he’s done well and we’re very, very proud of him. I’m not surprised that he’s gone on to be this type of professional.”

The IFL has eight offensive players on the 50-yard field — a quarterback, running back, three linemen and three receivers. The biggest adjustment from college football, according to Powell, was the wall around the field which comes very fast on the out-of-bounds lines.

“The wall … it’s horrible,” laughed Powell. “You get hit into that, let’s just say it’s not the best. Other than that, I’d say the speed and quickness of the game, with guys in motion. As the QB, you’ve got to get rid of the ball a lot faster. If you wait a split-second too long, a receiver is not open anymore. The timing is just quicker than college football.”

Powell got a taste of the IFL in 2017, playing briefly for Sioux Falls at wide receiver before returning to quarterback for the Nebraska Danger. He joined the Barnstormers in the offseason, no doubt at the urging of Iowa defensive line coach Malcom Nelson, a former Livingstone assistant coach.

“When I signed with Iowa, my goals were to win the championship and possibly something individually,” added Powell. “The best thing about winning the MVP award just meant that I had a lot of good coaches and players around me. All I had to do was come out and do my job and take care of the football.”

If taking care of the football meant getting it into the end zone 57 times, then the former Blue Bear did just that.