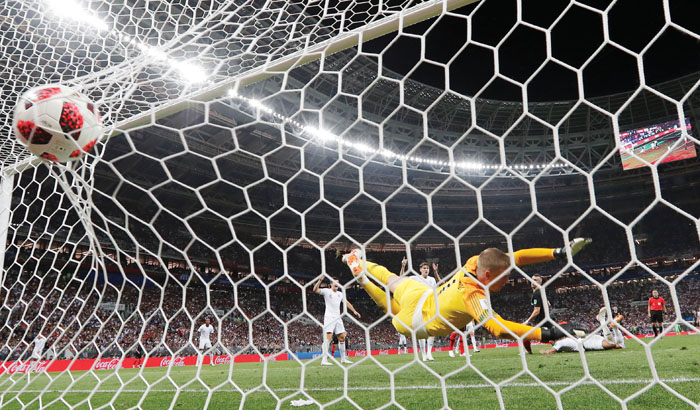 MOSCOW (AP) — Croatia’s legs seemed heavy, burdened by the accumulated toll of consecutive penalty-kicks wins needed to get this far. England had gone ahead with a free kick just five minutes in, dominated play and appeared headed to its first World Cup final since 1966.

Then the second half started and it was as if a different Croatian team had replaced the lethargic one.

Ivan Perisic tied the score in the 68th minute , Mario Mandzukic got the go-ahead goal in the 109th and Croatia shocked England with a 2-1 victory Wednesday that advanced a nation of just over 4 million to a World Cup final against France.

“Mentally strong team,” midfielder Ivan Rakitic said. “It’s just unbelievable to get back in the game in this way.”

When the final whistle blew and they knew they were going to their first World Cup final, the Croatians ran to their jumping and cheering fans in their iconic red-and-white checkered jerseys. Croatia joined an exclusive club of 13 nations that advanced to a World Cup final, doing it in a tournament where powers Brazil, Germany, Argentina and Spain made early exits.

“They’ve had an incredible route to the final. They’ve shown remarkable character,” said England coach Gareth Southgate, who for now will be remembered more for a fashionable waistcoat than ending a half-century of hurt.

France, which won its only title at home in 1998, will have an extra day of rest after beating Belgium 1-0 on Tuesday.

Croatia, coming off 360 intense minutes at soccer’s highest level, faces its biggest sporting moment since becoming an independent nation in 1991.

“We started slowly, but we’ve shown our character, just as we did in the previous two knockout rounds when we were one-goal down,” Perisic said.

Fans back home in Zagreb took to the streets to celebrate, lighting flares and waving flags in a sea of exuberance.

“We are a nation of people who never give in, who are proud and who have character,” said coach Zlatko Dalic, who wore a checkered jersey to his post-match news conference. “There’s no weakness in a team that is in the final.”

England was not among the top 10 nations in ticket sales before the tournament, but the team’s progress caused gallivanting supporters to flock to Moscow.

The front of the stands behind one goal was filled with more than two dozen white banners with a red Cross of St. George, pledging support from many of the island’s clubs, from Bradford to Wolverhampton. Back home, a crowd of 30,000 was in London’s Hyde Park for a large-screen viewing, the British Beer and Pub Association predicted supporters would buy 10 million extra pints at pubs during the match, and No.1 Court at Wimbledon was less than one-third full for the men’s quarterfinal between John Isner and Milos Raonic.

Promise seemed about to be fulfilled when Kieran Trippier curled in a free kick in the fifth minute for his first international goal, above leaping Dejan Lovren and Mandzukic and past the desperate dive of goalkeeper Danijel Subasic. Choruses of “God Save the Queen” began in England’s end.

“We had a couple chances after that to get the second, give ourselves a bit more breathing room,” England captain Harry Kane said.

Football will not be coming home to England, and there will be no title to match the 1966 triumph at Wembley Stadium. Kane & Co. will deal with the same disappointment that felled Shearer and Platt, Gazza and Wazza, Beckham and Gerrard. And Southgate, whose penalty-kick failure led to England’s previous semifinal loss in a major tournament, in the 1996 European Championship semifinals.

“Impossible to say anything to them that is going to make them feel better at this point,” Southgate said after England’s fourth straight loss in a major tournament semifinal.

Croatia tied the score after Rakitic switched the ball from left flank to right, where Vrsaljko crossed. Kyle Walker attempted a diving header to clear. Perisic jumped and from behind raised his left boot over Walker’s head to poke the ball past goalkeeper Jordan Pickford from about 8 yards for his fourth World Cup goal, including two in this tournament.

Mandzukic scored after Walker stuck out a leg to block Josip Pivaric’s cross. The ball popped up, and Perisic outjumped Trippier to head the ball toward goal. Mandzukic alertly reacted to the unexpected ball in the penalty area, splitting defenders Stones and Harry Maguire, who both had taken four short steps up. The ball bounced twice, Mandzukic ran onto it and one-timed a low, left-footed shot to Pickford’s left.

Mandzukic ran to a corner and was mobbed by teammates, who jumped on him and trapped photographers under them in the crush.

Not long after, Dalic was thinking about the short recovery time before the final.

“We still have lots of energy in the tank,” he said.

Croatia defender Domagoj Vida was jeered by fans whenever he touched the ball. He received a warning from FIFA for shouting “glory to Ukraine” in a video posted after Croatia beat Russia in the quarterfinals.

MOSCOW (AP) — Sexism has been a bigger problem than racism at the World Cup in Russia, according to anti-discrimination experts advising FIFA.

Fans harassing female broadcasters while they worked are among about 30 cases of “sexism on the streets” reported to FIFA by the Fare network.

Analyzing the World Cup’s issues at a briefing Wednesday, the head of FIFA’s diversity program also acknowledged wanting fewer images of attractive women in stadiums to be shown on future broadcasts. Federico Addiechi said FIFA plans to talk with national broadcasters and its own TV production team about the issue.

Racism was predicted to be the main World Cup problem because of longstanding issues in Russian soccer and other European fan bases.

“There haven’t been a great deal of incidents of the type we expected,” Fare director Piara Powar said, praising Russian people who “played a magnificent role making people feel welcome.”

Powar said about half of those reported incidents involved female broadcasters being “accosted while on air.” He estimated up to 10 times more unreported cases where Russian women were targeted.

With World Cup costs for travel and tickets — $105 for the cheapest seats at group games for visitors — always rising, the different audience for games helps explain changing patterns of behavior.

Powar said with Russian authorities also keeping home-grown hooligans away from games, the World Cup had an international crowd “very different to the fans that come to domestic football.”

“If you come to this tournament with prejudices, and don’t like people from a different nationality, then generally you’re in the wrong place,” he said.

Still, FIFA did impose fines during the tournament on soccer federations including Serbia, Russia and Poland for racist, nationalist and offensive banners displayed by fans at games. The fines started at 10,000 Swiss francs ($10,100) for a first incident.

FIFA and Russian organizers worked to identify fans linked to incidents of discrimination in Russia, and the most public violent incident was when Argentina fans attacked Croatia fans inside a stadium.

Addiechi said some of the 1.5 million people issued with fan identification laminates had them stripped, and were deported. About 700,000 of the Fan IDs went to international visitors, he said.

At future tournaments, FIFA hopes hundreds of millions of television viewers worldwide will get a more respectful view of women at games.

Addiechi said FIFA’s stance was “a normal evolution,” and broadcasts in Russia have already improved from the 2014 World Cup in Brazil.

FIFA has already intervened with broadcasters “on a case-by-case basis when some cases arose, and they were pretty evident,” Addiechi said.

Taking lessons from the World Cup in Russia, Powar said he hoped for more coordination between FIFA and its six continental governing bodies to ensure a consistency of monitoring and punishing discrimination cases.

Russia has won praise for its hosting of the World Cup, including embracing some social programs FIFA requires of host nations.

Addiechi acknowledged FIFA could have “a limited impact” from next week, and looked to former Russia player Alexei Smertin to continue leading its anti-discrimination work.

“We definitely expect and count on the support of Alexei,” Addiechi said, “and the Russian football union.”