Serena in semifinals: ‘This is really happening’ 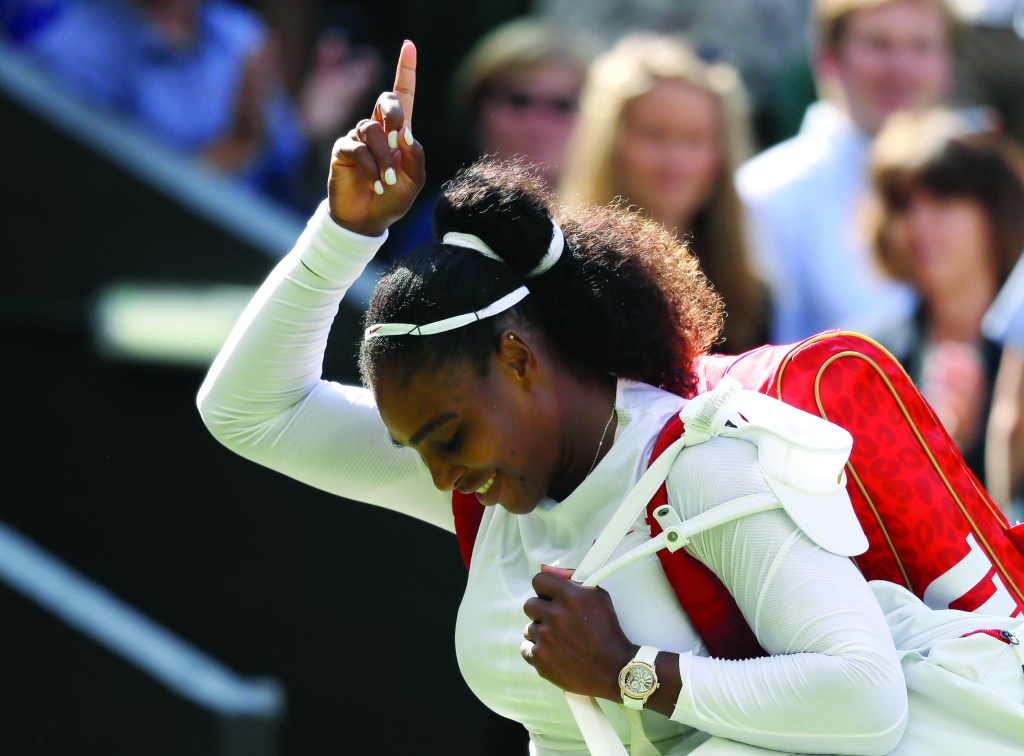 LONDON (AP) — There are moments in which nothing at all seems different about Serena Williams, moments such as when she unleashed a 109 mph service winner to even her Wimbledon quarterfinal at a set apiece, leaned forward and yelled, loudly as can be, “Cooome ooon!”

Or when, about 10 minutes later, she stretched for a lunging backhand winner to break at love and take control of the third set, then raised a fist, figuring a berth in her 11th semifinal at the All England Club was close at hand.

And after Williams came up with a comeback to beat 52nd-ranked Camila Giorgi of Italy 3-6, 6-3, 6-4 on Tuesday, she headed off Centre Court with her right index finger aloft. Yes, no matter what the rankings or seedings say, no matter how long she was away, Williams still looks capable of playing like someone who’s No. 1, just about 10 months after having a baby.

“Everything right now is a little bit of a surprise. To be here. To be in the semifinals. I mean, I always say I plan on it, I would like to be there, have these goals,” Williams said. “But when it actually happens, it still is, like, ‘Wow, this is really happening.’”

So what if she’s still getting her game in gear?

So what if Giorgi wouldn’t seem to miss while moving out to that early lead?

“It’s weird. Sometimes I feel, ‘Man, I’m in trouble.’ Sometimes I feel, ‘I can fight.’ For whatever reason, today I was so calm,” said 36-year-old American, who has been wearing compression leggings as a precaution after a blood-clot scare following her daughter’s birth. “Even when I was down the first set, I thought, ‘Well, she’s playing great. I’m doing a lot of the right things.’”

Next up for Williams as she tries to earn her eighth title at the All England Club and 24th Grand Slam trophy overall will be a match Thursday against No. 13 seed Julia Goerges of Germany, a 3-6, 7-5, 6-1 winner against No. 20 Kiki Bertens.

“It’s pretty unreal for me,” said Goerges, who reached her first major semifinal at a tournament where she exited in the first round each of the past five years.

The other semifinal is No. 11 seed Angelique Kerber of Germany vs. No. 12 Jelena Ostapenko of Latvia.

Kerber is a former No. 1 who owns two Grand Slam titles and was the runner-up to Williams at Wimbledon two years ago. Ostapenko won last year’s French Open.

Kerber needed seven match points to close out No. 14 Daria Kasatkina of Russia 6-3, 7-5 at Centre Court, while Ostapenko defeated 2014 Australian Open runner-up Dominika Cibulkova of Slovakia 7-5, 6-4 at a windy No. 1 Court.

After a series of upsets made this edition of Wimbledon the first since it began seeding players in the 1920s that none of the top 10 women reached the quarterfinals, Nos. 11, 12 and 13 are still around. And so is No. 25, Williams.

The All England Club seeded her there as a nod to all of her past success at the grass-court major, including titles the last two times she entered, in 2015 and 2016. She missed Wimbledon a year ago because she was pregnant, going about 16 months between Grand Slam tournaments, so her ranking is just outside the top 180.

That is going to change now.

Told she is guaranteed of rising to 51st next week — and higher if she reaches the final or wins the championship — Williams joked: “Got to keep trekking on, though. Serena Williams, 51? Eh, it doesn’t have that same ring to it. The ‘1’ part does, but not the ‘5.’”

Williams is 3-0 against Goerges, winning in straight sets each time.

“Every match starts from zero,” Goerges said. “Everybody has the same chances to win that match, and I’m looking forward to it.”

After their most recent meeting, in the French Open’s third round last month, Williams pulled out of that tournament, citing a chest muscle injury that made it too painful to serve.

She went a couple of weeks without practicing serves, and the rest did wonders. She hit one at 122 mph against Giorgi, delivered six of her seven aces in the final set, and won 44 of the last 54 points she served.

“I messed up too much on my returns,” said Giorgi, questioning her decision to stand inside the baseline to receive serve.

Rare is the player who can produce Williams’ sort of pace on serves — Giorgi’s average speeds were actually faster on first and second serves, and she delivered the match’s first three aces — and mirror her power in groundstroke exchanges at the baseline.

But Giorgi plays with nary a trace of subtlety and more than a bit of abandon, taking risky, flat chops at the ball with serves, returns, forehands and backhands. She harbors no compunction about striving for a point-ending winner with every stroke. When she’s calibrating properly, it all can be tough for opponents to handle.

Well, for a set, anyway.