Reds win with 7 runs in the 9th; Braves fall to Toronto 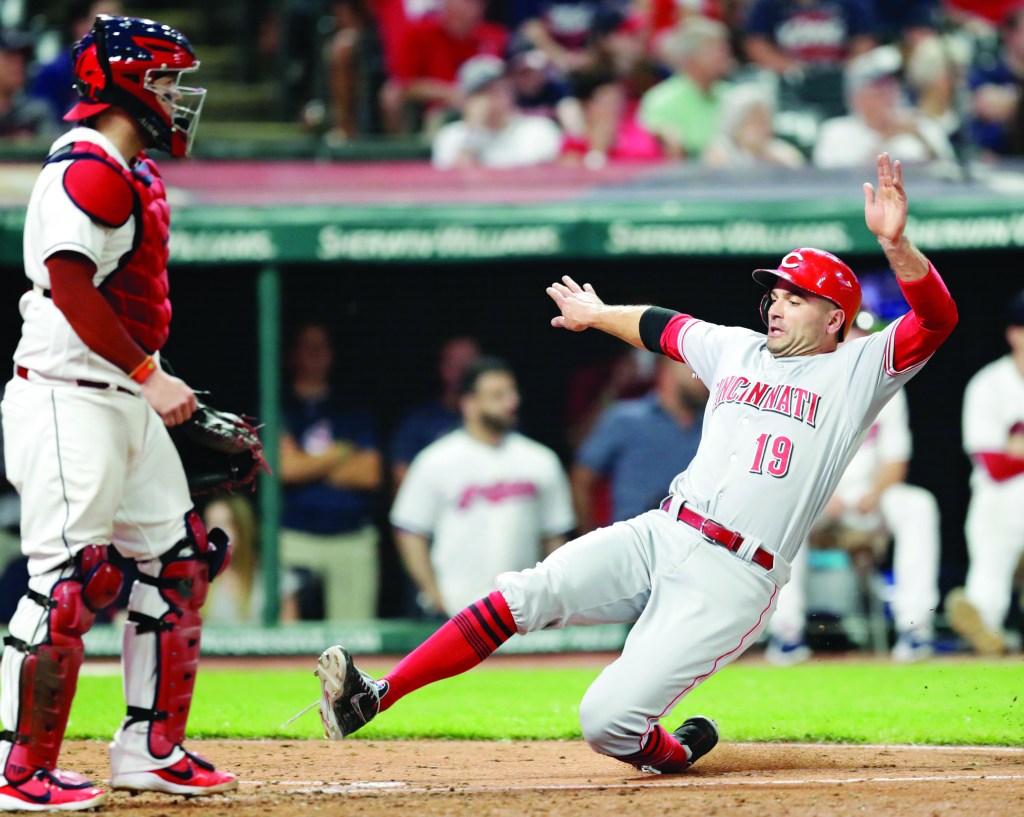 CLEVELAND (AP) — Joey Votto hit a go-ahead three-run double during a seven-run ninth inning and the Cleveland Indians bullpen wasted a gem from Trevor Bauer in a 7-4 loss to the Cincinnati Reds on Tuesday night.

Indians closer Cody Allen (2-4) allowed six runs after getting two outs in the ninth, the last three charged on Votto’s sharp hit to right off Dan Otero. Adam Duvall also doubled in two in the ninth, while Jose Peraza and Eugenio Suarez each hit an RBI single. Cincinnati had seven straight batters reach with two outs, and the inning didn’t end until Scooter Gennett ran into the third out at third base on Suarez’s single.

Bauer was brilliant, striking out 12 over eight scoreless innings in his first appearance since being named to the All-Star team for the first time.

BOSTON (AP) — Andrew Benintendi bolstered his All-Star credentials with a pair of doubles and two RBIs in his final game before fan votes are tallied, and Boston extended its winning streak to eight games.

Jackie Bradley Jr. hit a pair of RBI doubles and Xander Bogaerts hit a two-run triple as Boston scored five runs in the third and won for the 15th time in 18 games.

Matt Barnes (3-2) got the win with one inning of relief. He was the fourth of five relievers the Red Sox rode to another victory and improve on the best record in the majors.

The Rays moved three games above .500 for the first time since Aug. 6 last year after posting their 13th win in the last 14 home games.

Shaw and Tyler Saladino had two RBIs each, and Milwaukee won for the seventh time in nine games. Jhoulys Chacin (8-3) allowed four runs and seven hits in 5 2/3 innings. He struck out three and walked three.

Franco drove in four runs as the Phillies, who began the day tied with Atlanta atop the NL East, won for the 10th time in 13 games. Nick Williams had three hits and two RBIs, and Rhys Hoskins also got three hits.

Greg Bird homered and drove in four runs for the Yankees, who own an inexplicable 4-5 record against the last-place Orioles.

Machado brought the Orioles back from deficits of 3-2 and 5-3 before Schoop won it in the ninth against Dellin Betances (1-3).

The Braves, who have lost six of their last seven, fell to second in the NL East after beginning the day tied with Philadelphia for the lead. Atlanta had held at least a share of first since May 30.

Toronto was limited to three hits through seven innings by Julio Teheran and Jesse Biddle, and the game was tied 1-1. The Blue Jays broke out with five hits off A.J. Minter (3-2) and Shane Carle in the eighth.

Stroman (2-6) gave up one run and six hits with two walks in seven innings for his second win in Atlanta in two seasons.