Legion Baseball: Kannapolis back on the radar 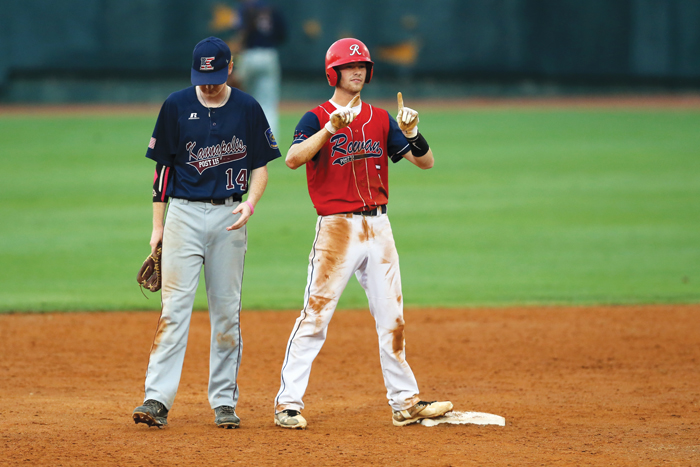 James Sipes/for the Salisbury Post Rowan’s Garrett Alewine, right, stands on second base as Kannapolis’ Lane Argabright (14) looks on, during an earlier game this season. Both teams have made it to the American Legion Area III semifinals, which begin Thursday.

KANNAPOLIS — The Area III American Legion baseball semifinals will include the three programs that have combined to win the last seven area championships — Randolph County, High Point and Rowan County.

No surprise there. Those three are the blue bloods, the royalty, of Area III, and they’ve got the three best venues in which to play. They have fan bases. They have well-known coaches. Even the most casual Area III Legion fan knows Ronnie Pugh, Rob Shore and Jim Gantt, respectively, pilot those flagship programs. Those programs still drum up enough interest that a few college kids commit their summer to play for them. That’s critical to success in today’s Legion world,  where showcase baseball has siphoned away a portion of the standard talent pool.

High Point Post 87 has been stout for the last decade. No state titles yet for the young men who call Finch Field home, but they are frequently in the hunt. High Point grabbed Area III titles in 2011, 2012, 2014 and 2016.

Yes, 2016. That was a year Rowan County won the state and Southeast Regional and nearly won the World Series, but High Point still beat Rowan for the Area III hardware.

As far as Randolph County Post 45  (once known as Asheboro),  the guys who play at McCrary Park have been winning steadily for about 20 years now. Randolph took recent Area III  titles in 2013 and 2017. Randolph also  is the defending state and regional champ and won a couple of games in the 2017 World Series.

Then there’s Rowan County Post 342. Rowan’s been good just about every summer for 50 years running at Newman Park. Rowan has won more Area III championships than anyone. Eighteen of them, if you count the two the program won as Salisbury Post 14 in 1954 and 1955, and everybody does. Rowan, however, hasn’t won a lot of those area titles in modern times — just two of the last 15. That’s hard to believe, but blame Randolph and High Point for that.

The fourth team in the Area III semis, the party-crasher, is one that hasn’t been alive this deep into a season in a long time. Kannapolis has been off the Legion radar for a dozen years.

Kannapolis has storied Legion tradition, but it’s mostly ancient tradition. Kannapolis boasts four state titles, but they were in 1946, 1947, 1952 and 1961.  Kannapolis also owns 11 Area III titles, second only to Rowan County, but the last one came in 2006. That Kannapolis team was powerful. Kyle Seager, now a 30-year-old slugger for the Seattle Mariners, belted 13 homers in the summer of 2006, but he was only second on the Kannapolis club in round-trippers. Jerod Faggart, the strapping catcher, crushed 18 long balls.

From 2007-17, Kannapolis Legion trudged to a bleak 95-145 record, with just one winning season. That was in 2012 when Kannapolis went 16-8 and finished second in the regular season but was jettisoned from the playoffs in the first round by Statesville.

Before sweeping Kernersville in the first round this season and following that up with a second-round sweep of Winston-Salem, Kannapolis had not won a single playoff series since 2006 when Kannapolis took out Mooresville, Rowan County, Kernersville and Randolph County to reign as Area III champs.

Kannapolis finished second this season, one game behind Rowan  in the Southern Division of Area III, but there were still plenty of skeptics. Kannapolis had fallen to Winston-Salem in the playoffs in 2015, 2016 and 2017 — losing two games to one in a best-of-three series every time — so a lot of people expected Winston-Salem to take out Kannapolis again.

But that didn’t happen. Kannapolis scored 25 run for coach Joe Hubbard in the three games and got the sweep.

Post 115 has a good team this year (15-8) and split its two meetings with Rowan, winning at home, losing a tight one at Newman Park.

Northwest Cabarrus High coach Hubbard has been around, off an on, for a long time with Kannapolis Legion. He assisted Empsy Thompson on the 2006 team, and he was the head coach in 2000 when Kannapolis, seeded ninth for the Area III playoffs, made an unexpected and amazing run to finish as Area III runner-up. That was the first season of the single-site, double-elimination state tournament, and Kannapolis was there along with Rowan County. Kannapolis won twice in that state tournament before finally being knocked out by Rowan.

Hubbard knew before the season that this could be the best Kannapolis team in a while.

“I thought we would hit,” Hubbard said. “I just didn’t know about our pitching depth, and Legion baseball is mostly about pitching. You have to be able to throw strikes and let your defense work.”

But then Hubbard got a surprise addition —  Rohan Handa, a terrific lefty pitcher as well as a good-hitting first baseman, a Cannon School graduate who was headed to Yale University. Handa is 6-1 on the mound.

“We certainly hadn’t  planned on having Rohan,” Hubbard said. “But he decided he wanted to play Legion, and he’s helped a whole lot.”

Kannapolis also has a talented homeschooler in slugger/pitcher Michael Harrell, and it’s not just A.L. Brown Wonders and Northwest Cabarrus Trojans like it was in 2006. Kannapolis moved its base school from A.L. Brown to Northwest Cabarrus years ago, so it also attracts players from Robinson and Cox Mill. Robinson’s Ryan Hodges is an assistant coach.

Kannapolis has the South Piedmont Conference Pitcher of the Year, Robinson’s Jason White, on the roster, as well as the SPC Player of the Year, Northwest center fielder Devin Faggart.

Kannapolis got a couple of college buys back in Surry’s Jacob Tuttle, a good hitter as well as the closer, and Montreat’s Lane Argabright, who can play a lot of positions.

“Our guys have done a great job,” Hubbard said. “We’ve only got 13 guys, but we’ve got 13 good ballplayers, 13 great kids. What we don’t have is depth. We don’t  have the pitching depth that a Rowan County or a Randolph County has, and that will make it tougher for us in a long series.”

Kannapolis  Post 115 experienced a rainout the first night of the Winston-Salem series, but then won three straight nights. The sweep was vital as far as giving Kannapolis a reasonable chance in its semifinal series.

“The sweep meant we had Tuesday and Wednesday off,” Hubbard said. “That meant rest for our catchers (usually Austin Dayvault) as well as for our pitchers. With the pitch count rules, if we’d had to play a game on Tuesday, we would only have had a couple of arms available.”

Hubbard has bustled through a busy summer, as he tries to watch his three sons Cal, Ty and Brooks play baseball,  as well as coach.

Now it’s going to get even busier. Kannapolis starts a best-of-five series Thursday at 7 p.m. at Randolph County’s McCrary Park.