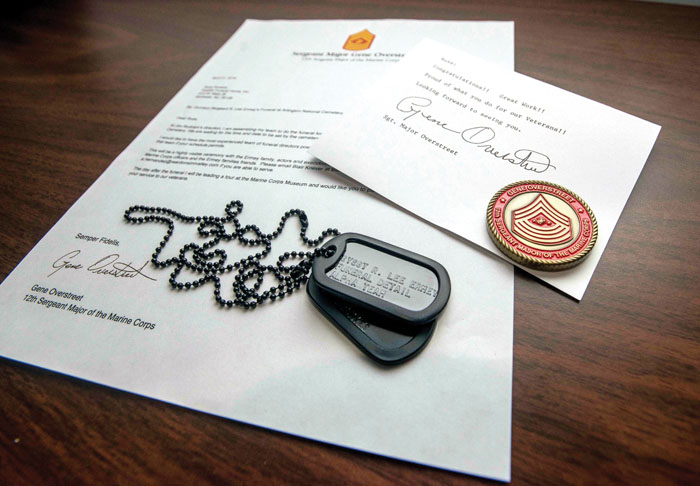 Russ Roakes, a funeral director with Powles Staton Funeral Home, will be part of a funeral detail at Arlington National Cemetery for Marine veteran and actor R. Lee Ermey. Roakes will wear these special dog tags during the ceremony. Jon C. Lakey/Salisbury Post

SALISBURY — Sometime in August, funeral director Russ Roakes will participate in a service at Arlington National Cemetery. It’s hard for him to think of anything else.

“For a funeral director,” says Roakes, who works for Powles Staton Funeral Home in Rockwell, “I don’t think there will be a higher honor than to work a funeral at Arlington.”

Adding to the uniqueness of this privilege for Roakes is the fact the Arlington National Cemetery service will be for Marine Sgt. R. Lee Ermey, who burst into the national consciousness for his memorable performance as a gunnery sergeant in the 1987 movie “Full Metal Jacket.”

Ermey went on to play many similar roles, collecting more than 60 credits in movies and television. He provided the voice for Sarge in the “Toy Story” films and played Gen. Kramer in “Toy Soldiers,” Bill Bowerman in “Prefontaine” and Mayor Tilman in “Mississippi Burning.”

On television, he was host for the History Channel’s “Mail Call” and “Lock ‘n’ Load With R. Lee Ermey.”

But why is Roakes involved in Ermey’s Arlington ceremony?

It goes back to early June when Roakes was named Executive of the Year by Veterans Funeral Care, a national organization to which Powles Staton Funeral Home belongs. Roakes received the award at Veterans Funeral Care’s annual “Think Tank” conference in Clearwater Beach, Florida.

By then, some funeral directors connected to Veterans Funeral Care already had conducted Ermey’s viewing, procession, church service and cremation in Palmdale, California, after Ermey’s death from flu-related pneumonia on April 15.

Twelfth Sgt. Maj. Gene Overstreet of the Marine Corps, a friend of Ermey’s, also had asked Jim Rudolph, president of Veterans Funeral Care, whether his organization could take care of the ceremony in Arlington.

In turn, Rudolph invited all of the organization’s Executives of the Year — Roakes and those from years past — to be part of the Arlington National Cemetery “Elite Team” funeral detail.

Roakes learned on the last day of the conference he would be participating, and he cherishes a letter and Marine challenge coin received from Overstreet.

“This will be a highly visited ceremony with the Ermey family, actors and executives from Los Angeles, California, and United States Marine Corps officers,” Overstreet said.

The overall logistics, date and time are still being worked out. “It should be in August,” says Roakes, who had never met Ermey but has seen “Full Metal Jacket” several times.

Roakes has received special dog tags that he will be wearing at the Arlington ceremony. His name is on one of the dog tags, and Ermey’s is on the other.

Roakes is well known within the Veterans Funeral Care network. He speaks annually and gives a PowerPoint presentation on marketing strategies at annual get-togethers.

Powles Staton is the only funeral home in VFC to have won the three top awards — the President’s Award, Operation Toy Soldier Award and now Executive of the Year.

With whatever veterans-related idea Roakes has come up with through the years, the Staton family has given him full support.

“I have to give credit to Matt and Will and Steve Staton,” Roakes says. “They’re just as big a part of Executive of the Year.”

Some of the programs Powles Staton Funeral Home does in connection with veterans include “Retire Your Flag With Honor,” which burns an American flag with veterans who are cremated; an annual lunch and breakfast for veterans; and Operation Toy Soldier, which provides Christmas gifts to children of N.C. national guardsmen.

Over four years, the local Operation Toy Soldier has collected 10,000 new toys for military families. The Rowan County Sheriff’s Office helps in the effort when a 72-hour collection point is set up outside the Salisbury Walmart store.

Otherwise, toys are collected in some 20 barrels located in offices and businesses throughout the county.

For being Executive of the Year, Roakes received a painted, handcrafted American flag made of different woods. In coming days, he will receive an inscribed ring.

The Statons knew about a month before the annual VFC conference that Roakes would be getting the award. Roakes said he figured something was up about a week before leaving for Florida.

“The Statons did try to keep that under wraps, (but) Will was acting suspicious,” Roakes says.

Before his acting debut as a helicopter pilot in “Apocalypse Now” and a drill instructor in “The Boys in Company C,” Ermey served 11 years in the Marine Corps. He spent 14 months in Vietnam and then Okinawa, Japan, where he became a staff sergeant.

Roakes, 47, has been to Arlington National Cemetery once as a visitor, taking a trolley tour and witnessing the changing of the guard. He has worked for Powles Staton almost 17 years.

Roakes keeps looking for more things the funeral home can do in connection with the military or veterans.

For the month of July, Powles Staton is conducting a school supply drive for the N.C. National Guard Family Readiness Program. School supplies and backpacks can be dropped off at the funeral home, 913 W. Main St., Rockwell.

Another plan in the works is to transform a not-so-used viewing room at the funeral home into  a military museum.

Roakes already has items donated by the National Guard and several people in the community and says he welcomes more.

Roakes hopes the military room can be open by the time the next veterans breakfast comes around in October.