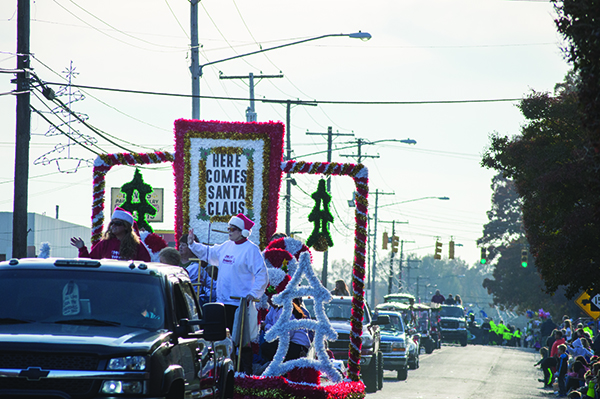 Cars and floats file down Main Street in Landis as part of the 2016 South Rowan Christmas Parade.

The Christmas decorations in the new Landis town budget are losing their luster before they’re even purchased. That’s good, because whatever explanation town officials come up with for splurging $100,000 on decorations, taxpayers aren’t buying it.

The Board of Aldermen got an earful at last month’s public hearing about their  2018-19 spending plan. The budget increased the property tax rate by 5 cents, upped water and sewer rates, and — since Landis runs its own electric utility — raised power rates 3 percent.

Town officials say the board went too far when it reduced rates for electricity by 5 percent a couple of years ago. This year’s 3 percent increase lets residents keep the remaining 2 percent cut.

That’s one way to spin it.

The power increase was reportedly intended to cover substation upgrades, system expansion to new residential subdivisions, system improvements and, the most controversial expense, a $100,000 line item for Christmas decorations.

The decorations are looking iffy now, judging from comments at Monday’s town board meeting. Town Manager Reed Linn said money for the lights would come from last year’s surplus funds, not from this year’s new revenues. And if a need arises that’s more important than Christmas lights, well, the town will have to put up with the decorations it has for another year. The lights will only be purchased if the funding is available, Linn said.

The people have been heard — at least on the decorations — but they should remain vigilant. Landis residents are right to question the town’s sudden need for so much new revenue. It can’t all be due to Salisbury sewer rate increases or the now-infamous holiday upgrade. Town officials can reassure residents by moving quickly on the $300,000 street project and being transparent on all expenses. This budget has stirred up citizen distrust. Only openness and accountability can win back taxpayers’ confidence.