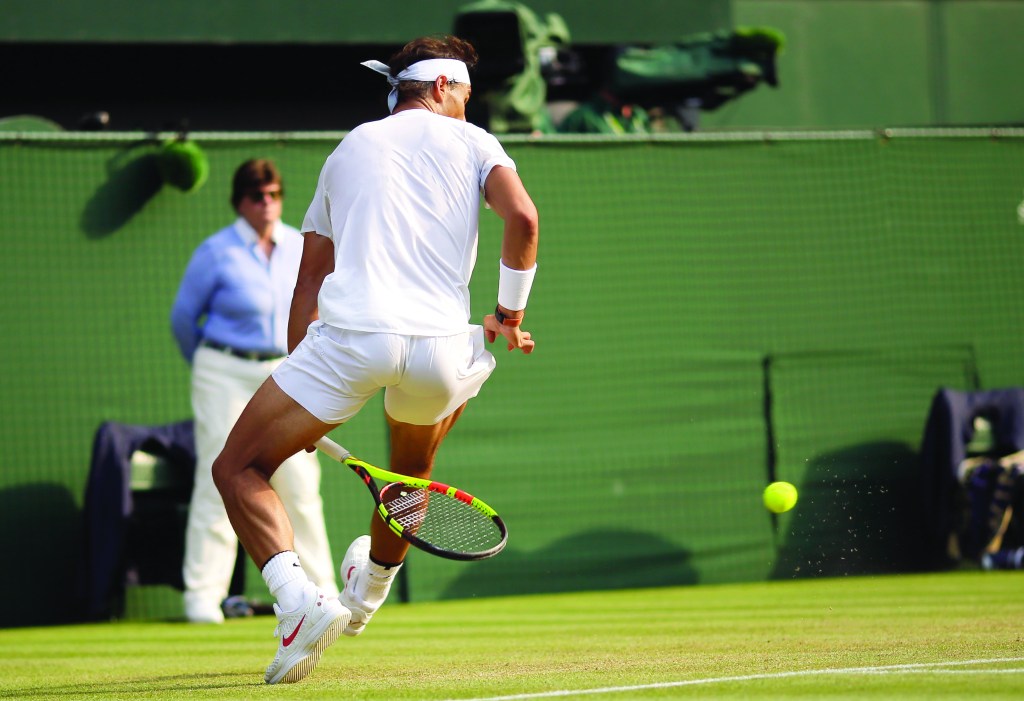 LONDON (AP) — They roared for Roger Federer just for showing up, greeting his arrival at Wimbledon’s main stadium as if his mere presence were enough to justify the price of admission.

They clapped and yelled when Federer’s drop volley capped a 16-minute tour de force of a first set in which he won 21 of the first 23 points.

They eventually sent him back to the locker room with a standing ovation, acknowledging the talent displayed by Federer during a 6-0, 7-5, 6-4 victory over 22nd-seeded Adrian Mannarino of France in the fourth round Monday, yes, but also his superiority over the course of a career that has produced eight Wimbledon championships and 20 Grand Slam titles, both records for a man.

Federer, who has won 32 consecutive sets at the tournament and held serve 81 games in a row, was asked whether he paused for even a moment to wonder why he wasn’t being given more of a test.

His mastery was only the beginning of things for those who spent 120 pounds (about $160) to be at Center Court and were afforded the rare treat of watching three of the greatest to ever lift a tennis racket.

Federer was followed by Serena Williams, she of the seven Wimbledon trophies among her 23 majors, who was hardly challenged in a 6-2, 6-2 win against 120th-ranked qualifier Evgeniya Rodina of Russia. And Williams was followed by Rafael Nadal — two titles at Wimbledon, 17 at all Slams — who dispatched 93rd-ranked Jiri Vesely of the Czech Republic 6-3, 6-3, 6-4.

The only other Wimbledon champion left in either bracket, Novak Djokovic, beat 40th-ranked Karen Khachanov 6-4, 6-2, 6-2 on No. 1 Court, then said he’d like to get as much time on Centre Court as Federer and Nadal do.

Was Mannarino intimidated by playing in that hallowed arena?

“The fact that it is the Centre Court, and the fact that it is a lot of people in the stands — it’s not changing anything, actually. The only different thing is that it’s Federer in front of me, and he’s a really good opponent. It makes the job harder,” Mannarino said. “This is what is not easy to handle.”

He showed up wearing a plain white T-shirt, bereft of any obvious sponsor’s logos, looking like someone out for a casual hitting session in a public park. At least it appeared to be the right size. What a difference from a week ago, when Federer’s debut of new duds after splitting from Nike drew so many headlines.

It took Mannarino so much toil and trouble to win one game, saving four break points to hold to begin the second set. He was able to tread water until 5-all, when Federer returned a 123 mph serve, quickly gained control of a baseline exchange, then hopped and screamed, “Come on!” as a backhand flew long for the break. Federer also broke, then held to end the match.

“I think,” Federer said when it was over, “I can be very pleased.”

The women’s quarterfinals are Tuesday, with Williams vs. Camila Giorgi, two-time major champion Angelique Kerber vs. No. 14 Daria Kasatkina, 2017 French Open champion Jelena Ostapenko vs. Dominika Cibulkova, and No. 13 Julia Goerges vs. No. 20 Kiki Bertens.

The other matchup on the top half of the draw is No. 9 John Isner against No. 13 Milos Raonic, who beat Federer in the 2016 semifinals before losing in the final.

On the bottom half of the bracket, it’ll be 12-time major champion Djokovic against 2014 U.S. Open runner-up Kei Nishikori, and No. 2 seed Nadal against either 2009 U.S. Open champion Juan Martin del Potro or Gilles Simon. Del Potro was leading Simon two sets to one when their match was suspended because of darkness Monday night.

For Nadal, this marks a return. He hadn’t been this far at the All England Club since 2011, losing to men ranked 100th or worse on four of his past five appearances.

“It’s true, it has been a while,” Nadal said. “But when I come here, I come here thinking that I can do a good result, no?”

LONDON (AP) — At long last, John Isner is a Wimbledon quarterfinalist, finally making that far in his 10th appearance.

He’s also in the final eight at any Grand Slam tournament for the first time since 2011.

It allows the 33-year-old Isner, the highest-ranked U.S. man, to have something about Wimbledon to relish other than his victory in the longest match in tennis history: 70-68 in the fifth set against Nicolas Mahut after 11 hours spread over three days in 2010.

He’d never even been past the third round at the grass-court Grand Slam until this year.

“Certainly this tournament, since that long match, has sort of been a house of horrors for me,” Isner said. “I’ve lost a lot of close ones since that match in 2010 — a lot of very, very close ones, a lot of deep five-set matches, third round especially.”

He had lost four five-setters in a row at Wimbledon until last week.

He’d been 0-3 in the third round until last week.

“There was certainly some doubt, when you have left this tournament the last nine, 10 years pretty disappointed with my result, gone home sort of hanging my head a little bit,” Isner said. “But not the case this year.”

His main asset is his booming serve, which he sees getting a boost because of the dry, hot weather that produces even bigger bounces than usual.

If he can pick up just the occasional service break, he’s tough to beat right now.

“It was a pretty weird match, to be honest. A lot of aces, short rallies. There was no play from the baseline at all. That was a bit annoying, because I was used to playing long rallies — play the point, construct the point,” said Tsitsipas, who was trying to become the first Greek man to reach a quarterfinal in Grand Slam history.

“But today it seemed like there was no plan when I was playing. It was just happening, like, randomly. He was serving very well and didn’t give me a lot of options to break.”

Raonic’s isn’t too shabby, either. He hit 37 aces and never faced a break point against McDonald, who won the NCAA singles and doubles titles for UCLA in 2016.

“The key is going to come down to one, two, three points, here and there. That’s pretty much it. I don’t think we’re going to have many consecutive opportunities on each other’s serves. It’s going to be coming down to those moments (and) being sharp in the right moments, who is going to be able to step up, be the one that’s able to dictate, putting more pressure on the other guy,” Raonic said. “I think it’s going to be decided by small margins.”