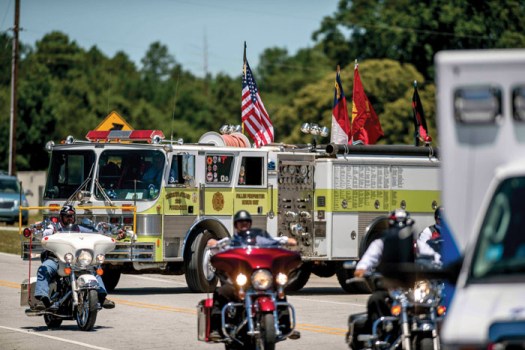 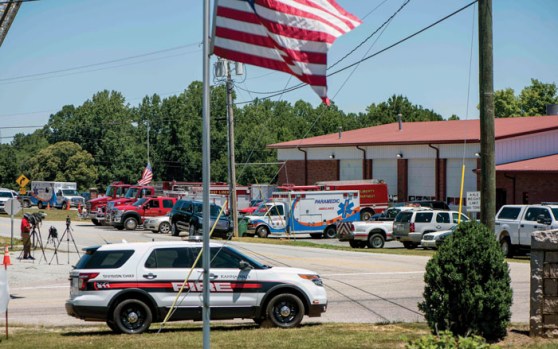 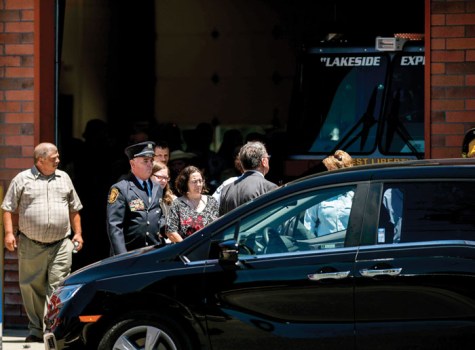 The family of Michael Goodnight leaves the service for the procession to the graveside. Jon C. Lakey/Salisbury Post 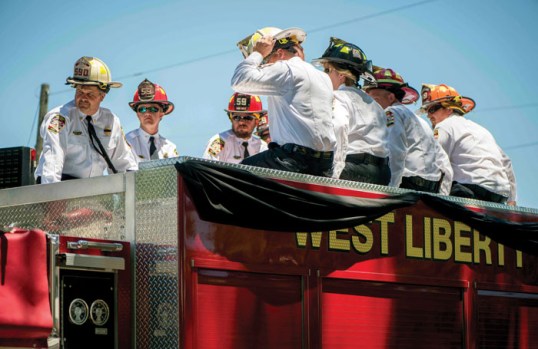 Eight members of the West Liberty Fire Department ride on top of the 'first out' Engine 591. Jon C. Lakey/Salisbury Post 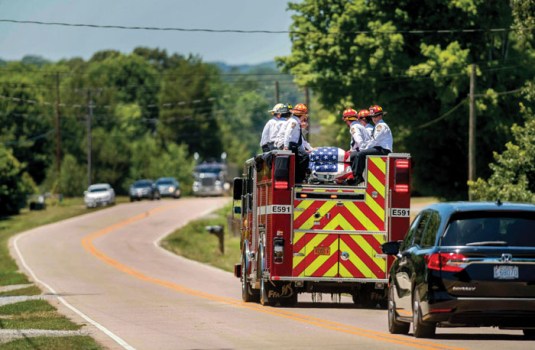 A graduate of North Rowan High School and Marine Corps veteran, Goodnight died Wednesday in a traffic accident. He was responding to an emergency call at the time.

The Rev. John Schell, pastor of St. Luke’s Reformed Church, which Goodnight attended, said Goodnight was passionate about being a first responder.

“He was always listening to the scanner. It was always on his side and always on,” Schell said. “Even when it came to church, it was always on. He wanted to know what was going on.”

Schell said Goodnight’s passion reflected his desire to help people, to make a difference in his community, and to minister and comfort.

“I  want to encourage you to be passionate about things that matter, as he was,” Schell said. “God has given us a purpose, and we live within that.”

Schell described Goodnight as a man of faith who trusted that his life was in God’s hands despite multiple health struggles.

The pastor’s words were followed with the song “Long Black Train” by Josh Turner.

As the song played, members of the West Liberty department were overrun with emotion. Tears flowed, and the men and women clung to one another for comfort.

He’d been a firefighter off and on for 39 years, since he was 16 years old, Brewton said.

“Michael lived everything he was doing with the firefighting stuff, and he always helped people,” said Brewton. “There was one time they said that he spent four and a half hours directing traffic, and he never complained.”

Brewton said Goodnight was like a brother to all in the department, and he was loved by all. He will be missed but never forgotten, he said.

Jinny Hunt, Goodnight’s stepdaughter, read an original poem in honor of Goodnight titled “Firefly.” The poem was flanked by the songs “Amazing Grace/My Chains Are Gone” and “Precious Lord,” sung by Christy Trexler and Callie Trexler.

Before the family left for a graveside service, Derrick Clouston and Dana McKim performed “Ringing of the Bell,” a traditional tune used to honor firefighters who died in the line of duty.

Goodnight and his family were then escorted out to a “Sea of Blue,” myriad uniformed first responders and personnel.

Active and honorary pallbearers were fellow firefighters. They carried Goodnight’s casket to West Liberty engine No. 591. The truck led a procession to Rowan Memorial Park, passing under the extended ladder of Rockwell’s ladder truck No. 70.

Atop the truck, an American flag waved somberly against the summer sky.

“And so, to those who have selflessly given their lives for the good of their fellow man,” said Clouston. “Their tasks completed, their duties well done, to our comrades, their last alarm; they are going home.”