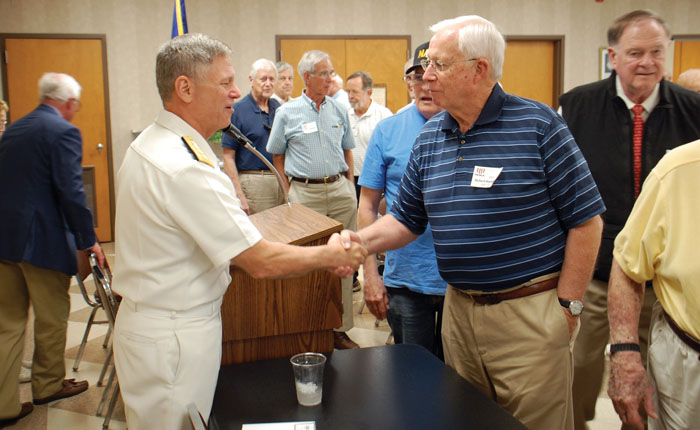 SALISBURY — Rear Adm. Jim Loeblein left his hometown audience with some positive impressions of today’s fighting forces and the people they depend on for funding and support — U.S. senators and representatives.

Loeblein, who works out of the Pentagon as chief of legislative affairs for the secretary of the Navy, said Monday he has yet to find any member of Congress who is not supportive of the military or doesn’t ask good questions about U.S. defenses.

Loeblein spoke to the Central Carolina Chapter of the Military Officers Association of America. The group met at Rufty-Holmes Senior Center, where members and guests filled the luncheon room to hear the speaker.

As for today’s military officers and servicemen and women, Loeblein said, “It is truly an amazing force. … Right now, I think we’re in good hands.”

Serving in his 33rd year, Loeblein described a talented Navy that is young and smart and the reason why he wants to continue his career — it helps keep him younger and smarter.

Loeblein looks forward to every day at the Pentagon.

Loeblein said it was a honor to be back in his hometown to address the MOAA chapter. Looking out to the audience, he could see family, neighbors, coaches, principals and doctors he knew from his years growing up here.

The crowd included his twin brother, Tom, a Marine who lives and works in Salisbury and is a fellow graduate of the Naval Academy.

Also in attendance were their sister, Carolyn Byrd of Salisbury, and their parents, Bob and Anne Loeblein of Salisbury.

The Loeblein boys graduated from Salisbury High in 1981 and the Naval Academy in 1985.

Bob Loeblein, a former Navy officer himself, told a story Monday demonstrating some of the determination Jim has shown throughout his Navy career.

Jim and Tom played football from Gra-Y through high school, and it wasn’t until his last game at Salisbury High that Jim suffered his first serious football injury — a broken leg that required the insertion of a metal rod.

By that time, Jim had applied for the Navy ROTC and Naval Academy, and he was told he would not be considered for either because of the broken leg. Jim would not accept that decision, and he tracked down the name of the person to whom he could appeal.

He learned he would need clearance from the chief medical officer of the Naval Academy. Bob Loeblein said Jim had several telephone conversations with the officer, who eventually decided if Jim could attend summer camp and demonstrate he was physically up to the academy’s demands, he could enroll in the fall.

Bob Loeblein said it was Jim, not his parents, who made all the calls and contacts so he wasn’t denied. In his Navy career that followed, Jim Loeblein steadily rose up the ranks, serving in important jobs on both land and sea.

“I have finished my sea duty,” Loeblein said in response to a question.

Among many assignments, he has been assistant deputy chief of Naval Operations for operations, plans and strategy, and he previously worked with the legislative branch in Washington as Navy Senate liaison in the Office of Legislative Affairs.

Loeblein is coming up on his two-year anniversary as the Navy secretary’s legislative affairs chief. He heads a 48-person team and bragged that it’s half the size the Air Force dedicates to Congress and a third of the Army’s legislative effort.

Loeblein said lieutenants and captains are the face of his team on Capitol Hill and noted the importance of having a permanent presence in the Senate and House office buildings.

But the majority of his staff works with him back at the Pentagon, doing the research necessary for congressmen and the armed services committees of the Senate and House.

His team members at the Pentagon are in constant contact throughout the day with staff members of those committees. Plenty of questions also come from military assistants on the staff of each member of Congress.

“We don’t do a lot with the big four,” Loeblein said.

Much more is done with the other 433 House members and 98 senators, their personal staffs and the professional personnel with the Armed Services committees.

When you see congressional delegations take fact-finding trips around the world, there’s a good chance Loeblein’s team has been involved with things such as visas, tickets and itineraries.

“We do logistics,” Loeblein said.

Members of Congress also are constantly dealing with constituent matters related to the military. “We answer over 5,000 constituent requests a year. … It’s a team effort,” Loeblein said of working with congressional staff.

Much of the Navy’s legislative work centers on the budget and seeing that the National Defense Authorization Act is approved.

His team provides the background information that the secretary of the Navy and chief of naval operations use when they defend the Navy budget on Capitol Hill, Loeblein said.

Military officers are extremely proud, Loeblein said, that the National Defense Authorization Act has passed for 58 straight years because of the work going into it each time.

With a new secretary of defense in Gen. James N. Mattis has come a new national defense strategy, Loeblein said. The focus is regaining the United States’ competitive military advantage vs. Russia and China.

Demonstrating capacity, such as last year’s 355 SHIPS Act, “is a big part of this,” Loeblein said. Last year’s budget authorization made it U.S. policy to achieve a Navy minimum requirement for a 355-ship fleet.

Loeblein said the Navy fleet is at 285 ships now.

Some other highlights of Loeblein’s talk:

• He said only 24 percent of 18- to 22-year olds who want to join the Navy qualify. What are the main disqualifiers? Loeblein cited low grades, medications, criminal records and drugs.

• Asked why men and women want to enter the military today, Loeblein said some want to see the world, earn money for college and do things they’ve never done before.

• Today, less than 1 percent of the U.S. population serves in the military. Loeblein questioned what kind of outreach will be necessary for military recruitment 20 to 30 years from now.

• Loeblein encouraged those in his Salisbury audience to inspire young adults to consider military careers. He noted that 84 percent of people serving in the Navy today had a grandfather, parent or sibling who also served.

• About 20 percent of members of Congress have served in the military, Loeblein reported.