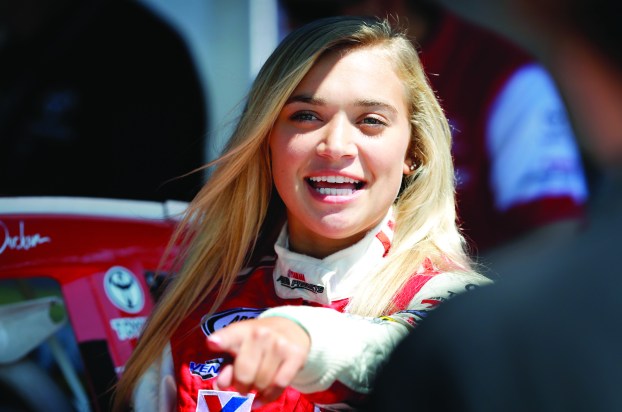 ARCA drive Natalie Decker, of Eagle River, Wis., talks to a crew member during practice for the ARCA Series auto race, Saturday, July 7, 2018, at Iowa Speedway in Newton, Iowa. Decker's team, Venturini Motorsports, made stock car history on June 29th by starting three female drivers in the same race for the first time in the modern era of the sport. (AP Photo/Charlie Neibergall)

NEWTON, Iowa (AP) — Stock car racing team Venturini Motorsports has had a tradition of employing women that stretches back for decades.

On June 29, the ARCA outfit made history — starting three female drivers in the same race for the first time in the modern era of the sport.

Natalie Decker, Leilani Münter and Toni Breidinger finishing 12th, 18th and 20th respectively at Chicagoland Speedway. By starting as a trio, they helped raise the profile of women in a sport long dominated by men.

“We’re not trying to bill ourselves as this team that is championing female drivers by any means. It just so happens that we’ve had a number of females come through,” team spokesman Tom Venturini said. “We’re a championship-caliber team. We’re putting the best drivers in the seat, male or female.”

Team owner Bill Venturini won Automobile Racing Club of America titles in 1987 and 1991, the first coming with an all-female pit crew — known as the “Ultra Blue Crew” — led by his wife and team co-owner Cathy Venturini.

“When that happened, the whole idea of it was, ‘we’re competitors first.’ It was not a publicity stunt,” Tom Venturini said. “We had the best physically fit women to do that job. They outperformed the men. It really just happened to be that they were women on the crew.”

In subsequent years, the team has given seats to the likes of Milka Duno, Alli Owens, Johanna Long, Nicole Behar and others. Breanna O’Leary is a member of VMS’ pit crew this season as a tire changer.

The latest woman hoping to prove she’s worthy of a top-tier ride with the help of VMS is 21-year-old Decker, a Wisconsin native in her first full season in ARCA.

Father Chuck Decker was both a race car and snowmobile racer. He also owns the Eagle Grove Derby Track in Wisconsin, which hosts the annual World Championship Snowmobile Derby.

Chuck tried to get Natalie into snowmobiling, though it never stuck. He took her to a go-kart track when she was 6, and it ignited a passion for racing cars.

Decker soon started watching NASCAR races every week with her father, who got his daughter her first go-kart when she was 9.

“The goal has always been NASCAR. Even before I started racing, I remember when I was super young I told him that I wanted to race NASCAR,” she said.

Decker won races in go-karts, late models, trucks and stock cars as a youngster. NASCAR pegged her for its Drive for Diversity program in 2015, and Decker tried but failed to qualify for a NASCAR truck series race at Martinsville in 2016.

She then raced a limited schedule in the ARCA series last season before landing a full-time ride for 2018.

Decker, one of the older drivers in ARCA, got off to a promising start by winning the pole and finishing fifth at the season opener at Daytona. But she had hernia surgery in late May and finished outside the top 10 in four of her last five races.

Decker views this year as an educational opportunity, with an eye toward fulfilling her dream of competing in NASCAR.

“I feel like it’s just all learning, because all these kids got to learn at such a young age, and I don’t feel like I’m that much older than them,” Decker said. “It’s been great so far.”