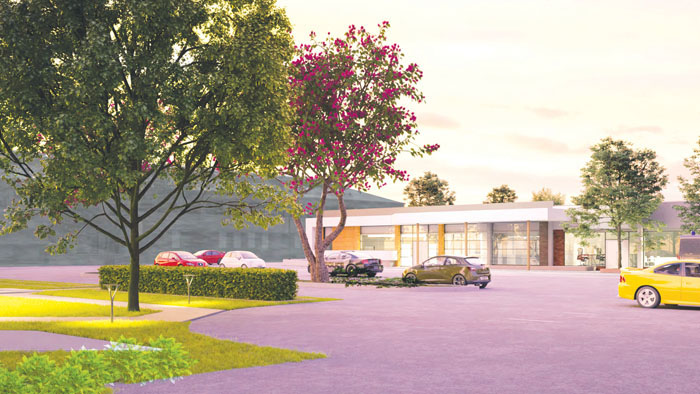 An architect’s visualization shows the design for municipal offices and a park at Park Plaza in Spencer.

SPENCER — The Spencer Historic Preservation Commission on Monday approved a certificate of appropriateness for the planned makeover of Park Plaza.

During a nearly four-hour meeting, the commission heard a presentation from architect Keith Wales on plans for the town’s new municipal offices, Police Department and park. It was the commission’s job to make sure that designs, materials and colors were in keeping with Spencer’s historic downtown district. Without the board’s approval, the project could not move forward.

The vacant shopping complex belongs to PI Holdings LLC. The town has entered into a purchase agreement for 20,000 square feet of space bordering Fifth Street and an outparcel that runs to South Salisbury Avenue.

Currently, the building is empty, and the outparcel is a sea of concrete. But Wales, the town board and members of the Historic Preservation Commission have other hopes.

Wales reimagined the old structure with a sleek, modern facade and the parking lot as a green space and park.

“Our proposal is to rewind the clock and go back a little bit and re-give the town its park,” he said.

While a more modern building may seem out of character, Wales pointed out that it’s important that newer buildings not imitate historic ones too closely.

“We don’t want to create a false sense of history,” he said. “We want history to stand on its own.”

Designs still need to be compatible with the rest of the town and historic district, however. In that vein, Wales drew inspiration from the North Carolina Transportation Museum, which is just across the road. Elements of the design echo those found in the Transportation Museum — from the window structure to the columns out from.

“So we’re always relating back to that point of inspiration,” he said.

However, some of that proved to be a hard sell to commission members. As the night wore on, they picked apart the design, aware that whatever they approved would become a central focus of the town for decades to come. Members discussed the type and design of siding, building materials and paint color, noting changes they’d like to make as they went along.

Some said they felt the design’s focus seemed to be in the wrong place.

“A lot of attention was to the park and not the town hall,” commission member Robert Bish said. “… I would just have liked to see more attention paid to the town hall part.”

Chairwoman Jacqueline Jensen stepped in to point out that the town used to have a park where the plaza is, long ago.

“I think that might be why more of the focus was on the park — to restore the history of this area,” Jensen said.

After much discussion and debate, the commission agreed to make several substitutions in the design, including changing a proposed chain-link fence to one resembling black wrought iron and changing a proposed wall with concrete treated to look like wood to a wall of vertical stucco panels.