Cal Thomas: Is Europe awakening to the threat? 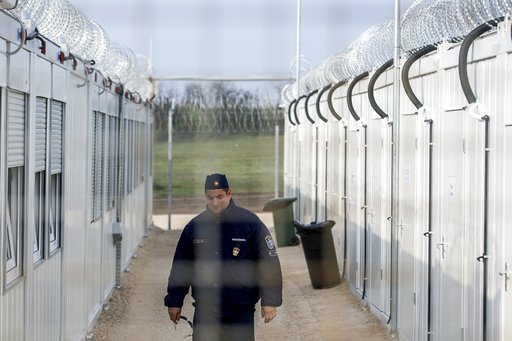 A Hungarian police officer patrols the enlarged transit zone set up for migrants at the Hungary's southern border with Serbia in April 2017. (Sandor Ujvari/MTI via AP)

Much of Europe was asleep, or in denial, when the Nazis took power and began rebuilding their military in violation of the Versailles Treaty that brought World War I to an end. Now, after years of virtually unlimited migration from predominately North African and other Muslim regions, some European nations are awakening to what this could mean for their countries and are responding, hoping it’s not too late.

Sebastian Kurz, the far-right chancellor of Austria, has plans, according to the Daily Mail, to “expel up to 60 Turkish-funded imams and their families and … shut down seven mosques as part of a crackdown on ‘political Islam.’” These mosques, Austria says, are being subsidized by the Turkish government, which is becoming more radical after the recent election, which granted President Recep Tayyip Erdogan new powers as he seeks to create a more “pious generation” in order to change to country and make it more Islamic.

Justification for Kurz’s move comes from a 2015 law banning foreign funding of religious groups. The chancellor told a recent news conference: “parallel societies, political Islam and radicalization have no place in our country. … This is just the beginning.”

President Erdogan reacted by warning of a “war between the cross and the crescent.” That war started centuries ago and manifests itself today in ways not limited to terrorist acts.

German Chancellor Angela Merkel has had a virtual open-door policy, particularly for Muslims from Syria. Recent opinion polls show a majority of Germans now oppose the policy as the burden on social programs increases in direct proportion to the overwhelming majority of immigrants unable to find jobs.

Hungary does not have a problem with Muslim immigrants. A government spokesman told me on a visit last summer it is because Hungary has no “welfare” programs and so immigrants migrate to countries with benefits.

While parts of Europe appear to be awakening from their slumber, the rest of Western society, Canada and the U.S. President Trump excepted, have had a record of denial to what some believe is an ongoing invasion.

In Canada, Sheikh Shafiq Hudda has accused several organizations and individuals of defamation, because they misquoted him as wishing for the “eradication” of all 8.2 million Israelis. In fact, he claims, he was praying for “the eradication of only 6 million Israeli Zionists.”

Thanks for the clarification, Sheikh. Why is he still in Canada?

In a new study of select textbooks currently in use in Saudi Arabia, some of which have been used in Islamic schools here, the U.S. Commission on International Religious Freedom (USCIRF) said it is “disappointed to find inflammatory content remains in Saudi textbooks previously thought to have been removed.”

As The Washington Post noted after a previous review of Saudi textbooks in 2006, “despite the Saudi government’s statements to the contrary, an ideology of hatred toward Christians and Jews and Muslims who do not follow Wahhabi doctrine remains in this area of the public school system. The texts teach a dualistic vision, dividing the world into true believers of Islam (the ‘monotheists’) and unbelievers (the ‘polytheists’ and ‘infidels’).

“This indoctrination begins in a first-grade text,” reported the Post, “and is reinforced and expanded each year, culminating in a 12th-grade text instructing students that their religious obligation includes waging jihad against the infidel to ‘spread the faith.’”

The Islamic Saudi Academy in Fairfax, Virginia, closed in 2016, replaced that year by the King Abdullah Academy. The former taught that adulterers and converts from Islam should be killed and that “The Jews conspired against Islam and its people.”

Why are Islamic schools that teach this stuff and the mosques that support them allowed to remain open?

Some in Europe are awakening to the threat of uncontrolled Muslim immigration. The U.S. and Canada would do well to follow their lead.