All 12 boys, their coach rescued from Thai cave 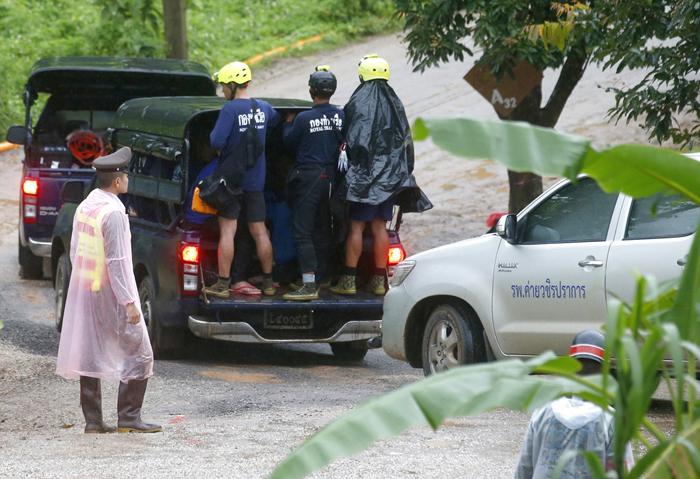 Rescuers move to the entrance to a cave complex where five stil lwere trapped in Mae Sai, Chiang Rai province, northern Thailand Tuesday, July 10, 2018. All the boys and their coach were rescued from the flooded cave. (AP Photo/Sakchai Lalit)

MAE SAI, Thailand (AP) — The Latest on the rescue of a youth soccer team from a flooded cave in Thailand (all times local):
6:55 p.m.
Thailand’s navy SEALs say all 12 boys and their soccer coach have been rescued from a flooded cave in far northern Thailand, ending an ordeal that lasted more than two weeks.
They say the four boys and coach rescued Tuesday, after other rescues in the previous two days, are all safe.
The SEALs say they’re still waiting for a medic and three Navy SEALs who stayed with the boys to emerge from the cave.
___
6:30 p.m.
Three ambulances, their lights flashing, have been seen leaving the site of the flooded Thai cave where rescuers are involved in an all-out effort to rescue members of a youth soccer team and their coach trapped deep within.
Earlier Tuesday, Thai navy SEALS said a ninth boy had been brought out of the cave on the third day of the rescue effort. The departure of the three ambulances suggests others also have been rescued, but there was no immediate official confirmation.
Rescuers hope to complete their mission Tuesday after rescuing four boys on each of the previous two days. That left four boys and their 25-year-old coach still in the cave.
The 12 boys and their coach were trapped by flooding in the cave more than two weeks ago.
___
5:10 p.m.
Thailand’s navy SEALs say a ninth boy has been brought out of a flooded cave in the country’s far north.
The SEALs said on their Facebook page that “the 9th Wild Boar was out of the cave at 4:06 p.m.” Tuesday, referring to the name of the trapped boys’ soccer team.
Rescuers hope to complete their mission Tuesday after rescuing four boys on each of the previous two days.
The 12 boys and their 25-year-old coach were trapped by flooding in the cave more than two weeks ago.
___
3:50 p.m.
An ambulance has been seen leaving the site of the Thai cave where divers are carrying out what they hope is a final mission to bring out four boys and their soccer coach still trapped deep inside.
At least nine ambulances have been waiting at the site after the leader of the rescue operation said Tuesday’s aim was to bring out all five as well as a medic and three Thai Navy SEALS, who have been with the trapped boys.
Officials have generally waited hours to confirm rescues.
Tuesday’s operation began just after 10 a.m.
In the past two days, eight boys were rescued and are now in a hospital isolation ward while they are tested for any possible infections. Medical experts say they are in high spirits and generally healthy.
___
11:50 a.m.
The Thai official overseeing the effort to rescue members of a teen soccer team trapped in a flooded cave says a third rescue operation has begun Tuesday and aims to bring out the remaining four boys and their coach.
Chiang Rai Gov. Narongsak Osatanakorn says the rescue mission began at 10.08 a.m. and involves 19 divers. He said a medic and three SEALS in the cave, who’ve been looking after those trapped, will also come out.
Narongsak said, “We expect that if there is no unusual condition … the 4 boys, 1 coach, the doctor, and 3 SEALs who have been with the boys since first day will come out today.”
The eight boys rescued after being trapped for more than two weeks were described as generally healthy.
___
10:30 a.m.
A Thai public health official says the eight boys rescued from a flooded cave in northern Thailand are in “high spirits” and have strong immune systems because they are soccer players.
Jesada Chokdumrongsuk, deputy director-general of the Public Health Ministry, said Tuesday that the first four boys rescued, aged 12 to 16, are now able to eat normal food.
He said two of them possibly have a lung infection but all eight are generally “healthy and smiling.”
He said, “the kids are footballers so they have high immune systems.”
The second group of four rescued on Monday are aged 12 to 14.
Family members have seen at least some of the boys from behind a glass barrier.
Four boys and their soccer coach remain in the cave.
___
9 a.m.
Three ambulances along with cars, hummers and soldiers have been seen entering the cave site where rescuers have been carrying out a high-stakes operation to bring out trapped members of a youth soccer team.
Heavy rains lashed the northern Thai region late Monday and a steady downpour has continued Tuesday.
After divers brought out four of the boys Monday evening, authorities indicated the rescue operation would continue for a third day. But they also warned heavy rain could hamper their efforts.
The rescue missions take nearly half a day to complete. Monday’s mission took about nine hours, two fewer than Sunday’s.
So far eight of the boys have been rescued. The team’s 25-year-old coach and four boys are still deep inside the flooded and sprawling cave.
___
8 a.m.
Elon Musk says he has visited the flooded cave in northern Thailand where a youth soccer team became trapped and has left a mini-submarine there for future use.
The tech entrepreneur tweeted Tuesday morning he’d “Just returned from Cave 3,” referring to the rescuers’ command center inside the sprawling cave. He posted photos of the cave interior and a video showing people working their way through chest-high water.
Musk has offered a “kid-sized” submarine, named Wild Boar after the kids’ soccer team, to help in the rescue operation. He posted videos of the sub being tested in a swimming pool in California with simulated narrow passages like the cave.
Divers have rescued eight of the boys. Four boys and the coach are still deep inside, and authorities have indicated they’re continuing with their so-far successful effort to bring the boys out guided by experienced divers.