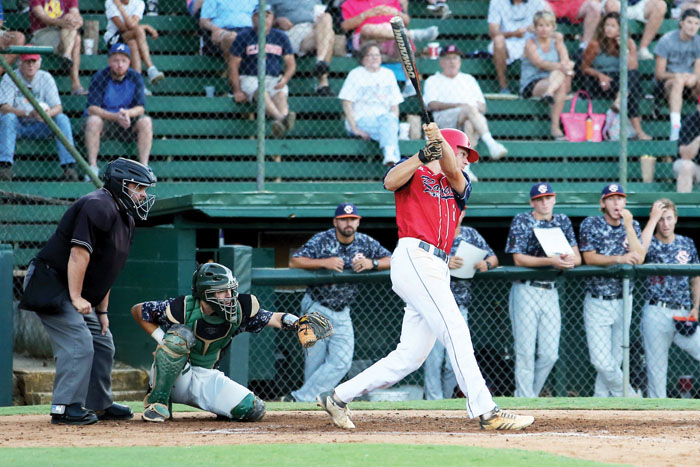 Hayden Setzer triples and drives in John Owen to put Rowan up 4-2. Photo by James Sipes, for the Salisbury Post.

The Rowan County left-hander was full of surprises in an 8-2 victory against Stanly County — a triumph that completed a three-game sweep in the Area III, best-of-five second-round series.

“He came out firing his fastball tonight,” catcher Trevor Atwood said after Rowan (25-6) won its 10th straight game and topped Stanly for the seventh time this season. “I felt the energy with him on the mound. Normally, his curveball and off-speed pitches carry him. It seemed like he really wanted to win and that made the whole team want to compete for him.”

Rowan advanced to the area semifinals against the winner of the High Point-Davidson County series. Game 1 of that best-of-five is scheduled Thursday night at Newman. “We’re starting to feel pretty good about the team,” said outfielder Hayden Setzer. “We’ve got a deep pitching staff and may be able to go far.”

Durham was the story last night. Trusting a low-80s fastball that was swift and alive, the rising West Rowan senior pitched a complete-game six-hitter. He struck out eight, walked none and faced only 26 batters — just five over the minimum — in an efficient, 77-pitch effort.

“In my bullpens, I’ve been trying to get more extension,” Durham said. “I’m reaching back as hard as I can and extending toward the plate. It gave me an advantage on some of the hitters tonight.”

Durham was deceptively effective – using the same arm slot and release point when throwing his giddy-up fastball or mesmerizing curve. He allowed an earned run in the top of the second inning and an unearned run in the fourth, retired 10 of the last 11 Post 76 batters and set the side down in order three times.

“I thought he got better as the game went on,” said Rowan coach Jim Gantt. “He made better pitches and actually change speeds on his breaking ball. He threw some hard — when he needed an out pitch — and threw some soft. He and Atwood recognized what they had to and when.”

The loss ended the season for Stanly (9-18) and third-year coach Jordan Sells, who gave Durham a glowing endorsement.

“He had fastball command,” Sells noted. “You don’t necessarily need a lot of velocity to get people out. What helped him was staying around the strike zone and not giving us any free bases. When you’re able to throw strikes, you control base-runners and at-bats.”

Rowan took a 2-1 lead against Stanly right-hander Tyler Captain in the bottom of the third. Setzer’s run-scoring groundout and Chandler Lippard’s RBI-single — on an 0-2 pitch with two away — erased an early deficit. Stanly tied the score in the fourth on an infield error before Post 342 erupted for three runs in the last of the fifth. Runs crossed on CP Pyle’s sacrifice fly, Setzer’s sinking triple to left field and Clayton Gilmore’s two-out single to center.

“They do all the small things,” said Sells. “They work the pitch count, they put the ball in play and get hits when they need them.”

Rowan plated its final three runs against hard-throwing reliever Ryan Baucom in the sixth. One scored when three base-runners tagged up on a Wayne Mize sac fly. Another crossed on a wild pitch and the last when Pyle legged out an infield hit to the left side.

But make no mistake — Durham earned the headline for this win.

NOTES: High Point (15-6), the No. 2 seed out of the Northern Division, owns a 2-games-to-1 lead over Davidson, with Game 4 scheduled tonight. … Setzer and Pyle each had two RBIs. … Rowan second-baseman Bryson Wagner celebrated his birthday. … Gantt said right-hander John Owen (6-1) will start on Thursday.