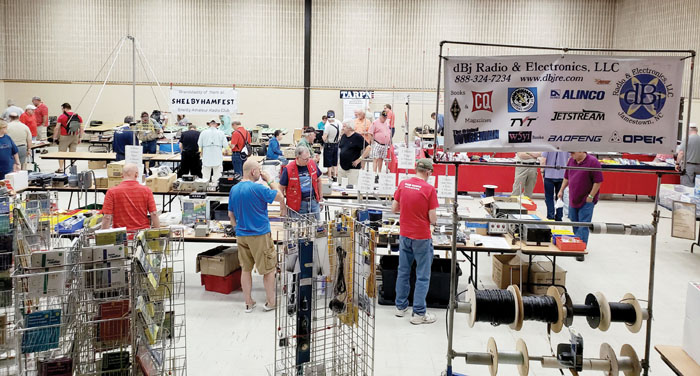 SALISBURY — Deborah Councilman and her husband probably set up their shop AC & DC Electronics about 30 times a year. The two were vendors at the Firecracker Hamfest, an event for amateur ham radio operators who want to buy, sell or trade electronics and other equipment.

Rowan Amateur Radio Society hosted the event, which is in its 33rd year, most of which has taken place at the Salisbury Civic Center. Organizers estimated about 500 people attended the Saturday event.

Councilman and her husband traveled from Greensboro to attend and set up a booth. The couple have been in business 40 years and most of that business has been through the festivals and shows they participate in, Councilman said.

Spriggs said they had vendors and attendees from Virginia, Georgia, California, all over North Carolina and locally. He said a couple visiting from California attended the event.

“We are a group of people who like to talk on radios and connect with people all over the world,” said treasurer Frank Waring.

“Everyone buys, sells or trades and shoot the bull,” Waring said.

Spriggs said the interest in amateur radio operation is ever-evolving. He said its gone from a beginning in military communication to digital platforms.

Many of the club’s members are specially trained for emergency communications, are severe weather spotters while others take part in community emergency response teams assisting with search and rescue, first aid and damage assessment.

The Rowan Amateur Radio Society was founded in 1937 and meets the second Monday of each month.

‘This one’s for you, Mr. Peck’: Frances Shepherd’s trip…