‘This one’s for you, Mr. Peck’: Frances Shepherd’s trip to the Galapagos Islands 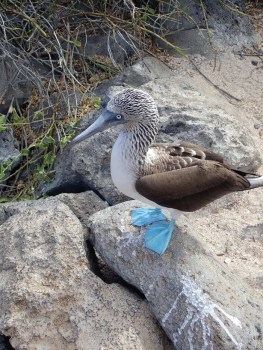 he aptly named blue-footed booby on the Galapagos Islands. 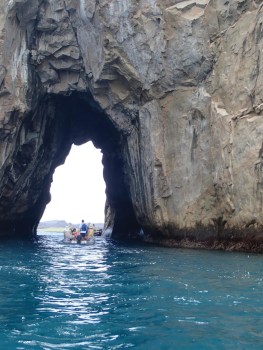 Frances Shepherd, who taught science for 42 years in Rowan County schools, visited the Galapágos Islands with a tour group. The islands are known for their diversity of plant and animal species and as the place where Charles Darwin studied and developed his theory of evolution. 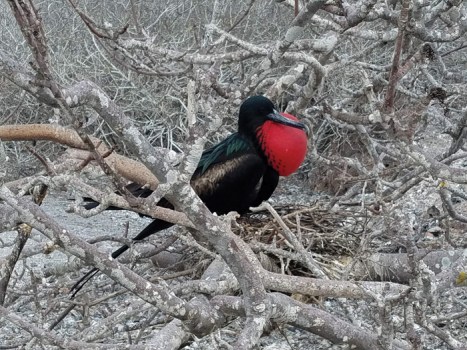 Among the exotic birds Frances Shepherd saw in the Galápagos Islands was the frigatebird, left. The male attracts a mate by inflating a bright red gular pouch under its chin.

In 1964, Frances Shepherd got in trouble at school and found herself alone in the library, the sunlight shining down on her as she sat at a small table.

Before her was an open issue of National Geographic. The magazine had pictures and stories about an exotic archipelago, the Galápagos Islands. Ever since that day, Shepherd has been fascinated by the islands, and through the years she learned as much as she could about them.

Little did she know that she would one day visit the Galápagos Islands as a grown woman.

Shepherd laughs about the day she got in trouble, with an air of understanding that it was all for good.

“I have a boom-box mouth, and if the teacher didn’t control the class, I did it,” said Shepherd with a laugh.

Growing up, Shepherd was a self-professed science kid, and her passion to study science grew as she got older.

While Shepherd’s first exposure to the islands was in National Geographic, her interest in the Galápagos was heightened in high school when her biology teacher at East Rowan, Jerry Peck, talked extensively about the islands and the theories related to them.

Shepherd continued to learn more about them as she grew up and dreamed of visiting them someday. She was impressed that people living on the islands sought to maintain a healthy and relatively untouched habitat for the animals living there.

Shepherd taught science at multiple schools in the Rowan County area for 42 years. She was married and had two children.

This May, she finally got the opportunity to go on her long-awaited trip to the islands. Her son went with her.

Quickly, Shepherd realized that the trip was no vacation. It was truly an expedition.

“This trip isn’t for the faint of heart,” she said.

During the eight-day trip, Shepherd visited seven islands in the Galápagos Archipelago.

The Galápagos Archipelago is part of Ecuador in South America. There are 21 volcanic islands in the archipelago, all home to extremely rare species of birds, fish and other creatures. The islands are largely known for being the place where Charles Darwin studied when forming his theory of evolution.

In 1959, some 97.5 percent of the islands were declared a national park. Since then, the islands have been dedicated to research by the Charles Darwin Foundation. Ecuador has tried to maintain the integrity of the islands as much as possible and use them for observational research and some tourism.

Shepherd and the 15 others on the trip traveled and lived on a boat for eight days. The boat would sail overnight while the passengers were sleeping, and they woke up at a new island each morning.

Shepherd and others would swim as much as three miles per day observing the rare fish and crustaceans of the islands. She said that growing up, she was a competitive swimmer, and even now she swims every week at the YMCA. Because of that, she was able to keep up with the others.

People from all over the globe were on the tour. France, Switzerland, Austria and various parts of the United States were represented.

Shepherd’s most memorable experience swimming near the islands was when two hammerhead sharks swam directly underneath her.

“After that, I looked for the group and made sure I swam right up in the middle of them so that I wasn’t shark bait,” said Shepherd.

Shepherd said so many experiences she had on the islands were like watching something on TV.

She had never seen schools of fish so large in her life. A special moment was when she saw a school of clown fish.

“I saw Nemo, but I didn’t find Dory,” Shepherd said with a laugh.

On land, there were many species of vibrantly colored birds, and Shepherd found special interest in these. Her favorite was a blue-footed booby, a bird with a large wingspan and bright blue feet.

Another exotic bird was the frigatebird, which were in mating season. To attract a mate, male frigatebirds inflate a bright red gular pouch under their chins. The color makes the birds looked proud and confident, according to Shepherd.

Shepherd said her favorite part of the trip was being able to see a place that she had only seen pictures of. It was surreal to see it all in person.

“I just want people to realize that God gave us a beautiful earth and for us to be good stewards … to protect things, so that we can all enjoy it for generations to come.”

Shepherd said she can’t stop smiling when thinking about the trip. She knows her teacher, Mr. Peck, would have been proud and excited about her adventure.

“When I stepped my feet onto the Galápagos Islands off that plane, I raised my hands and I said, ‘Mr. Peck ,this one’s for you’ because he’s in heaven now,” said Shepherd.

“He took an interest in me as a student. He was one of those teachers, you know. I worshiped the ground he walked on. … I couldn’t help but just think of him the whole time, when I heard that I was able to go to these islands,” said Shepherd.

Shepherd said several teachers have asked her to talks about her trip to the East Rowan Science Club. This is the very club that Peck founded when he was teaching there. Shepherd is a charter member.

“Peck told me, ‘Frances, your honors and your rewards won’t be here (at school), but out in life. … Just keep dreaming, because things will happen.’ And a lot of good things have happened. I’ve been blessed.”