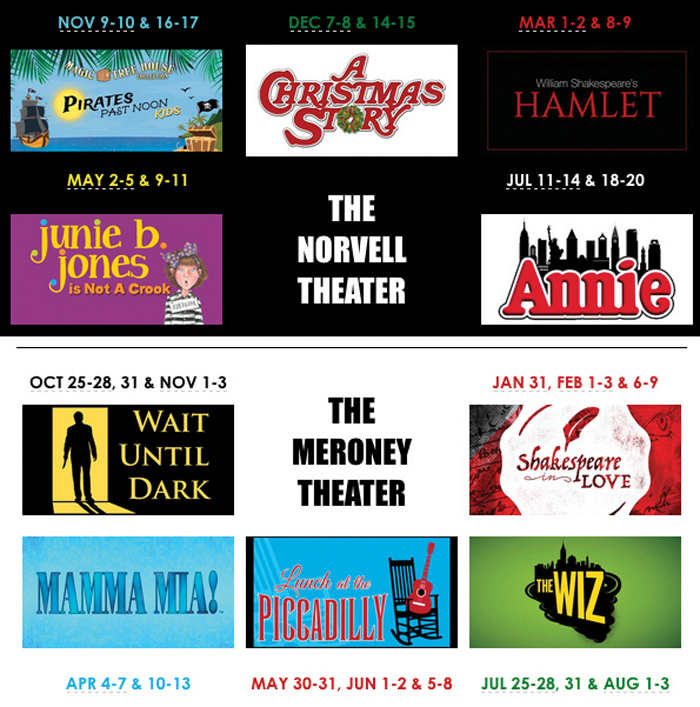 Suspense. The sale of a nursing home. Shakespeare, ABBA, and The Wiz — it’s all a part of the 58th season of Piedmont Players Theatre. Likewise, the Norvell Theatre is producing a similar variety of youth productions.

The Meroney kicks of its season of shows with “Wait Until Dark,” Oct. 25-28 and Oct. 31-Nov. 3.
“Every year, we’re always open for ideas,” says Reid Leonard, PPT’s resident director. “Everyone always asks us to do a murder mystery, and you read a script, then a third of the way through, you figure out who the villain is.”
“Wait Until Dark” is based on the classic 1967 film starring Audrey Hepburn, Alan Arkin and Richard Crenna.
“Even if you know who did it,” Leonard says, “the script still works.”

Also playing at the Meroney:

• “Shakespeare in Love,” Jan. 31-Feb. 3, and Feb. 6-9, 2019.
Based on the 1998 film and winner of six Academy Awards including Best Picture and Best Actress, “Shakespeare in Love” is one of the most popular shows in the country right now, Leonard says, because the rights have just been released.
“It’s one of those we’ve been wanting to do,” Leonard says. “We have kids over at the Norvell doing Shakespeare plays. Now all we gotta do is find Romeo and Juliet, Shakespeare, and Queen Elizabeth I.”

• “Lunch at the Picadilly,” May 30-June 2, and June 2-8, 2019.
Lovers of North Carolina author Clyde Edgerton will want to see “Lunch at the Picadilly.” The music is written by Mike Craver, who also wrote music for “Smoke on the Mountain” and “Sanders Family Christmas.”
In this musical, the Rosehaven retirement home has been sold to Ballard College, and the residents are not happy about it. They’ve already noticed a difference in the cornbread. So they set out to change the world — and get out of their rocking chairs to do it.
“Lunch at The Picadilly” follows two of Edgerton’s other shows: “Raney” in 1996, and “Walking Across Egypt” in 2001.
Leonard says he really hopes seniors will audition for these roles. “There are a lot of very talented people in this community who aren’t 12 or 20.”

• “The Wiz,” July 25-28, and July 31-Aug. 3, 2019.
Likewise, Leonard says, there are many talented African-American actors in the area —thus the reason for “The Wiz.”
Based on “The Wizard of Oz,” this musical features an African-American cast with a dazzling mix of rock, gospel, and soul music.

The Norvell kicks off season 7 with “Magic Tree House — Pirates Past Noon,” Nov. 9-10 and 16-17.
The theater has a long-standing partnership with the Rowan-Salisbury School System, and this show serves as the introduction to theater for the county’s second- and third-graders. The kids will learn how to take a story and turn it into a play, Leonard notes. “This is their introduction to how it all works.”
Leonard chose this play, he says, because this year marks the 500th anniversary of the death of Blackbeard, and the state is observing the milestone in a variety of ways. He also thinks the “Magic Tree House” series appeals equally to girls and boys.
This is the third of the “Magic Tree House” series the Norvell has produced — and yes, they build the tree again every time, he says.

Although it’s not part of the regular season, Piedmont Players Theatre is partnering with the Rowan County Arts & Ag Program to bring “Charlotte’s Web” to Patterson Farm. Performances are Oct. 12-13.

Also playing at the Norvell:

• “A Christmas Story,” Dec. 7-8 and 14-15.
“You’ll shoot your eye out!”
The beloved film, “A Christmas Story” comes to the Norvell stage as a play.
“There’s a big, monster musical that’s coming to the Blumenthal,” Leonard says of the hilarious story, “but this is not the musical. This is the straight show.”
The play follows humorist Jean Shepherd’s memoir of growing up in the Midwest in the 1940s, with 9-year-old Ralphie Parker in his quest to get a genuine Red Ryder BB gun under the tree for Christmas.
The lamp shaped like a woman’s leg, the family’s temperamental furnace, and a wet tongue stuck on a cold lamp post — it’s all part of the show.

• “Hamlet,” March 1-2 and 8-9, 2019.
One of Shakespeare’s most famous tragedies has been on the Norvell agenda for a couple of years now, Leonard says. “After we did ‘The Scottish Play’ (theater people never call “Macbeth” by name), we decided we needed to think about doing ‘Hamlet.’ But with the political climate of the past couple of years, we decided we had to do ‘Julius Caesar’ first.”
But he still wanted the young actors to tackle “Hamlet.”
A theater friend’s son once asked, “Do you know how many famous lines are in that play?”
“It’s all famous lines,” Leonard quips.
The play will be performed for the county’s eighth- and 11th-graders.