My Turn, Eric Hake: Immigration in the age of globalization 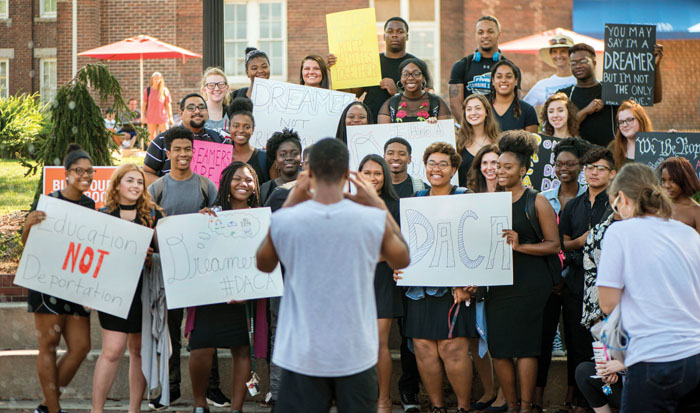 As pointed out at the recent “Families Belong Together” rally, local business owner and immigrant Evelyn Medina noted the adoption of zero tolerance policies at our borders suggests America is overlooking an important point about globalization. Rather than assume migrating people are simply showing up unbidden at our borders, we should recognize what the larger process of globalization has done – both to pull migrants to America and also push them out of their homes.

Globalization – which accelerated in earnest some 40 years ago – is simply the latest in a long line of titles given to the political promotion of business and trading interests. And, like those earlier periods of history, globalization was also assumed to naturally benefit everyone, with falling prices, greater efficiency in production and more integrated and connected markets. The whole thing has been awe-inspiring, thrilling and more than a little unstable. But the ultimate goal has remained the same – greater integration of economic activity on a grander scale.

What has globalization done for business? In our lifetime, we have experienced the international integration of the supply chains that were born and knitted themselves across the country in the late 19th century, then stretched across our continents in the early 20th. Now, these supply chains and their private bureaucracies have wrapped themselves around the globe.

While we usually describe this as the growth of markets, the process includes in large measure the replacement of arm’s-length market trades by planning systems we call corporations. Even though there are systemwide issues of stability, the fact is planning works better than basing production and distribution on constantly fluctuating contracts and prices. And some of those global supply chains need and want a large supply of renewable lower skilled labor – such as American factory farming, meatpacking, construction.

What has globalization done for people? Like those earlier episodes of economic development, the consolidation of global supply chains has led to increased opportunities for some, while dislocating other segments of the population. As in the late 19th century, our current era has been marked by declining global price pressures, increased volumes of production and the loss of local cultures.

While there is no benefit in romanticizing the short life of the rural poor, we should realize that those local systems of production and allocation cannot compete with the bounty of our industrial process. As profit centers are consolidated into our supply chain, incomes drain out of the periphery, governments destabilize and the most at-risk people must begin looking in earnest for opportunity elsewhere.

Some can and will migrate to their own cities, finding opportunities within the newly integrated business chain. And some can come to America, work in the firms that are out-competing their indigenous businesses, and then remit their incomes back to their families. It is not a situation where everyone uniformly benefits. To hold on to the hope that the dislocation of globalization is always and everywhere magically resolved over time is to ignore the most basic saw of economics: Life has benefits, and life has costs. Pragmatic people and their governments should set about to the task of pursuing the benefits, while managing the costs.

What has globalization done for governments? Just as America has seen the shuttering of plants, the decline of longstanding opportunities for small business, the conversion of the business owner to a local manager, from profit to contract, the countries on our border have also seen a profound dislocation. If we think this has been a struggle for America, we could try to imagine how this would look in a country with limited democratic traditions. While the disruption seems less brutal than the gunboat diplomacy and banana republics of previous generations, the use of soft power still has a compelling edge. If the number of people losing their way on the path of globalization outstrip the winners, how easy will it be for some of these countries to slide into authoritarian regimes, as they watch the rise of mafia and crime networks?

The narrative of the last 40 years has assumed that the benefits of globalization will always and everywhere outweigh the costs and burdens of adjustments. If that had turned out to be true, it seems we would be a little less nervous and a lot more generous. Perhaps our politics would not have fragmented us into a system of polarized tribes? Simply put, the tenor of the times does not seem very gracious. How else could we arrive at the solution of stripping children from their mothers?

Perhaps, if we want to make America good again and set it on the path of a more durable and stable society for all, we’ll recognize that the myth of a perfect free market or the perfect path to globalization was just another variation of the American Dream — something most easily believed while asleep. Maybe the cries of children will be enough to wake us.

If we do, maybe we could reconsider our immigration policies. Perhaps we could come up with some way to embrace young families and their children as economic refugees and entrepreneurs, rather than illegal immigrants. Changing the labels can change the debate. This could help us recognize a vibrant source of economic growth, and legitimate their paths to paying taxes, integrating into American society, and becoming respected and valuable members of our communities — just like the generations of immigrants that preceded them.

Perhaps as well, we should reconsider policies that help stabilize economic development and opportunity on the periphery. Perhaps we should realize when we export criminal elements from our society, we are simply relocating them to terrorize and prey upon an even more fragile community. Perhaps we should plan to do something more than simply ignore the larger connections of a globalized economy.