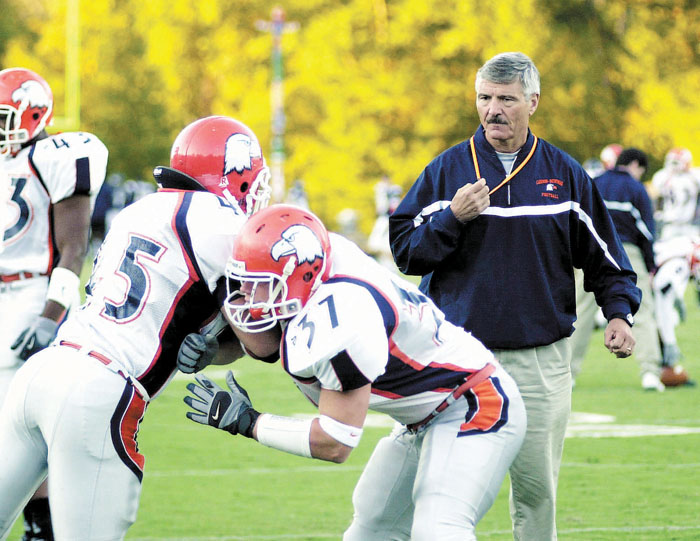 SEVIERVILLE, Tenn. — Carl Torbush occupied the sports spotlight for decades, but there are still things people don’t know about a guy who spent his early years in East Spencer.

For one thing, he considers livermush a delicacy.

For another, while he rose to fame as a college football coach, he gave his heart to baseball a long time ago, the first time he saw Mickey Mantle swing for the New York Yankees.

And who knew that Torbush qualifies as the world’s youngest 66-year-old?  He still plays baseball, real baseball, not fantasy baseball. He’s still out there swinging against college players in a men’s league in eastern Tennessee.

“I don’t catch much anymore,” Torbush said. “But I play first base and I get my share of hits against those 21-year-old pitchers. It doesn’t make them happy when a guy who could be their grandpa gets a hit.”

There was an era when Torbush pulled off that macho, sunglasses-and-mustache look almost as well as Burt Reynolds, but he’s made a smooth transition to hyper-active, silver-haired senior citizen. He possesses a sharp sense of humor that kept him sane during challenging times in the coaching profession. Compared to most of those intense, defensive masterminds, Torbush is practically a stand-up comic.

Torbush returned to his Rowan roots last week with his wife, Janet. He made a pit stop at Newman Park for Rowan County’s American Legion baseball game with Kannapolis. He knows Rowan Legion/Catawba College coach Jim Gantt well. One of Torbush’s coaching ventures was at his alma mater, Carson-Newman, and he had the opportunity to watch Gantt’s Catawba clubs play the Eagles.

“Newman Park is a great ballpark, such a beautiful field, and Jim puts so much work into it,” Torbush said. “This was my first time seeing a game there in more than 50 years. The last time I was 11 and Salisbury had a Class D minor league team playing there.”

While he was in town, he also visited the East Spencer neighborhood where he grew up next door to future East Carolina football player and Davie County wrestling coach Buddy Lowery. That street was renamed Torbush Drive years ago. He explored the old Eighth Street Ballpark where he played Little League ball and his uncle, Frank Wilson, hurled no-hitters. He checked out all the railroad spots in Spencer and dined at multiple barbecue restaurants. For the record, Torbush refers to barbecue eateries as “joints,” and his wife said no thanks to the joys of livermush.

“I won’t try to tell you every place we ate because I’ll leave someone out, but I ate frequently and drank lots of Cheerwine,” Torbush said. “I think Salisbury is the only place in the country where they still have livermush on the breakfast menu. I enjoyed it, but those weren’t good days for my cholesterol.”

Rowan County sports history might have gone differently had Torbush gone to high school at North Rowan and played for the Rowan County American Legion team. No doubt he would’ve starred in baseball and football for the Cavaliers, but his family moved before he entered seventh grade. Torbush’s father was a railroad man, a brakeman and a yardmaster on the East Spencer side of the Southern Railway tracks. When his father was promoted to terminal trainmaster in Knoxville, Tenn., the family moved.

“I hated leaving East Spencer,” Torbush said. “But because of my dad’s job I had a train pass, so I could ride anywhere for free. That first summer after we moved, I’d take the train from Knoxville to Hickory and then to Spencer to play Little League baseball at the Eighth Street park. I’d stay with my grandmother on Walker Street in Salisbury.”

Torbush was a proud member of the first Austin-East graduating class in 1969. He and and his wife attend all the reunions. The 50th is coming up next year.

A linebacker, Torbush successfully walked on to the University of Tennessee football team, but he was buried on the depth chart. A transfer to Carson-Newman proved to be one of the better decisions of his life. At Carson-Newman, in Jefferson City, Ten., Torbush became an NAIA All-American in football — and baseball. Torbush credits Carson-Newman football coach Dal Shealy and Austin-East baseball coach Bob Polston as the men most responsible for him becoming a coach.

Torbush played a summer of pro baseball in 1975 with a Kansas City Royals’ rookie league team, but it didn’t take him long to make a candid assessment of his future. He wasn’t going to make the majors as a catcher.

“I just didn’t have a strong enough arm, couldn’t get the ball to second base quickly enough,” Torbush said.

Coaching was the next best thing to playing, so that’s where he headed next.

He got his foot in the door while earning a masters degree as a graduate assistant at Baylor. That was a springboard to a unique situation in 1976 at Southeastern Louisiana University. Torbush served as an assistant football coach (linebackers and defensive ends) as well as the head baseball coach.

“I doubt if there are many people who have coached those two sports at that level at the same time,” Torbush said.

He was a 25-year-old baseball coach leading 21-year-old players. He likes going to those reunions. He looks younger than most of the guys he coached.

After four seasons at Southeastern Louisiana, Torbush reached a crossroads. He’d always believed that his future was in coaching baseball, but when SE Louisiana head football coach Billy Brewer was hired by Louisiana Tech after the 1979 season, Torbush accompanied him with the titles of assistant head coach and linebackers coach. That wasn’t a mistake, but it was a life-changing decision. From that point forward, Torbush was a football coach and baseball was a hobby.

After Louisiana Tech went 10-3 in 1982, Brewer was hired by the University of Mississippi, and Torbush moved with him. He held the defensive coordinator title for the first time, and he was coaching in the big-time.

Mississippi’s 8-3-1 1986 season provided Torbush his first shot at being a head coach. He was hired by Louisiana Tech.

He was there only one year. Mack Brown, who had successfully revived Tulane’s program, had been hired for a rebuilding job at UNC. Brown wanted Torbush to be his defensive coordinator and linebackers coach, and the rest of what happened over the next decade with Brown, Torbush and the Tar Heels is well-known history.

“The biggest factor in making that decision to go to Carolina with Mack was it was a chance to go back to the state where I was born and grew up,” Torbush said.

“Mack Brown was personable and a great recruiter we started getting better and better players,” Torbush said.

Waves of NFL prospects helped, but Torbush also was masterful as a defensive coordinator, skilled at both motivation and schemes. From 1992 to 1997 — six straight seasons — the Tar Heels allowed the fewest yards per game in Division I.

After Brown announced he was heading to Texas, Torbush, who was 47 then, was named head coach on Dec. 8, 1997, becoming the first native of North Carolina to lead the program since 1943. Torbush started with a bang, leading the Tar Heels to victory in the Gator Bowl three weeks after his promotion.

The Tar Heels managed winning records in two of his three seasons as head coach, but his tenure lasted only through 2000.

He landed on his feet as Alabama’s defensive coordinator. Not long after that, it was major decision time again for Torbush. When head coach Dennis Franchione exited Alabama for Texas A&M following the 2002 season, for reasons that still aren’t clear, Torbush went with Franchione. That’s a decision he does look back on with some regret. Had he stayed at Alabama, who knows? He may have wound up as the Crimson Tide’s head coach at some point, and that has become the premium college football job in America.

“Up until then, I’d had a pretty stable career,” Torbush said. “After Alabama, I became a little bit of a gypsy.”

Torbush’s stay in Texas A&M was brief. Next came sojourns to Carson-Newman, Mississippi State, Kansas and Liberty. Wherever he went, he brought class and integrity  — and defense.

He announced his retirement in 2011 after a prostate cancer scare, but he beat that.

Eventually there was a phone call from his friend, Phillip Fulmer, who had been the head coach at the University of Tennessee from 1992-2008. Fulmer was a consultant for East Tennessee State, which was looking to get back in the football business after being dormant for 10 years. Fulmer believed Torbush was the ideal coach to get a program started, and Torbush answered the bell. It would be his last great challenge.

There were no players, no stadium, no uniforms and no helmets on campus when Torbush was introduced as ETSU’s head coach in June 2013. His task, which appeared impossible at the time, was to put a team on the field in 2015 and to compete in the Southern Conference.

He turned in some of the finest coaching of his long career. He coached the Bucs three seasons and his teams somehow won 11 of 33 games. There was a victory against Western Carolina at Bristol Motor Speedway and a win over a ranked Samford team. He retired in December with a rising team and a splendid mountain stadium in place, with the program on solid ground and with a $500,000 payday for the program coming up when it plays at Tennessee in November.

He was offered another contract to stay on and continue his good work, a five-year deal, but he knew it was the right time to step aside. He didn’t want to still be coaching when he was 71. Those are long, hard work days.

He feels satisfaction with what he accomplished at East Tennessee. Now it’s time to sip the Cheerwine, to chew the barbecue, to watch football  — and, yes, to get a few more base hits off the 21-year-olds.

“I know this is my third retirement, but this one will stick,” Torbush said with a chuckle. “The time is right. I feel at ease.”