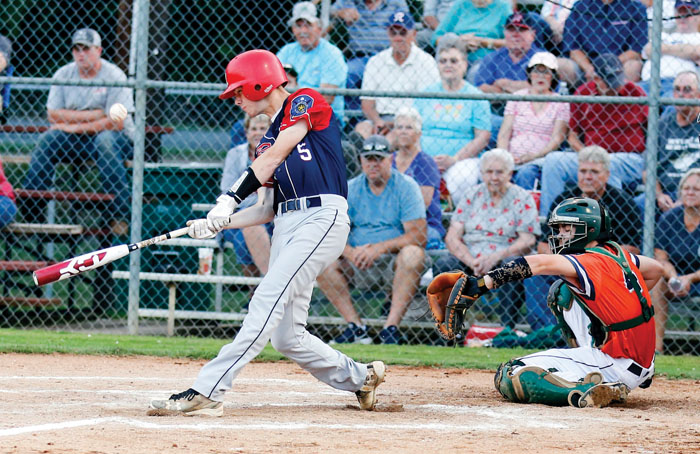 It was a bizarre “blowout” in the second round of the Area III playoffs, as Rowan took a lot of pitches and took a come-from-behind victory.

Rowan beat Stanly for the sixth-straight time this season and the 11th consecutive time overall, but it had sand kicked in its face the first four innings by Post 76’s Jordan Howard and Jake Allen and trailed 3-0

Even after Rowan managed a 4-3 lead, it appeared to be in desperate trouble as late as the bottom of the sixth. But then came that parade of walks in the seventh and the deceiving final score.

“We really didn’t do much of anything,” Rowan coach Jim Gantt said.

Rowan claimed a 2-0 lead in the best-of-five second-round series. Rowan (24-6) had a first-round bye. Rowan will look for the series clincher tonight at Newman Park, with lefty Daniel Durham the probable hurler.

Allen, the losing pitcher in Game 1 of the series was serving as the DH. He slapped a two-out, two-run single in the first inning off Rowan’s lefty starter Maddux Holshouser.

Meanwhile Howard was tying Rowan sluggers in knots with breaking balls. He was able to work around walks and Clayton Gilmore’s double, and carried a 2-0 lead to the bottom of the fourth. That’s when Allen struck again, lining a base hit to score Lukas Scott for a 3-0 Stanly advantage.

Rowan got two runs back in the fifth. Mostly it was free passes. Wayne Mize singled home a run to cut Stanly’s lead to 3-2.

Rowan took a 4-3 lead in the sixth. John Owen walked, Garrett Alewine bunted him to second, and passes to Bryson Wagner and Hayden Setzer filled the bases. Clayton Gilmore hit a one-out groundball that turned into mayhem. Stanly got a forceout at second, as Owen scored the tying run. The throw to first trying to complete the double play got away, and Wagner came around for with the go-ahead run.

Stanly (9-17) still had every chance to pull the game out, especially when a tiring Holshouser, trying to protect that one-run lead, walked the lead-off man in the bottom of the sixth. Daniel Sell relieved Holshouser and walked the next one.

After Seth Grice got a sacrifice bunt down, Stanly had runners at second with one out.

The next two hitters were the most critical of the game, and Sell got some assistance from veteran third baseman John Owen. Owen gloved Hunter Sell’s grounder, held the runners and still got a huge out at first base. Then Sells coaxed a flyball to end the inning.

Rowan’s eight-run inning against a series of relievers came next. Mize got the inning rolling when he was hit by a pitch. Mize also concluded the wild inning, slicing a single  (the only hit of the inning) to score three runs. Mize was setting sail for a double, but he tripped over the first-base bag and went sprawling. It was that kind of night, but Mize didn’t mind. He got on base four times and drove in four runs.

Wagner pitched a clean bottom of the seventh to close it. Sell didn’t get a win or a save, but his pressure-packed hold went a long way toward winning the game.

Rowan had only four hits, but Post 342 accepted 14 walks and four batters trotted to first base after being hit by pitches. Four different Stanly pitchers took part in the plunking.

“Howard did a nice job, kept us off balance, but then his pitch county got up,” Gantt said. “Then we were able to grind out some patient at-bats against their bullpen before Mize came through with that big blow.”