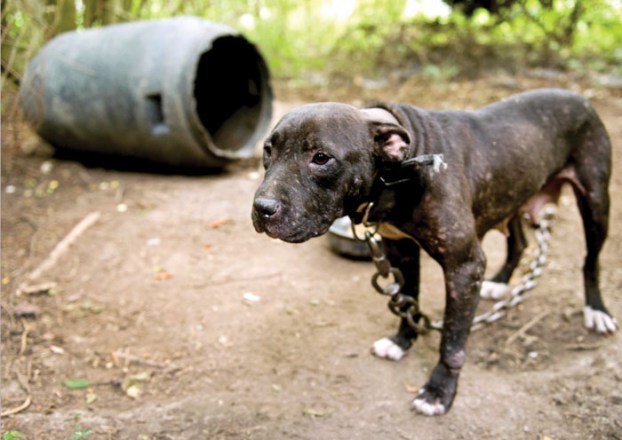 Inside the world of dog fighting: Rigorous training, vicious fights and big payoffs

Bump/Roll — to test a dog

Keep — a rigorous diet, exercise, training program to condition a dog before a fight (six to eight weeks)

Break Sticks — sticks made of wood, plastic, fiberglass, resin or other material used to pry open the jaws of a dog

Champion (CH) — a dog that has won three contracted matches

SALISBURY — Two well-trained athletes enter the ring. They’ve spent six weeks building up to this moment, and only one will emerge a champion.

And the champion will live to fight another day.

This isn’t the plot of a blockbuster movie, but it is what happens inside the world of dog fighting.

The “sport” of dog fighting was thrust into the spotlight locally after the recent seizure of dogs from two Salisbury homes. Although the owner of those dogs, Kelo McCain, hasn’t been charged with any crime, he is the subject of a federal investigation that crosses state lines and involves various government agencies.

The Post reached out to McCain for an interview for this story but did not receive a response.

Dog fighting is essentially pitting one dog against another.

“It’s almost like gladiators,” said Janette Reever, senior manager of animal crimes for the Humane Society of the United States.

Dogs are treated like champion athletes that receive conditioning, training and special diets. Their wins in the ring could net the owner thousands of dollars in profits.

Dog fighting is illegal across the country.

In a search warrant filed by an agent with the U.S. Bureau of Alcohol, Tobacco, Firearms and Explosives, investigators said McCain and others in Michigan are involved in the operation or promotion of one or more dog kennels that exist solely for breeding and training fight dogs.

According to warrants, the ATF, FBI and U.S. Department of Agriculture joined the investigation in November because of the expansive nature of the dog-fighting ventures, the overlap of people involved and criminal activity across counties.

On Jan. 26, 2017, the Salisbury Police Department began an animal-cruelty investigation of McCain. Investigators found that McCain had 42 pit bulls housed at 1111 Kenly St.

Police and animal control officers went to the house and found that the dogs were secured with heavy chains and kept separate from each other. That is indicative of the way fighting dogs are kept, according to the search warrant.

Reever said she is familiar with McCain’s kennel and his name has come up in a number of organizations.

North Carolina ranks high in the incidence of dog fighting and how many operations there are in the state, she said.

She said rural areas lend themselves to dog fighting.

“They keep it where they know law enforcement will have a difficult time finding it. They are very secretive, very cautious,” Reever said.

“Our role is to assist the agencies with providing intelligence on who dog fighters may be in their jurisdictions. I have a lot of informants. We can help put the case together,” Reever said.

Informants assist with gathering details that can’t often be obtained by law enforcement, and they are not paid unless there is an arrest or conviction, she said.

The organization has an extensive database on dog fighting, and representatives know the majority of the people involved and who they are linked with as well as who is at the top of the dog-fighting world nationally, Reever said.

“Eddie” (not his real name) is an informant who works with law enforcement and the Humane Society of the United States. He used to be a part of the dog-fighting world. He maintains those relationships, but instead of participating he provides authorities with needed information.

Eddie shared with a Post reporter what happens before, during and after a dog-fighting match.

“It’s a conglomerate of criminals who’ve come to an agreement to match a dog,” he said.

A fight can be set up between two dogs of the same weight that may not even live in the same state. The two owners agree on a set amount to wager. For instance, both owners could set a match for $100,000. A date and time are set, usually about six to eight weeks out.

In that time, owners take their dogs through rigorous training like any prize fighter.

Most professional-level owners feed their dogs high-protein foods, some of it raw. The dogs walk, swim, use a treadmill, and pull weights from four or five times a week. The training regime includes rest days and, in some cases, dogs receive massages. Depending on the investment, some may receive some form of hydrotherapy.

During the six weeks before a match, the dog may be seen by a veterinarian to make sure he or she is in top condition.

If one party doesn’t show up at the designated time and location, he forfeits a set amount of “good faith” money as well as the fight. The good-faith money is sent to a third party to hold until the fight begins.

Typically, dogs are washed in either rubbing alcohol, Dawn detergent, milk or all three to remove impurities from the skin, which helps prevent any possibility of cheating.

“People think these animals are crazy, vicious; that’s totally false. In the rules of animal fighting, if your dog bites my dog, I lose,” Eddie said.

“You want this athlete to be in the best possible shape. You don’t want to lose your money,” he said.

A fight can last 10 minutes or five hours until a winner is determined. The stakes could be as high as a half million dollars, experts say.

Jane Hartness, executive director of the Humane Society of Rowan County, said the belief that dog fighting is a “hobby” among “street thugs” is false. It’s actually a crime that’s often connected to illegal gambling, money laundering, drug dealing and other organized crime, she said.

“It transcends social and economic classes, often being a moneymaker for otherwise ‘professional’ individuals, even people employed in the legal professions,” she said.

Hartness hopes that anyone who sees something suspicious would report it.

“While ‘better to educate than legislate’ is a valid theory, laws concerning the malicious and heinous act of animal fighting must be enforced, and we must hold those responsible for enforcing those laws accountable,” she said.

Since animal control officers and investigators are not sworn law enforcement, Williams said, they work hand-in-hand with local law agencies to execute search warrants at homes where dog-fighting operations are suspected to be.

“We are more of an educated eye to be used as evidence in court,” Williams said.

He said Rowan Animal Control has had dealings with Kelo McCain, but he did not elaborate further.

“We believe it is a little less now because law enforcement are becoming more knowledgeable,” Reever said.

The unofficial numbers show that about 30 percent of those involved are women.

Reever said dogs involved in fights typically have bites to the scruff, shoulder and haunches.

“Bites to the face and legs are relatively uncommon since the dogs generally do not face off, unlike fighting dogs who rush toward their opponent, face to face, in an attempt to get a good hold,” she said.

Williams said neighbors may see a lot of dogs on a property — anywhere from 10 to 15 or more than 30. The owner may use a privacy fence or set up the dogs in a wooded area.

Authorities found that McCain had dogs at the Short Street property in a wooded area with a number of makeshift dog houses made with large blue plastic barrels.

Williams said the barrels are used because they are cheap.

Chains found on the property are used as a “workout” for the dogs. Dogs are made to carry weighted chains to increase their strength.

“Having to drag the chains all day is a workout,” Williams said.

The dogs typically are close but can’t get to each other. Worn areas on the ground near their shelter are the result of chains that have dragged the ground.

SALISBURY — If you see a turtle on a fence post, it did not get there by itself. Using that... read more