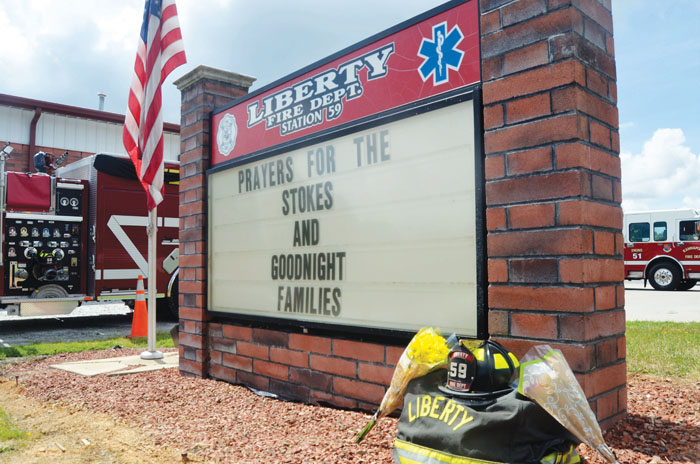 West Liberty Fire Department placed the uniform of Mike Goodnight who died Wednesday while en route to a call. Two women were injured in a crash with Goodnight's pickup. The flag stands at half staff and a firetruck is draped in black to honor Goodnight. Shavonne Walker/Salisbury Post

The last thing Michael Goodnight would have wanted was to be involved in an accident that hurt someone else. He became a volunteer firefighter to help other people.

Yet the sad truth is that Goodnight, en route to an accident on July 4, put on his emergency light and passed a silver Mustang on Gold Knob Road — not realizing the car was about to turn left, according to the Highway Patrol. His Silverado pickup and the car collided. The women in the Mustang were seriously injured. Goodnight was partially thrown from his truck and died.

• Emergency responders put their lives on the line for others; it’s what they do, and they are much appreciated for taking on that job. But responders must take care not to put lives at risk on the way to their calls just as much as they would at the scene of a fire, wreck or other emergency. Split-second decisions sometimes have the most lasting impact.

• Being on the alert for emergency responders is important for all drivers.

• Everyone involved in this crash deserves the public’s sympathy, and Goodnight should be honored for his public service.

The nation needs more Michael Goodnights — more individuals who will join and support volunteer fire departments. According to the National Fire Protection Association, 70 percent of the nation’s one-million-plus firefighters are volunteers. Yet many fire departments have experienced a dramatic decline in volunteers — a fact that could hamper the departments’ ability to provide this essential public service.

Goodnight, 55, had been a volunteer with the West Liberty Fire Department for two years. Helping others was his passion, sister Judy Burris told a Post reporter. Friend Diane Goodman said Goodnight “died doing something he loved to do.”

May he rest in peace.