Community gathers to pray at YMCA 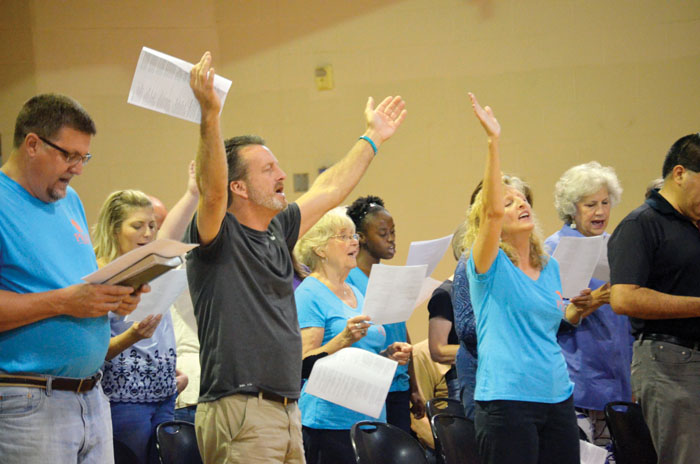 Members of the faith community attended a Pray Rowan event held Saturday at the J. Fred Corriher YMCA in China Grove. In addition to prayers for the community those in attendance sang worship songs. Shavonne Walker/Salisbury Post

CHINA GROVE — In 2012, Evora Bentley and her three daughters were involved in a serious traffic accident that left the girls learning to walk all over again.

Bentley, a Gastonia resident, shared her testimony of triumph over tragedy during a Saturday Pray Rowan gathering.

Pray Rowan was born 10 months ago out of a desire by local residents, pastors and community leaders to lead a change in the community through the power of prayer. About 100 people attended the program held at J. Fred Corriher YMCA in China Grove.

Pastors and others led prayers for specific causes, including the nation, the lost, the incarcerated, marriage and family, elected officials and first responders — as well as churches and the pastors who lead them.

The idea for the program started in 2017 with Father Lucas Rossi of Sacred Heart Catholic Church and organizer Tonya Skelly.

After several acts of violence locally and nationally, Rossi felt led to have a prayer movement or rally in the city. Last year, Skelly began a prayer breakfast that local leaders, pastors and their wives attended. She wanted to have a prayer event.

The two merged their ideas, and other leaders and pastors came aboard. Pray Rowan was formed. After the first program in October, organizers decided to meet once a month in municipalities throughout the county.

Bentley, an author and faith coach, told how her daughters survived a serious car crash. She was uninjured and wondered for a while why she was spared. She said she learned her purpose and that faith was the key to overcoming her obstacles.

Jessica Cloward prayed that God would change and move his people and sweep through the churches.

“We’ve gotten away from the basics,” Cloward said in her prayer. “Let revival come.”

“We will be the change in our city. We will reach out and love them,” she said.

Paula Ngunza, a rising senior at Livingstone College, prayed that anything that has people in bondage would be broken and that they would get back to their first love in Christ.

After individual-led prayers, participants divided into groups to pray about issues for which they have a passion or interest.

Skelly said she feels that what the group is doing is laying a foundation. She said Pray Rowan participants have seen changes in the county and believe those changes for the better are a testament to the power of prayer.

Upward of 200 people attend the programs, and a local school has asked to be considered as a host site.

“I’m truly in pure faith seeking his will every step of the way,” she said of the future of Pray Rowan.

Some people have attended every single program, and the committee is growing as well.

One prayer that the group has made is that similar groups will for in other counties.

“Pray Rowan is the tip of the spear,” Skelly said.

Julius Koonce, pastor of Christ Transformation Center, said his outlook on ministry has changed since attending Pray Rowan events. His church, located on the campus of Hood Theological Seminary, has been in the area for nearly 10 years.

He and his wife, Tammy, attended Saturday’s gathering.

“Sometimes we base our walk with the Lord on our cultural upbringing. I believe God wants us to focus on kingdom culture,” Koonce said.

He said he believes “kingdom culture” supersedes any culture that any man or woman could possess.

Michael Brown attended for the second time. He was initially invited by his pastor, Billy Rollins, who leads the Salisbury campus of the Refuge.

Brown said he returned for a second time because the gatherings are about “kingdom work.”

He’s been encouraged by Pastor Henry Diggs, a member of the Pray Rowan committee. Brown said the events are about “coming together as a community.”