Clyde, Time Was: On fishing, ferries & the silvery Yadkin 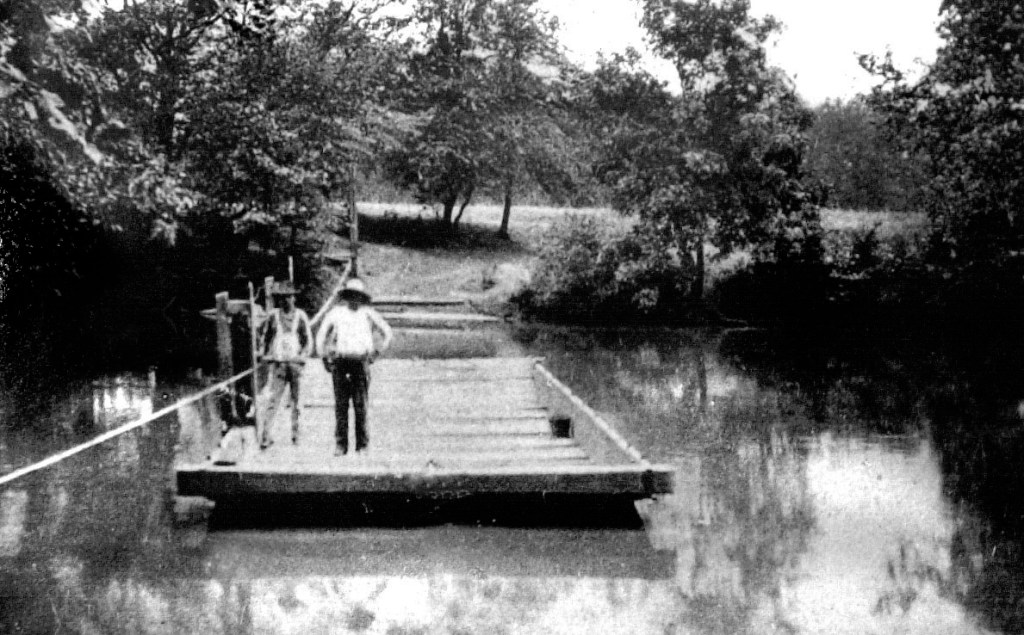 Two people stand on the ferry that crossed the South Yadkin River at the Davie County line. Ferries were built wide enough to hold two wagons. Carrying people across further down the river were the Bringle Ferry, Long Ferry, Stokes Ferry and the Grubb ferry. Post file photo

Time was, we dug fishing worms. Big juicy ones in a tin can and with a cane pole we headed for the river.

“The once swift and silvery Yadkin, an Indian word for ‘big tree,’ has been replaced by a placid old river carrying the topsoil of thousands of farms in its pursuit of the sea,” local historian James Brawley wrote.

The first lands taken up in what is now Rowan were located along Grant’s Creek and in the Millbridge and Jersey Settlements. That was before stormwater fees, when water flowed downhill at no charge. Even in “terra incognita” a river runs through it.

The Trading Ford has seen history come and go and go across at the shallow fords. After that, you took a ferry. Often the court required an operator of a public ferry to establish a tavern for the traveler. Archibald Craige, Adam Torrence and James Smith were a few who ran both. Rates were for a loaded wagon — 6 shillings, for a single footman — 4 pence in 1772.

Mr. Shuping at Franklin can show you where the Young House was that owned the ferry to cross the lonely Yadkin over into Davie County. Meanwhile, over on this side, “We the subscribers leave to represent to your worships the extreme necessity of having a bridge over Swaring Creek on the main road leading to Lexington and Hillsborough. That said creek is very often impassible by reason of high waters, we hope you in your wisdom will provide an order for a bridge to be built at a public expense.” — Signed by Beards, Graves, Lockes, Headricks, Kerrs, Steeles et al., April 1814.

And build it, they did. Ithiel Towne, pre-eminent architect ,used his famous lattice truss in 1818-1819 for Lewis Beard at the cost of $30,000 to contract for a “timber structure, weatherboarded, shingle-roofed, and set on stone piers in the riverbed.” Our own covered bridge.

After a Fayetteville bridge project, he contracted with a Samuel Lemly, a prominent carpenter, to build the South Yadkin River bridge for $2,300, to be “about 200 feet long but equal for beauty and durability to any Bridge in the Southern States.”

Yankees still cross that bridge when they come to it, but all of Mr. Towne’s three N.C. bridges are now lost. The stone pillars stand, silent sentinels sorting the sands and silt of overseers with a short glimpse from the highway, linking us together into one powerful modern United States.

A map in North Carolina  Archives shows early plantation homes along the river of Obadiah Smith, Phillip Beck, Wm. Chapman, Wm. Moore, Geo Smith, Ales and John Long, all north of the Big Island and all but one, gone but not forgotten.

Floating down the river had deeper consequences. “The ferryboat was floating with the current and she drifted in so close … everybody was on the boat. Pap, Judge and Bessie Thatcher, Tom and his old Aunt Polly. Boom! I saw the white smoke squirt out of the ferryboat’s side. You see, they was firing cannon over the water, trying to make my carcass come to the top.”  — Mark Twain.

They still do cranking with an old telephone magneto or trolling or a trot line. Not much noodling, gigging or jugging going on with our Robertson Dynasty cousins and none of those things has anything to do with leaving your barn door open. B.D. in all her trivial lookin’ up stuff for everybody came up with a July 4, 1884, ad for “The steamer Alice is now ready for excursions on the waters of the majestic Yadkin leaving Sowersburg at 3 o’clock p.m. for the ‘point’ at Hanna’s Ferry every Wednesday and Saturday, for the present. For terms and particulars apply to Capt. Chas. F. Pierce.”

No actual photograph of this undertaking has ever surfaced. Tourism, take note. Another place for a microbrewery, down by the riverside. York Hill had that covered with home brew available, when the bear was out in the cage out front, for years.

So keep it rollin’ on the river. Here’s hoping most of your time is going downstream, not swimming against the current. Paddle faster. Drop me a line and bring me a mess of crappies.

Clyde, Time Was: We didn’t know we didn’t have…