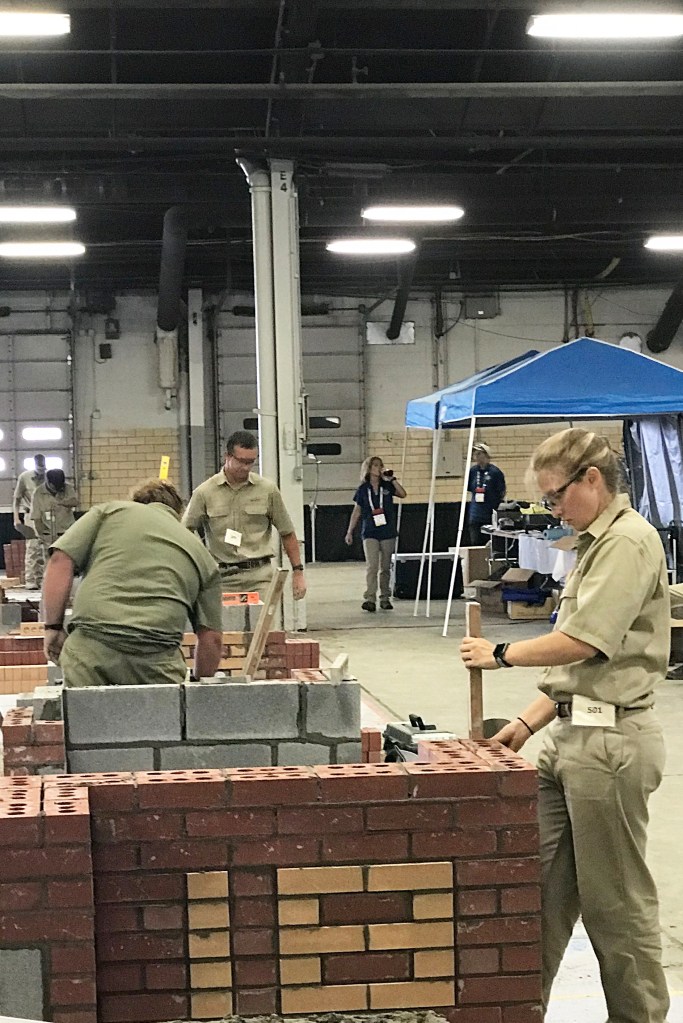 White has only been practicing masonry for a few years — a skill she picked up at West Rowan High School under the watchful eye of teacher Rodney Harrington. In that time, she’s excelled and found her passion.

But that doesn’t mean she didn’t struggle with nerves at the National SkillsUSA competition in Louisville, Kentucky.

“It was big, it was bigger than states,” she said. “…I was pacing back and forth because I was nervous.”

Once she entered the competition room, however, she was able to calm down and focus. White competed against 14 others in the competition’s post-secondary masonry category. She and other contestants were required to spend six hours building a project that required them to plumb, level, lay brick and square corners.

“She had practiced similar projects before,” Harrington said.

White has competed in several competitions, and, after graduating from West Rowan High in 2017, returned to the school nearly daily to practice her brick mason skills.

According to Harrington, White and other competitors received project plans the evening before the competitions, allowing them to strategize and get a feel for the design. He and White discussed and laid out a timeline for the next day.

“She knew exactly where she was supposed to be at what time,” he said.

While White worked laying brick, Harrington said judges, industry professionals and other teachers came up to him to praise her technique, saying they’d “never seen anything like it.”

When the six hours were up, White’s nerves returned.

“I was like, ‘Oh no, I am screwed, this is not good.’ …I didn’t even think that I had won until they called my name,” she said.

But Harrington’s faith in her never wavered.

“We knew that she had built a pretty good project. She did what she had to do. She took care of business,” she said.

The competition was held Thursday morning, and winners were announced Friday night. Not only did White win the gold medal in post-secondary masonry, beating out the 2017 national champ, she also had the highest score in post-secondary and high school level masonry.

It’s a point she couldn’t have reached, Harrington said, without a bit of elbow grease — not teaching or talent. White is a full-time student at Rowan-Cabarrus Community College and works as an intern, but she still makes time each day to practice.

“That’s what it takes,” he said. “You don’t become a state or national champion without that kind of dedication.”

White said she had a good teacher.

“I would not be at this point without Harrington or the good Lord,” she said.

The numbers of women in trade careers is steadily growing, and White encouraged other young women — who were once like her — to give the careers a shot.

After finishing up at RCCC, White plans to transfer to UNC Charlotte and study construction management. Besides that, she said, she plans to follow God where he leads her.

“But I hope his plan for me is to do something in the industry — which I feel is my calling,” she said.