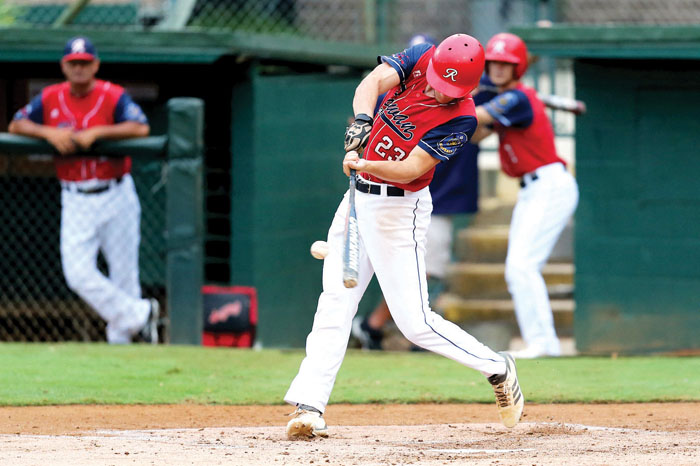 James Sipes / for the Salisbury Post Hayden Setzer gets a single to drive in Cameron Graham and put Rowan up 2-0. Rowan Legion beat Stanly 10-0 on Friday.

A team expected to fly this post-season got its wheels off the ground Friday night at Newman Park, where it snatched an abbreviated 10-0 victory and took Game 1 of the best-of-five showdown.

“The first one’s important,” coach Jim Gantt said after Rowan (23-6) beat Stanly for the fifth time this season. “It worked out for us tonight. John (Owen) did a good job. They’re shorthanded, having played three straight days before this. We know their pitching has to come back around. We’ll take it, but I won’t get too excited about it.”

Rowan scored five times in both the third and fourth innings while Owen and reliever Bryson Wagner handcuffed Stanly (9-16) for five. The mercy rule — reinstated for the playoffs by American Legion officials — was invoked after Post 76 batted in the top of the fifth.

“We knew we had a 10-run lead, but didn’t know the rules allowed it,” said Owen, who scattered three singles and struck out six in 4 1/3 innings. The right-hander won his sixth game of the season and improved to 17-3 lifetime in a Rowan uniform.

“Now we’re playing with the national rules,” Gantt said. “It’s still seven innings, but it’s pro rules and the 10-run rule. There’s no courtesy runners for the pitcher or catcher and no re-entry. We didn’t play like that all year for this very reason – because in the playoffs you can’t do it. We just played it straight up all summer.”

It hardly mattered with Owen providing the spark and sluggers Chandler Lippard and Trevor Atwood dousing the flames with lighter fluid. Lippard barbecued an 0-1 fastball from losing pitcher Jake Allen for a three-run home run and a 5-0 Rowan lead in the last of the third. Atwood whipped a three-run double into the left-field corner an inning later that made it 9-0.

Allen, a fine-tuned right-hander with a deceptive change-up, retired Rowan in the first and second innings without allowing a hit. In the third and fourth, Post 342 threw all of its beef on the grill.

“We just had to time him up the first time around the order,” said Lippard, who added a run-scoring double. “We started hitting him the second time through.”

“Jake Allen didn’t throw the ball that bad,” said Stanly coach Jordan Sells, a Post 76 catcher in 2009 when the teams last met in the playoffs. “He was always around the strike zone. They just hit the baseball. That home run was the big blow, a pitch he left up.”

Rowan finished with nine hits, including singles by Wagner and CP Pyle to open the last of the fourth. Cameron Graham’s sac bunt and a walk to Hayden Setzer loaded the bases for Atwood, who cleared them with a first-pitch double that boosted the lead to 9-0. Rowan’s 10th run crossed when Lippard belted a shot off the left-field wall.

Owen, relying on change-ups and breaking balls, made it all work. And although he induced three groundouts, it wasn’t a signature performance.

“I had a hard time locating the fastball,” he explained. “Whenever you’re missing spots, you need to make adjustments. That’s what I was trying to do the whole game.”

He made his best move with the game scoreless in the top of the third, after Stanly’s Hunter Sells sliced a leadoff single into right field. Working from the stretch, Owen stepped off the rubber, quickly pivoted and picked off the runner for the first out.

“That was pretty key,” said Atwood, Rowan’s veteran backstop. “The first guy up got on and the next guy was going to try to move him over. But the pickoff cleared everything up.”

Gantt, now in his 18th season, praised both Owen and first-baseman Lippard for their heads-up work. “The quick tag made the play,” he said. “John put it in a good spot, down low, where you can make that tag. If it’s up high, it’s tougher. That’s something he works on a lot. And Lippard, being left-handed, is so good at making that tag.”

“The kid didn’t seem like he was very experienced on the basepaths,” Owen concluded. “He wasn’t even looking for it. That pickoff was a turning point in the game.”

Game 2 is scheduled tonight at Don Montgomery Park in Albemarle.

NOTES: Owen was replaced after throwing 76 pitches. That means he can pitch on Tuesday if needed. Allen needed 105 pitches to record 12 outs. … Gantt said either Daniel Durham or Maddux Holshouser, both sturdy left-handers, will start tonight. Stanly will counter with Jordan Howard. … Five-game winner Setzer was encouraged when an MRI on his left forearm revealed only a muscle strain. He may start Game 3 on Sunday night at Newman.