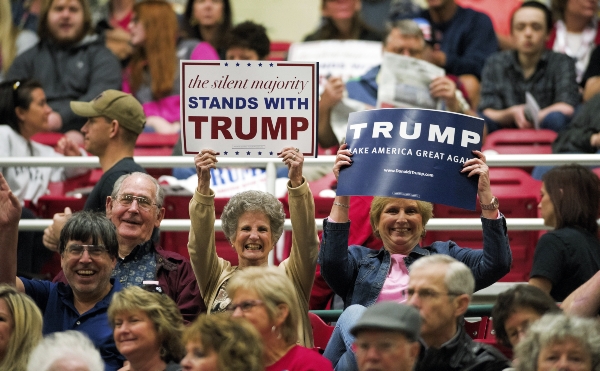 Pearl Graham and Patty Graham, of Kannapolis, hold up their signs in support of Donald Trump for president as they wait for a rally to begin Monday at the Cabarrus Arena and Events Center in Concord in March 2016. Jon C. Lakey/Salisbury Post

Bob Corker, the outgoing Republican senator from Tennessee, recently compared supporters of President Trump to members of a cult. The Washington Post quoted Corker as saying: “It’s becoming a cultish thing, isn’t it? It’s not a good place for any party to end up with a cult-like situation as it relates to a president that happens to be of — purportedly — of the same party.”

Purportedly? It would be nice to know what the Republican Party stands for these days, especially when it comes to spending and debt, but I will leave that for another day.

The Post story says “…the Republican Party appears united now not by fealty to ideas or policies but to a man, who defied the odds to win the presidency and who has magnetically drawn the party’s power base to himself.”

Doesn’t that reasoning also describe the rise to power of Barack Obama and Bill Clinton — the former this country’s first African-American president, the latter the former governor of a Southern state with a great gift of gab, though personally flawed in ways similar to President Trump? Why not label Clinton followers cultists? Why weren’t people who appeared to worship President Obama regarded as blind followers of a cult-like leader?

Corker is right about how the GOP focused less on ideas and more on winning, but that could describe both parties at varying points in history.

What Corker and the Post fail to grasp is the level of anger directed at both parties. Too often, Democrats and Republicans appear to care more about their own political careers than the careers and lives of voters. Trump supporters transcend party loyalty, as does Trump. But — and this is key — they believe he cares about them and so they are willing to forgive his past personal indiscretions and current lies because they think his policies and the more positive direction of the country benefit them more than it does the political and media class.

Cultists reject any evidence that proves their faith is wrong. Trump supporters believe he is taking the country away from elitist snobs who care little about Middle America, except at election time. He is channeling their anger and frustration about broken government and dysfunctional Washington. They are glad he has an opportunity with his Supreme Court appointments to undo some of the judicial activism the Founders never intended for the court to practice and to again make the Constitution central to the nation’s governing life.

They have grown tired of being stereotyped as yahoo hillbillies and uneducated Bible-thumpers who, according to Barack Obama, “get bitter” and “cling to guns or religion or antipathy to people who aren’t like them…” Trump is their revenge and they are enjoying it. Look at the crowds the president continues to draw from his base as he travels. Their level of enthusiasm for him is at the level of a presidential campaign.

The support the president is receiving isn’t just about him. It appears to stem from a sense of gratitude from people who have been ignored by many politicians and now believe they have a champion who listens to and speaks for them. Is he a perfect champion? Of course not. What politician, what human, is perfect? But Trump supporters believe his policies are far better than those advocated by Hillary Clinton and the Democratic Party, which seems to be trending more socialist every day.

People who embrace socialism after its demonstrated failures all over the world —Venezuela and Cuba are two examples — are more like cultists than Trump supporters. And labeling them as cultists will only serve to drive more of them to the polls in the next two elections.