Prep Basketball: Robinson takes his game to a higher level 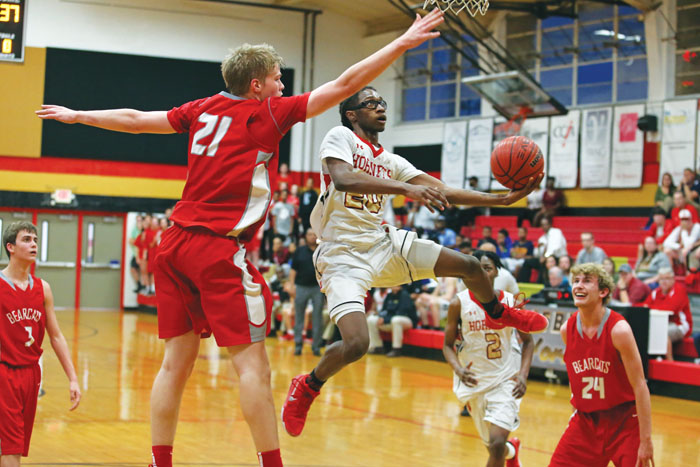 James Sipes/For the Salisbury Post Salisbury’s Oshaun Robinson reaches out around Hendersonville’s Ben Beeker during a game on Feb. 24. Robinson will continue his basketball career at Lees-McRae College in Banner Elk.

Robinson played sparingly for coach Bryan Withers as a varsity sophomore and only averaged about 5 points per game as a junior reserve, but he proved to be a late bloomer. As a senior, he was All-Central Carolina Conference and second team All-Rowan County for a team he helped lead to a 27-4 record, a CCC title and a top-four finish in 2A.

Robinson elevated his game. Now he’s going to get a chance to play basketball at a higher elevation. He’ll continue his education and hoops career at Division II Lees-McRae College in Banner Elk.  Lees-McRae’s claim to fame is that it’s 3,720 feet above sea level. No school east of the Mississippi River plays college basketball at higher altitude.

“They saw me play a few times in high school, but it all happened really late as far as recruiting,” Robinson said. “I was wondering if I was going to get a chance anywhere.”

As a junior, there were isolated nights when Robinson showed he might be a hidden gem. There was a night Salisbury played East Davidson without star Trell Baker. Robinson had to score, so he did. He scored 15, and Salisbury won. That was his career high until his breakout night in the 2017-18 opener last November. Thomasville was in the house at Salisbury. Everyone knew Thomasville was going to be good, but no one realized how good. That game was unbelievable for a 2A contest. Salisbury prevailed, 91-86, in two overtimes. Robinson, who scored 19, missed a potential game-winner at the end of the first overtime, but he came through with the decisive steal-and-layup combo in the second overtime. That sent a message that he was going to be a much more assertive player as a senior.

Pulling out that game — at home — went a long way toward setting the tone for Salisbury’s special season. The Hornets would win their first 10. They didn’t lose until Carson beat them in the final seconds in the championship game of the Christmas tournament. Robinson had a nice tournament, scoring 32 points.

As the Hornets took charge of first place in the beefed-up CCC, the 6-foot-1 Robinson became a glue guy. Some nights he scored in bunches, but on other nights he used his long arms to defend, he grabbed rebounds, or he simply moved the ball to the open man. He had some six-point nights on which he still really helped the Hornets win.

“You try to teach young athletes that you don’t have to score 30 points to be a really good basketball player,” Withers said. “It’s all about finding ways to help your team win, and Oshaun really bought into that. The only thing he cared about was  Salisbury winning the game.”

In late January, Robinson only scored four against North Rowan in a game played at Catawba College, but Withers had him on the floor at the end, and he made the game-winning shot.

In the week that followed, he produced 14 points against Ledford and 17 in a racehorse game with North Davidson.

Robinson had major offensive contributions in home playoff wins against East Rutherford and Hendersonville. Salisbury made it all the way to the regional final before bowing out in a serious struggle against eventual 2A champ Forest Hills in Greensboro.

Robinson finished the season with a 9.3 scoring average. He had 16 double-figure games as a senior, 13 more than he produced his junior year.

“Oshaun can help a college team,” Withers said. “It may not happen right away, and it may not happen his freshman year, but he definitely can help. He just has to go in there and do the same things he was willing to do for us. Every good team needs guys like that.”

“Lees-McRae is going to be a different environment,” Robinson said. “But why not try something different?”

Robinson plans a major in sports medicine or athletic training.